The Midnight Watch By David Dyer

Review by Will A. Davis, Writer -Photographer 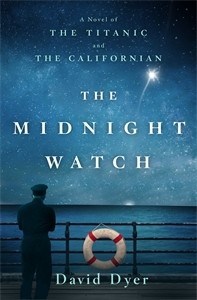 The Midnight Watch by David Dyer

As with many of the previously mentioned events,  the Titanic tragedy would be talked about, investigated, discussed from conspiracy theories to dozens of books written, and of course movies such as the 1950’s “A Night to Remember” and more recent Titanic movies. While the story of the “Unsinkable” Titanic hitting an iceberg and sinking in just over two and a half hours with 1500 lives lost is a well-known, one of the mysteries of that fateful night is why a ship called the Californian, which was in rescue distance of the doomed liner, never attempted to go to the aid of the stricken ship.

Australian author David Dyer has taken on the task of possibly explaining the incident in his new and very readable historical novel: The Midnight Watch. The midnight watch refers to the term used for the hours from midnight to three A.M., when the lookout stations were manned on maritime ships looking for danger of any kind.

Dyer tells his story through the eyes of a reporter for a Boston newspaper by the name of John Steadman. A somewhat morose but creative person whose specialty was dead bodies. Why dead bodies? From a tragic event early in Steadman’s life. Divorced and with two things in his life that seem to matter: alcohol and his daughter. When the Titanic sinks he is sure there will be bodies, lots of them. He will discover though that the Californian under the captaincy of Stanley Lord or as Lord introduces himself : “I am Lord, of the Californian”. The dynamic between Steadman and Lord and an officer on the Californian Herbert Stone, creates a narrative that will last the lifetimes of all three and will crisscross  events of the aftermath of the sinking of the Titanic. Questions will be raised. Why did Captain Lord seem to ignore the communications from the Titanic including eight white rockets fired from her deck, a clear international naval signal of distress. Why did the wireless operator not wake Lord , and why did Stone rip out part of the ship’s watch log? Two international investigations will be launched, one in England and one in the United States. This question and many others will be woven into the fabric of the read as Steadman follows not only Captain Lord but officer Stone as well.

Events on the Titanic are also brought to bear including the infamous lack of lifeboats and half filled lifeboats that were launched. The inclusion of the fate of a family of eleven will elevate this story of heroism and cowardice, pride and status.

Dyer as a young man and before he became a writer, worked at a law firm in his native Australia which represented ownership of the Titanic and investigated the tragedy This gave him access to many important documents and transcripts, plus his research in all accessible areas concerning the Titanic were of obvious use in the writing of this book. He does not profess to have answers to all the mysteries but leaves the reader with other possibilities of what could have happened with the characters and events portrayed. If you are a “Titaniac” this is a great read  and if you are not it’s a greater read as it is a great story!

I found this book to be easily read. It’s straightforward yet weaves a story that is illuminating, chilling and warming. I think it would be a great travel book as you do not have to read it in one sitting.  (You can if you want too!)  Rather it’s a “comeback” to type book after the frequent changes that travel might tender.