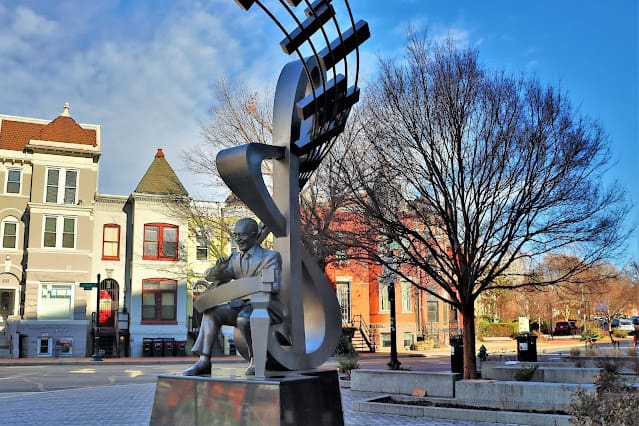 By Dave Zuchowski with photos by Bill Rockwell

As the song written by Duke Ellington says “It Don’t Mean a Thing If It Ain’t Got That Swing.“

Ellington, Washington DC’s preeminent jazz native son made heavy contributions to jazz history and culture which began even before him in the early 1900s in and around DC’s U Street area. U Street was a hot spot for America’s original music, playing a large role in the jazz scene of the Eastern United States.

While our nation’s capital isn’t as well known for its jazz and jazz history as much as New Orleans, Chicago, or New York, it does have a lively contemporary jazz scene and impressive jazz heritage. This is something I discovered during a recent visit over New Year’s weekend when I learned that Washington is the birthplace of jazz luminaries like Duke Ellington, Charlie Rouse, Billy Hart, and Davey Yarborough. Additionally, Dr. Billy Taylor, Pearl Bailey, Jelly Roll Morton, and Billy Eckstine spent a considerable portion of their lives and careers in DC.

The next time you find yourself in the nation’s capital, you might want to explore DC’s jazz assets and end your day by kicking back, favorite beverage in hand, at some of the following jazz venues.

Holding a maximum of around 150 patrons who sit around supper club-style tables and chairs, the venue is small and intimate, and seating is first come, first served. Management, however, will try to accommodate those who phone in advance with seating requests. Besides the cost of a regular ticket, a $15 minimum for food and beverages is also assessed each patron.

The club operates 360 days a year and, in the past, named some of its menu items after jazz performers like the Tony Bennett’s Shrimp and Artichoke Heart entrée. While the current menu doesn’t have this interesting embellishment, it’s something production manager, Norelco Carroll, plans to reintroduce soon.

At 620 T St. NW, the historic Howard Theatre was built in 1910, then added to the National Register of Historic Places in 1974. It’s hard to believe this Franklin D. Roosevelt favorite, which hosted jazz greats of both the past and present, was shuttered for more than three decades before reopening in 2012.

The Howard, once again beginning a new chapter in its long and prestigious history, boasts a brand-new stage as well as a dazzling interior that pays homage to its history. Today, you’ll find hip crowds on hand to experience an eclectic array of performers, from jam bands and R&B crooners to blues and pop performers.  Phone 202-803-2899 or www.thehowardtheatre.com.

Since its opening in September 1971, the Kennedy Center has been a mecca for all cultural genres including live theater, classical music, dance, opera, jazz and more. Jazz at the Kennedy Center in the 2022–2023 season, the 12th presented under Artistic Director for Jazz Jason Moran, explores the improvisational excellence of the art form with jazz greats and rising stars alike. Between February and June, the Kennedy will present 11 jazz events.

Returning this year, The Club at Studio K has quickly become one of D.C.’s hottest jazz destinations to witness artists at the top of their craft in an intimate setting.

Prior to the concert, I had dinner in the Roof Terrace Restaurant, located on the same level and near the Terrace Theater. From its menu of “classical dishes that showcase global flavors,” I chose a Yellowfin Tuna Tartar as my opener, followed by Australian Lamb Chops with Béarnaise.

With enough time left before the concert, I strolled the outdoor Rooftop Patio, which runs along the Center’s perimeter in all four directions, giving visitors some of the best views of the DC area. For a schedule of 2023 jazz events at the Kennedy Center, go to kennedy-center.org/digital stage/jazz or phone 202-467-4600.

Those interested in hearing live jazz at dinner or Sunday brunch, can get their fill of both at Georgia Brown’s, which specializes in Low Country cuisine. Think items like Fried Green Tomatoes, Carolina Gumbo, Fried Chicken and Shrimp and Grits. Located at 959 15th St. NW, the restaurant features jazz on Wednesday evenings from 7 to 10 p.m. and on Sunday Brunch starting at 10 a.m. Phone 202-393-4499 or www.gbrowns.com.

For decades, the nation’s capital was the embodiment of a thriving jazz culture, and the DC Jazz Festival celebrates the city’s homegrown musical past, present and future. In the 1930s, U Street was the epicenter of Washington’s jazz scene, lovingly known as “Black Broadway.” Voices of U Street tours can be arranged at www.blackbroadwaywashingtondc.com.

The DC Jazz Festival, which runs over the Labor Day weekend this year, brings together heritage, history, culture and music with over 150 performances in 40-plus music venues across the District. The marquee event, DC JazzFest at The Wharf (Sept. 3-4), offers a distinctly urban experience at the always-bustling Wharf and offers the ideal setting for a fully immersive festival experience. Attendance is free. For more information, go to dcjazzfest.org.

For a Place to Stay, the Hotel Harrington is located half a block from Pennsylvania Avenue between the White House and Capitol and within walking distance to many attractions. To make things even more convenient, the Metro is two blocks away. Phone (800) 424-8532 for reservations. or hotelharrington.com.

For a Place to Dine, P.J. Clarke’s, located a stone’s throw away from the White House at 1600 K St. NW, Loaded with period charm, mosaic floors, red banquettes and photos of a bygone era, the restaurant features a raw seafood bar, but is also famous for its burgers. Check out the glass structure behind the hostess station. It once served as the entrance to Walt Disney’s solarium,

For something over the top for most DC visitors, try the Drag Brunch at Nellie’s Sports Bar, 900 U St. NW. Walk through the door and the first thing you’ll see is a expansive buffet table and, even before you’re escorted to your seat by one of the drag queen performers, you’ll be handed a complimentary mimosa.

After everyone makes their round at the buffet, the high energy show begins with the lip-synching show “girls” prancing through the crowd up close and personal.

Nellie’s is located in the former Addison Scurlock Photography Studio. Scurlock was a portraitist who chronicled the lives of the DC African American elite and working folk during the glory days of the U Street corridor. (Look for some of his photos on the walls). Phone 202-332-6355 or www.nelliessportsbar.com.