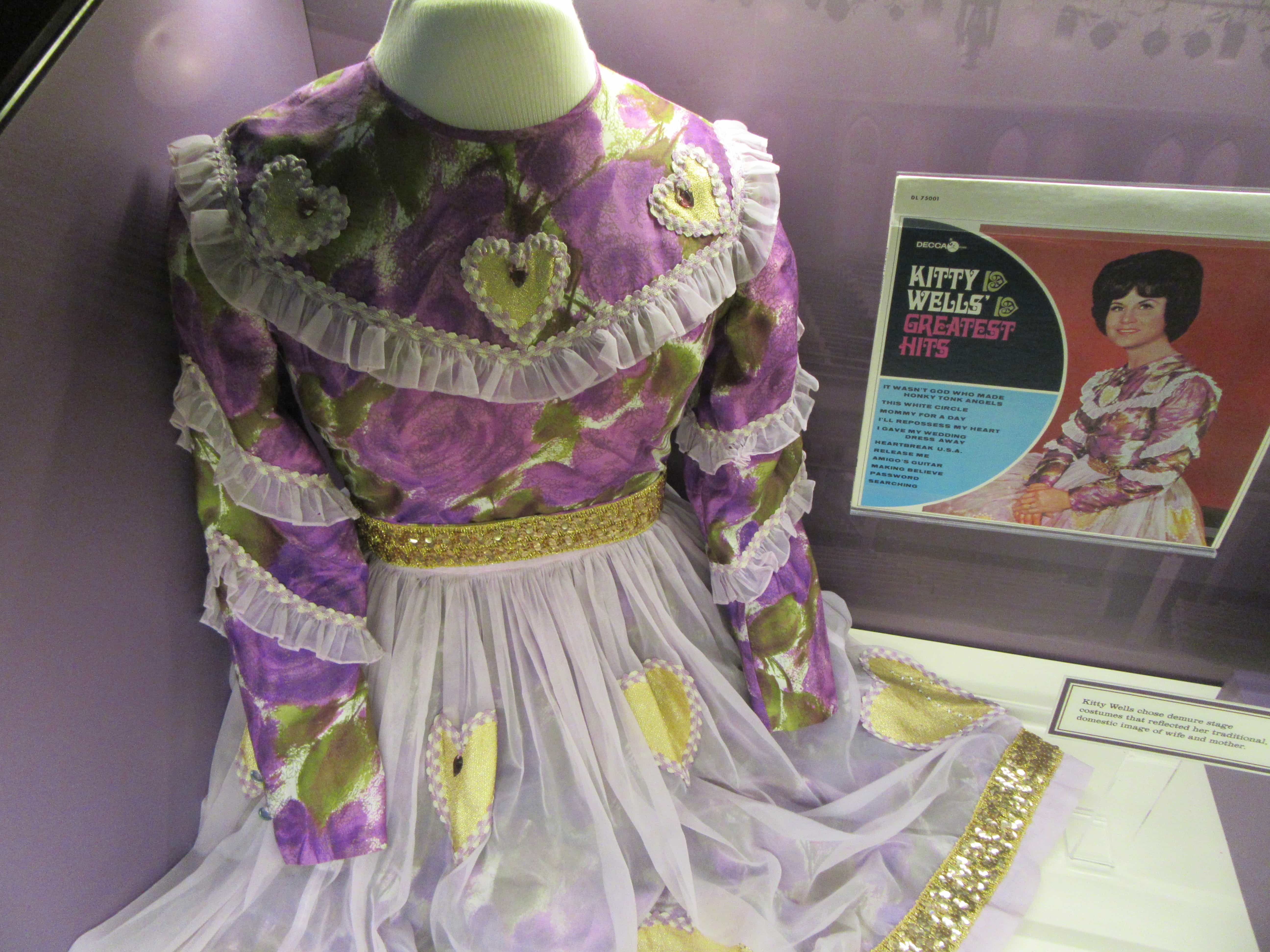 THE KICK OFF OF YEAR-LONG 125th ANNIVERSARY CELEBRATION
Posted by Mary Gallagher, editor  Will A. Davis, photographer
-On Sunday, March 26, Tennessee residents are invited to celebrate the Ryman Auditorium’s 125th anniversary with a daytime tour experience free of charge. Complimentary self-guided tours will be available from 9:00 a.m. – 4:00 p.m. with presentation of a valid Tennessee state ID at the Ryman box office. No reservations are necessary. 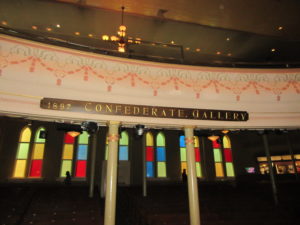 Great balcony seats at the Ryman.
We made our first visit to Nashville just a few weeks ago and loved it! It’s easy to see why travelers are flocking to this great city in the middle of a population and entertainment explosion. Construction cranes are everywhere downtown, parking is impossible and out at the Gaylord properties and the Grand Ole Opry things are also expanding rapidly with a new water park soon to appear. 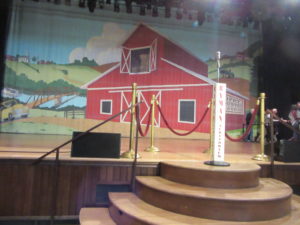 In Nashville at the Ryman stage with its famous microphone stand.
We took the Ryman’s self-guided tour and fell far short of reading every sentence of explanations on so many objects. The free tours will jinclude admission to the state-of-the-art theater experience, “Soul of Nashville.” The show puts the audience at the center of the Ryman’s fascinating history, from its origination as a tabernacle built by a riverboat captain 125 years ago to becoming Nashville’s largest venue for civic gatherings and ultimately evolving into one of the world’s premier concert halls.  The multi-dimensional film brings to life historic performances by artists such as Johnny Cash, Patsy Cline and Hank Williams, Sr. and culminates with a new collaboration featuring Darius Rucker, The Fisk Jubilee Singers, Sheryl Crow and Vince Gill.  “Soul of Nashville” envelopes visitors into the Ryman’s story, which they can further experience through five new exhibits honoring the hallowed venue’s 125th anniversary: “Workin’ on a Building,” “Showplace of the South,” “Mother Church of Country Music,” “125 Years of Inspired Performances” and “Ryman Renaissance.” Guests will see genuine artifacts and enjoy videos with hosts Emmylou Harris, Marty Stuart, Nicole Kidman, Ricky Skaggs, Robin Roberts and Trisha Yearwood taking them through each chapter of the Ryman’s illustrious history.
Community Day Specials
While at the Ryman, guests are encouraged to enjoy Community Day specials at Cafe Lula and the Ryman Gift Shop. Cafe Lula, open 9:00 a.m. to 5:00 p.m. will offer a “buy one, get one for $1.25” special on all entrees. The Ryman Gift Shop will offer 20 percent off on merchandise including the Little Big Town at the Mother Church product lines and every purchase will include a free Ryman tote bag.  The Ryman gift shop is open daily until 7:00 p.m.  (Discount offer excludes media items.) 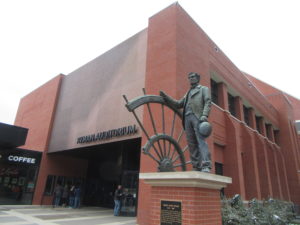 In addition to sponsoring the complimentary tours for Tennessee residents, Nissan and SunTrust Bank will partner with 650 WSM-AM to provide free live music on the Ryman plaza outside Cafe Lula, where visitors will also have the opportunity to view several Nissan cars on display, including a GT-R similar to the one featured in the smash hit movie franchise, The Fast and the Furious.

Newest exhibit
In celebration of the building’s monumental 125th anniversary, the newest exhibit, “Inspired: 125 Years of Performance” unveils historical artifacts that illustrate how the Ryman’s construction was born out of divine inspiration. Emmylou Harris is featured as a video host, detailing the building’s origins and sharing stories of the influence the Ryman had on suffrage, civil rights movements and even fashion trends in country music. 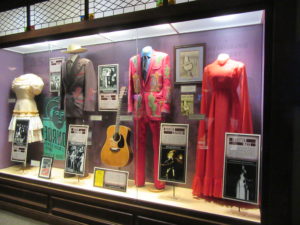 The exhibit showcases stage attire from Johnny Cash, Jimmy Dickens and Little Big Town; famous guitars played by Jack White and Vince Gill; long-time Ryman manager Lula Naff’s collection of playbills.  One of the highlights of the exhibit include the bible used on May 10, 1885 by Rev. Sam Jones.  It was a tent revival on that date where Ryman namesake Captain Tom Ryman first became inspired to build the Union Gospel Tabernacle.  The name of the majestic tabernacle was changed to Ryman Auditorium in 1904 and Captain Ryman’s funeral. 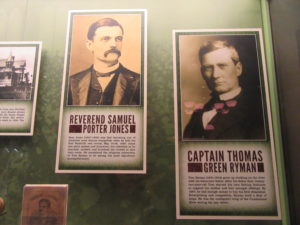 In keeping with its inherent “all are welcome” spirit and celebration of community, the Ryman Auditorium will continue its 125th celebration with special events and performances throughout the year, including the recently-launched, year-long residency of five-time CMA Vocal Group of the Year Little Big Town and newly announced five-night run by GRAMMY Award-winning artist Jason Isbell and The 400 Unit from October 10 – 11 and 13-15.

Tickets for Isbell’s shows will go on sale Friday, March 17 at 10 a.m. Tickets are $99.50, $49.50 and $39.50.  For the most devout Isbell followers, multi-night packages will be available for sale. Packages include: two-night, three-night and five-night bundles that guarantee ticket holders the same seat. 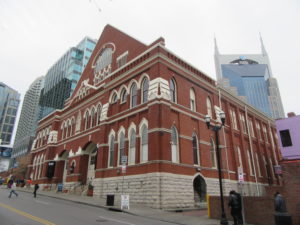 The Ryman auditorium is a Nashville historic landmark.

About Ryman Auditorium
A National Historic Landmark, Ryman Auditorium was built as a tabernacle by Captain Thomas G. Ryman in 1892, served as the home of the Grand Ole Opry from 1943-74, and was completely renovated in 1994. The Ryman is open for tours during the day and at night offers a wide variety of entertainment performances, just has it has for over 125 years. The venue was voted the 2010, 2011, 2012, 2013, 2014, 2015 and 2016 Pollstar Theatre of the Year and recently took home its fifth-consecutive CMA Venue of the Year Award. Ryman Auditorium is owned by Ryman Hospitality Properties, Inc. (NYSE: RHP), a Nashville-based REIT that also owns and operates the Grand Ole Opry, and 650 AM WSM. For more information, visit ryman.com.

About “Soul of Nashville”
“Soul of Nashville” utilizes cutting edge technology to surround the audience with moving images on multiple projector planes and sound that engulfs the senses and puts them in the center of the show. Through special effects, archival images and footage, performers from the Ryman’s past become multidimensional right before the viewer’s eyes.

The show culminates in a finale that delivers a montage of photos, posters and video footage from the Ryman’s contemporary history since reopening over 20 years ago. Seamlessly, the energy captured in those performances transitions into a new arrangement of the traditional song, “Workin’ on a Building,” featuring a magnificent performance by the acclaimed Fisk Jubilee singers, who have a history with the Ryman dating back to 1892, and soloists Darius Rucker, Sheryl Crow and Vince Gill. The choir and stars appear larger-than-life on the screens as if performing a concert right in the room. By design, this experience makes an emotional connection with the audience who will then exit the theater and begin the rest of their tour experience. 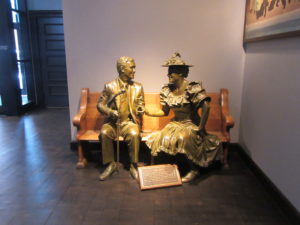 New Exhibits
“Workin’ on a Building”
Video host Trisha Yearwood tells of the famed meeting between Thomas Green Ryman and Samuel Porter Jones, and the inspiration that led to the construction of one of the nation’s grandest tabernacles. On display are artifacts documenting Ryman’s life, construction of the building and events that took place during the early years of the Union Gospel Tabernacle.

“Showplace of the South”
Most know of the Grand Ole Opry’s time in the Ryman, but some may not be aware of the performances that graced the stage long before the radio show arrived. Video host Nicole Kidman shares the fascinating story of the Ryman’s transition from a revival hall into a premier performing arts venue. At the forefront was longtime manager Lula C. Naff.

“Mother Church of Country Music”
The Ryman acquired a new identity when a soon-to-be world-famous radio program found itself in search of a new home. The Ryman’s new tenant brought a whole new fan base into the pews when they began broadcasting their clear-channel signal coast to coast from the stage of the old “Mother Church.” Hear firsthand accounts from Opry members Marty Stuart and Ricky Skaggs as they host the exhibit video, enjoy rare performance footage and see stage costumes and instruments on display.

“Inspired: 125 Years of Performance”
“Inspiration is a powerful force. It builds buildings. It built this one.” – Emmylou Harris
A tabernacle, an Opry House, and an icon. From Nashville locals to the millions travelling from near and far, Ryman Auditorium holds several titles for its patrons. The Mother Church has served as both performance venue and town hall; a place where souls came to be lifted and citizens came to discuss the prevailing issues of the day. 125 years later, the Ryman continues to inspire as a beacon for patrons and performers alike.

“Ryman Renaissance”
The last stop on the tour is an exhibit dedicated to the ongoing legacy of the Ryman. Video host Robin Roberts shares recent Ryman history and relates the importance of its continued tradition. Today, the Ryman hosts 200-250 events annually, and, just like the generations of the past, people sit in the same wooden pews to see the greats of their day perform and breathe new life into the room.
More information.
ryman.com/
visitmusiccity.com/
GaylordOpryland.com
Editor’s note on parking in Nashville. Be aware handicap placards and plates are only valid in specifically marked handicapped parking spots. You will get a ticket, as I did, if you think your placard allows you unlimited parking at a meter. In 4 days of visiting downtown Nashville I never saw one handicapped parking spot. Surface lots and parking ramps were charging $20- $26 for two hours of parking. Meters were strictly enforced. Park six to eight blocks away from the center of downtown for  a slightly better rate.  Nashville is also quite hilly for those with mobility issues.