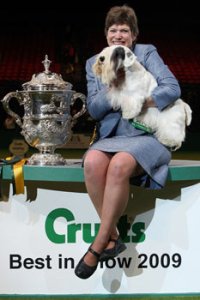 Fergus has some big shoes to fill.  That is, if he wore shoes.

Fergus is a son of Charmin, the Chester County Sealyham Terrier that snatched Great Britain’s and the dog world’s most prestigious prize– “Best in Show” at the 2009 Crufts Dog Show.  More than 22,000 canines competed.

Sporting a dazzling snow-white coat, a bearded face and a fall of tousled hair between his eyes, Charmin sailed around the show ring like a supermodel.

“We were the first ones to be judged in the finals so we entered the ring under a spotlight which only happens a couple times in a lifetime of showing,” recalls Cochranville owner/handler Margery Good.

“Charmin responded with almost a professional march, neck held high.  The crowd went crazy, clapping and cheering.  He usually enters the ring with a lot more speed.  So, it’s like he read my mind and my body language.  He knew it was a very prestigious event and that is when he stepped up and performed his best.  He was spectacular. He was in a league by himself.”

These days Charmin is busy producing 15 or so sons and daughters each year. His progeny have won competitions in Canada, England, South Africa, Australia and Russia.  Four-year old Fergus was bred by Marie Boisvert, a Chester County horsewoman.

“Fergus is a little less assured than his daddy,” Good observes. “He enjoys showing off, looking good. But he doesn’t have the competitive fire of Charmin, few do. Fergus just wants to be loved.”

Good will pilot Fergus into the show ring at the National Dog Show at the Greater Philadelphia Expo Center in Oaks, Pa.

Saturday, Nov. 17, marks the 10th anniversary of The National Dog Show, Presented by Purina. More than 2,000 of America’s top show dogs and 170 different breeds (including the world’s largest, smallest and most exotic) will take to the show rings in a pair of all-breed, benched dog shows at one of the nation’s largest and most prestigious dog shows.  The competition (1-6 p.m.) will then be produced into a two-hour special to be aired on NBC Thanksgiving Day, Nov. 22, (noon – 2 p. m.) after the Macy’s Thanksgiving Day Parade. 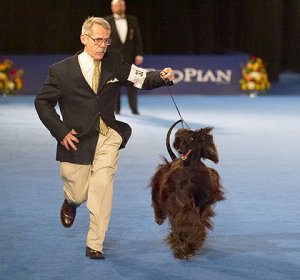 On Sunday, Nov. 18, the Kennel Club presents another competition with 150-plus breeds competing for Best in Show, and a wide variety of demonstration events such as agility trials, dog diving, entertainment and educational programs.

The National Dog Show has become as much a fixture on Thanksgiving as pumpkin pie and NFL games. When the event was first televised in 2002, executives had to rub their eyes to be sure they were seeing the rating numbers straight.  It’s the world’s most widely watched dog show (over twice the combined audiences of the next two most widely watched dog shows) and the special is expected to reach an audience approaching a total of 20 million viewers.

Staged in Oaks, Pa., near Valley Forge, Saturday the canine contenders will be judged individually in a dozen rings according to the recognized standards for the breed.  Around 2 p.m. breed winners advance to group judging in the main show ring– Sporting, Hound, Working, Terrier, Toy, Non-Sporting and Herding. The group winners vie for the coveted title—“Best in Show.”

Philadelphia is one of only five benched dog shows left in America, meaning the dogs are on display throughout the show and large crowds come out to meet the canines and interact with the owners and breeders. NBC takes viewers backstage capturing that lively atmosphere which celebrates the species, introduces the newest breeds and makes every canine the star of the day.

John O’Hurley will again host the NBC television special.  A winner in “Dancing with The Stars” and a veteran actor, O’Hurley is joined again by David Frei, “the dean” of canine expert commentators. 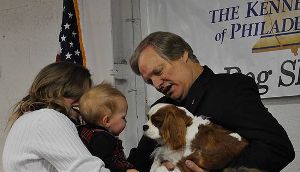 Frei is an AKC-licensed judge and host of USA Network’s prestigious Westminster Kennel Club Dog Show. He has enjoyed much competitive success with his Afghan hounds and Brittanys.

So why is one canine chosen over others in what seems a whisker-close competition?

“Judging outside the ring, we can all do that,” Frei replies. “It’s relating form to function.  The job of an Afghan hound is to run down rabbits, so the judge needs to see those traits.  All the right parts need to be in all the right places.  It’s all about putting your hands on the dog and feeling what’s under that fur which helps to bring both the art and engineering together to find that star.”

Any American Kennel Club registered dog can enter to compete. A full registration with the AKC allows a show dog to participate in many of the 20,000 events offered by the AKC and its affiliated clubs each year, though many events are breed-specific.

This year the National Dog Show introduces two new breeds– the Russell Terrier, a strong, hardy, intelligent earth-working terrier and the Treeing Walker Coonhound that is perfectly suited for the task for which it was bred – tracking and treeing wild raccoons.

Attending a benched show is a rare pleasure. Spectators can go backstage to watch a myriad of breeds get pampered, coddled and primped for the show ring.  Some dogs simply sleep in their crates between showings. Most surprisingly, there is very little barking considering how many dogs are in one exhibit hall.  But best of all, visitors looking to acquire a certain breed can quiz devoted dog handlers about a breed’s energy level, intelligence, or potential health problems. 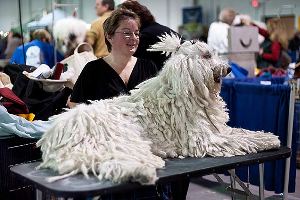 Steve Griffith, a resident of Exton, Pa., is the Director of Communications for both the Oaks show and the Westminster Dog Show in New York City.

“When a friend of mine first called me about working on it, he prefaced the discussion by saying ‘Now, don’t laugh,’ because it was a dog show and I had worked on Super Bowls, World Series, and primetime television,” Griffith relates.

“Now, I’m completely captivated.  Here’s the thing.  With dogs, it’s not what we can teach them, it’s what we can learn from them.  Think about it.  It’s all about loyalty, honesty, commitment, integrity, devotion and unconditional love.”

Haverford, Pa. resident Debra Evalds has been showing Vizslas for 20 years. Lightly built with an attractive golden rust coat, Vizslas are agile and energetic, a versatile dog of power, drive and endurance in the field. This year Evalds brings seven-year old Scarlett to the National Dog Show.

“She has been runner-up four times (Best in Breed) at this show, so maybe her turn is this year,” says Evalds, a special education teacher who runs the New Hope Vizsla Rescue.

“The Oaks facility is so user friendly.  I think it’s the best dog show facility in the country. Folks get a wonderful meet and greet. When a family is thinking about a breed they need to meet that dog in person, especially if they have kids. Vizslas are a super high-energy dog. See how the dog fits in the home as a companion. As breeders we have that obligation. It’s our number one job.”

The dogs may be the stars, but it’s their handlers that make it happen.  It’s tough work, with long hours and loads of travel.  Handlers work with their dogs every day to keep them sharp physically and mentally.  They are grooming gurus, constantly perfecting their gleaming coats. 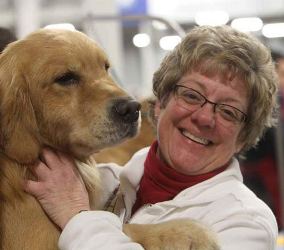 Most weekends they’re out there traveling with their companions in cages and crates.  Handlers drive hundreds of miles and then spend several hours sitting backstage before the animal goes on for its 60 seconds or so of fame.

For a top-notch handler the job is a 24/7 routine. Hours of practice teach the dogs to trot perfectly on a lead– chin up, fluid movement and focused intent.  Margery Good chose to work with terriers because she loves their spirit, their individuality and the willingness to work with her.

In the show ring Good matches her strides to the trot of her spunky terriers.   She cajoles them with body language, treats and funny voices.  It’s all aimed at drawing out the dog’s personality, and winning over a sharp-eyed judge in a two-minute showdown.

“It’s a matter of timing, the dog needs to respond when the judge is looking,” Good explains.  “Treats work but I use my chirping sounds to get the dog to cock its head, prick its ears or show off an expression.  If I can get the judge to smile, he’s on our side.”