My seven-day journey began in charming Leon, dubbed “City of the Revolution.” Nowadays, the only vestiges of the once war-torn, politically challenged nation and town are graphic murals and memorabilia exhibited in the Revolutionary Museum. Old timers linger outside the building to reminisce about the Sandinistas and Somozas. 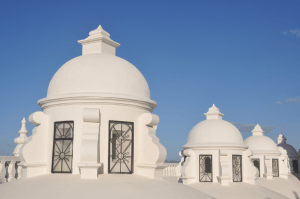 Deemed the largest in Central America, the 400-year-old, “Basilica Cathedral de la Asuncion”, harbors the tomb of Ruben Dario, Nicaragua’s greatest poet. Ascending the temple stairs to the roof rewards the wayfarer not only with a vast panorama of verdant countryside, produce vendors, and children pedaling bicycles. A glorious UNESCO world of snow white domed structures resembles a Narnia-like fairyland. 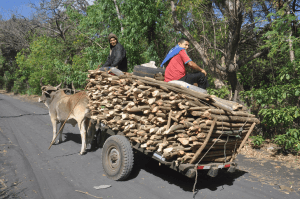 Boys driving a wood-laden oxcart on a country road to Cerro Negro volcano.

One of my favorite experiences was Cerro Negro, considered the youngest volcano in Central America. Traveling by car over a long, windy dirt road was a mini-adventure. Families and ranchers paused, allowing me to photograph droves of cattle, horse carts with unbalanced water tanks, and wood-laden carts powered by oxen. Fields of cassava, sugar cane, corn, and peanuts cropped up much of the way. Crude huts devoid of electricity, plumbing, and wooden floors are the norm. Seemingly unaware or oblivious to their lack of luxury, satellite TV, and other amenities the modern world takes for granted, people smiled and waved. 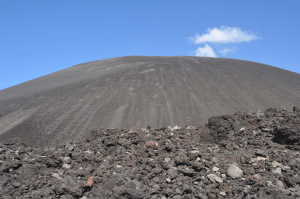 Cerro Negro volcano, one of the world’s youngest.

At Cerro Negro, some hikers haul a “volcano board” to the pinnacle. Suiting up and donning protective eye gear, many revel in the wild ride over dark volcanic ash to the bottom. Treading gingerly over chunks of loose rocks to glimpse the “Maribios volcanic chain” with the active cones of San Cristobal and Telica is also exhilarating.

My learned guide Aura and I rode to the little village of Las Peñitas. In an open café overlooking a pristine, rocky beach, we shared a tasty lunch of fresh fish, fried plantains, and rice. Children peddled baskets brimming with their hand-crafted seashell creations. One little girl presented me with a three-footed sea turtle, which I still treasure.

In Nicaragua’s oldest city of Granada, we boarded a horse-drawn carriage. Weaving past scooters along narrow streets, we passed an old railroad station, buzzing outdoor markets, and stately colonial buildings. Tempting aromas of tacos, tortillas, and other traditional dishes wafted from stands at the central park. Salesmen pedaled bicycles, carts attached with plantains. We paused to climb 70 steps of Mercy Church to view the busy city. Elegant, multi-hued colonial structures, including the gold Cathedral of Granada graced the plaza. 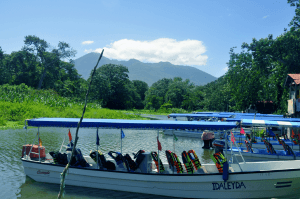 A relaxing canopied boat excursion over surrounding Lake Nicaragua led to a shady grove. Spider monkeys with babies in tow scurried on limbs to observe us. Tucked away in secret inlets were opulent homes and properties adorned in lush tropical blooms. There are 365 islands in this grand lake.

A cloud of vapor with a slight gaseous odor erupted at nearby Masaya Volcano National Park. Aura and I hiked to the apex to gaze down at calderas and craters. Peaceful Lake Catarina is the focal point of the quaint neighboring village of Masaya. This is the place to purchase lovely clay bowls, scarves, and other locally created bargain souvenirs.

Embracing the Pacific coast is the once lazy fishing village of San Juan del Sur. In recent years, this area has become a young person’s tourist town with choice restaurants, guest homes, and an array of shops. People swim, sunbathe, and play volleyball on an elongated stretch of beach.

High on a hill over this horseshoe cove of yachts and shoreline, is Christ of Mercy. One can walk a round-trip of about 6.5 miles or take a taxi to the site. A nominal fee to climb scramble to the top affords superior sunset views.

From the town of San Jorge, my guide and I rode a ferry for 1.5-hours to Ometepe Island. Midway the journey, twin cone-shaped peaks of Maderas and Conception Volcanos appeared, rising majestically above Lake Nicaragua. 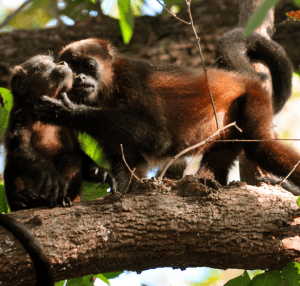 Our first island stop was Ceibo Museum, an education about the first inhabitants of the island. Nature trails at Charco Verde lagoon wove by lush vegetation and many birds. Suddenly, we heard the unmistakable guttural sound of howler monkeys. Somewhat accustomed to humans, several troops allowed us to step reasonably close. A dip in the sequestered Ojo de Agua is said to be a fountain of youth. Rejuvenation maybe.

We stayed at a working plantain hacienda, an antidote for ultimate privacy. Simple, delicious meals were cooked over fire pits and served at our cabanas. A horseback ride was the quintessential way to experience this immense farm and its beach and bid Nicaragua farewell for now.

For the best time ever in Nicaragua, contact Oro Travel at www.orotravel.com