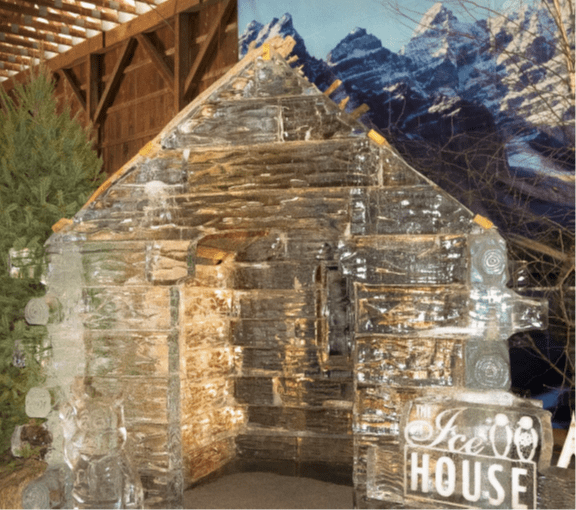 If you are from Pennsylvania or most anywhere else in these days of 24 hour newscasts you’ve probably heard of Punxsutawney Phil, our Keystone State’s furry expert weather prognosticator. Meteorologist, Phil, makes an early morning appearance each year up on Gobbler’s Knob outside Punxsutawney, on February two, to predict either an early spring or six more weeks of winter. His forecast, of course, depends on whether or not he sees his shadow. No shadow predicts an early spring. This year he saw his shadow. 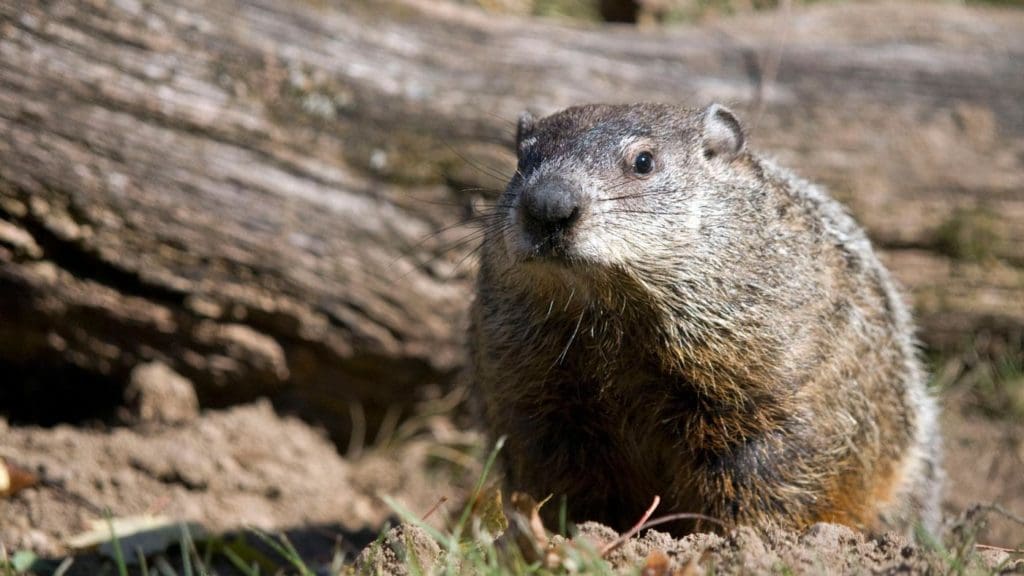 Pennsylvania’s Punxsutawney Phil “I saw my shadow on Feb 2”.

Starting about the same time Phil starts looking for his shadow in northcentral Pennsylvania, an event starts up in northeastern section of the state in Lakeville, Wayne County. Coinciding with Phil’s time in the sun or shade annually on February two, the Crystal Ice Cabin Fever begins its month long exhibits and demonstrations. 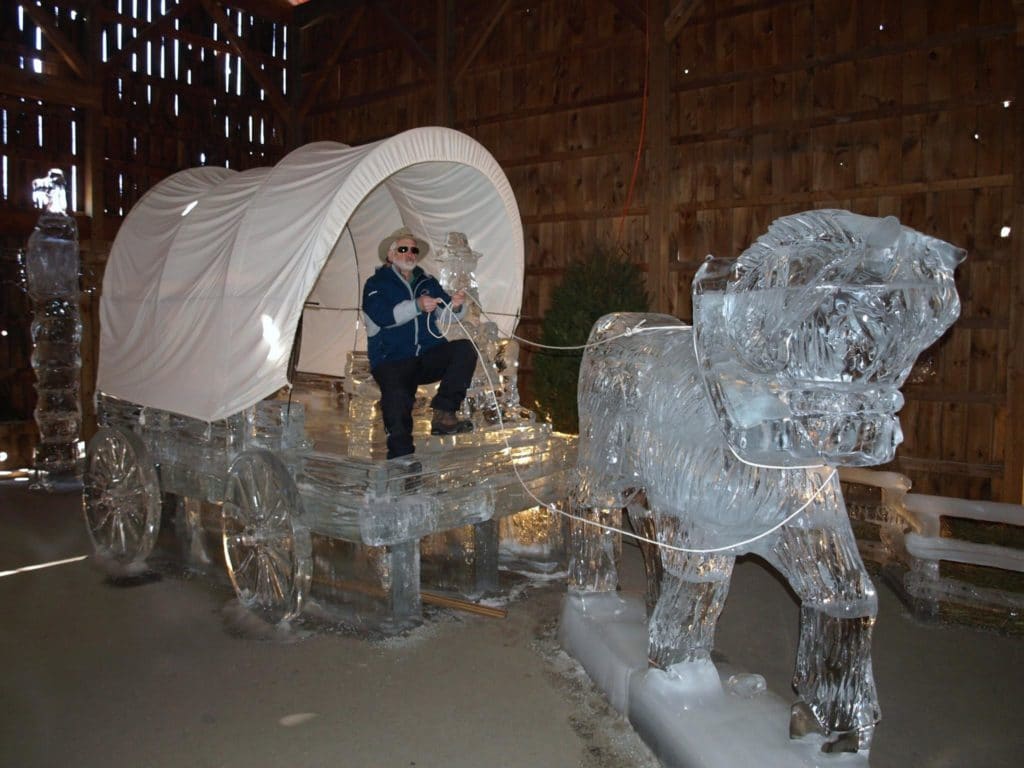 The ice sculpture displays in the big barn are only open to the public during February. There is a fee. It’s too late to go this year, so be sure to mark it on your calendar for 2018 (throughout the month of February). Wear very warm clothing. Remember you’re viewing ice sculptures in a large barn without heat. The Crystal Cabin sculptures begin melting when the temperature rises above 32 degrees Fahrenheit. 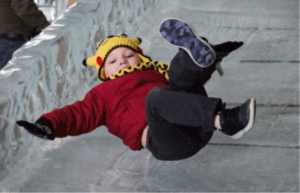 The giant barn housing two children’s ice slides and the many theme related ice sculptures was previously the warehouse for a lumber company.  The Crouthamel family bought the lumber yard property and founded the ice manufacturing company in1991. They produce blocked ice, crushed ice and ice sculptures year round as well as those fo the Crystal Cabin.

“Once Upon a Time” Theme for 2017 at the Northeastern Pennsylvania’s Crystal Cabin Fever.

This year’s theme was  “Once Upon a Time.”  We entered the barn and were greeted by the seven dwarf sculptures scattered along the ice-walled hallway leading to Jack’s bean stalk. Captain Hook and his pirate ship is located across from the small children’s ice slide.

As we walked into the central part of the barn, the big ice slide was on our left and the Antler Ridge’s wine tasting cabin on our right.  Chelsea was on hand to take us on a wine tasting journey. Chelsea or another one of Antler Ridge’s cordial staff will answer all your wine questions while you taste their varieties. 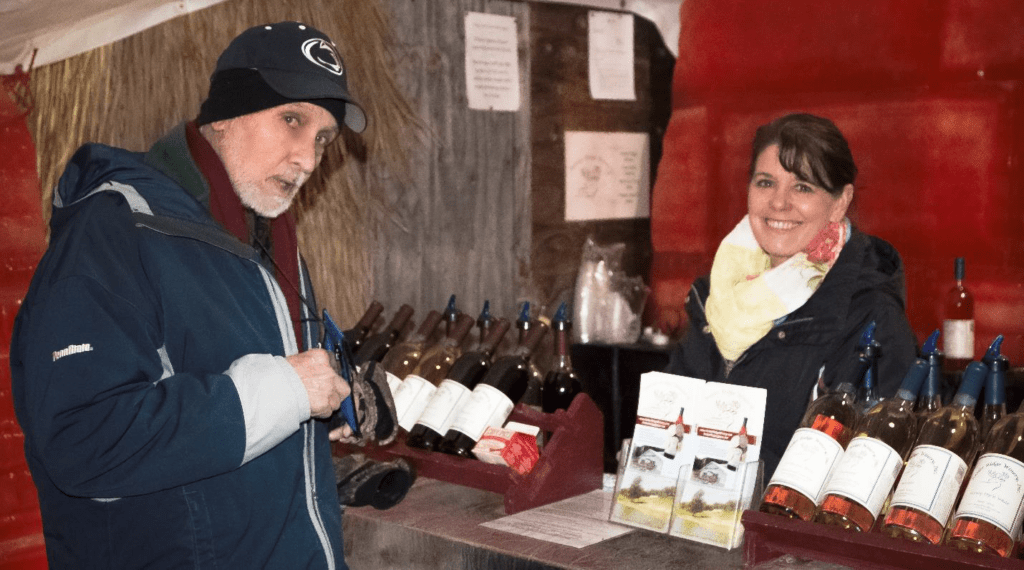 Chelsea of Antler Ridge will take care of wine sampling.

The color of the wine tasting Crystal Cabin ice walls was produced by spraying a mixture of milk and Gatorade on them.

According to Kristen Johnson, events coordinator, there is a big demand for ice sculptures for weddings, festivals and special events held at area Pocono resorts and across the northeastern United States.

“We also rent the barn for weddings and provide the sculptures from our ice sculpting room,” explained Johnson. “This is the eleventh annual February exhibit of ice sculptures located here in our barn. We also have a museum with a locally produced black and white video showing how workers cut and moved natural forming lake ice from Pocono Lake to nearby insulated railroad boxcars in the 1920s and 1930s.  Much of the ice that was once shipped to New York City, Philadelphia and other northeastern U.S. metropolitan areas came from this region.” 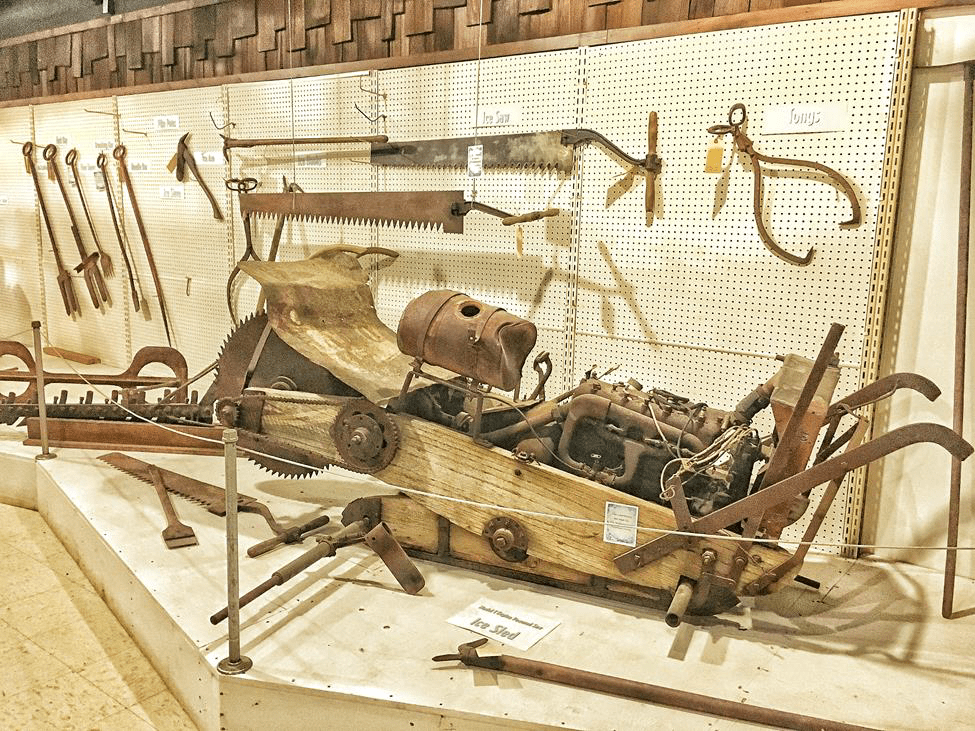 Stop at the museum adjacent to the Crystal Cabin first to purchase tickets. The museum, a gift shop and an ice carvers’ room are in a different building from the barn. The museum includes many of the tools needed for cutting ice to ready it for market sales.

Be sure to watch the short black and white museum video that follows the ice from lake, to railroad to the big cities for distribution around the country.

Ice workers plying their trade on the frozen Pocono lakes made thirty cents an hour and often worked from sunup to sundown. Some worked all night making sure the floating blocks cut during the day did not freeze together again during the frigid winter nights. Can you imagine how cold that must have been? And they did not have the warm wicking clothing that modern technology has developed. Brrrrrrrrrrrr!

When you go to the Crystal Cabin Fever take a step back in time and drive to Hawley (about five miles east) either before or after your Ice Cabin visit. Other than the modern vehicles parked and traveling down the main drag you will think you have stepped into a time machine and gone back about seventy or eighty years. It reminds me of the old mining towns I’ve visited out west. 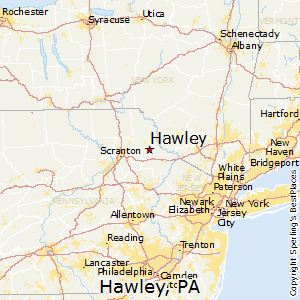 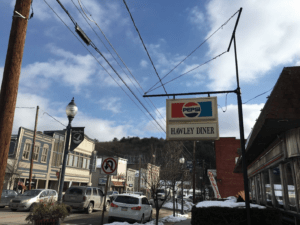 Be sure to stop in the Hawley Diner where the highest dinner entre’ tops off at $11.95. They also have an all you can eat salad and hot bar available for lunch and dinner. The food, like with many small downtown diners, is very good, but you have to remember it is diner food. How can you beat an “all you can eat” hot bar with salad for $8.95?

Hope to see you there in February, 2018. Mark your calendars!

The Pocono area has many other winter events taking place throughout the region. 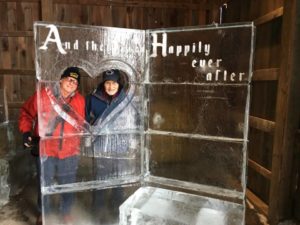 Steve Bandura, photographer, rech him at “Through My Eyes Photography.”
Some sculptures are from previous years:

Editors note: I was lucky enough to visit the Ice House a few years ago and it is quite extraordinary and a delight for all ages.