Home » Blog » One Day in Pompeii

One Day in Pompeii 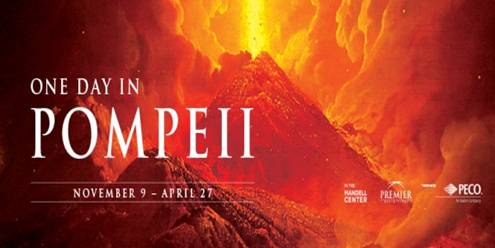 Daybreak, August 25, A.D. 79. Pompeii is a thriving commercial center with a population of 20,000 people a few miles from the Bay of Naples. Its narrow streets, made narrower by vendors and shops, teem with market goers, slaves, and vacationers.

At 8 a.m. the ground begins to rumble. At noon Mount Vesuvius literally blows its top, spewing tons of molten ash, pumice and scorching gases twelve miles into the atmosphere. Midday turns into midnight as the city of Pompeii– just five miles from the volcano– is blanketed with six inches of ash and pumice within the first hour. Around midnight, the column from the volcano collapses and the mountainside is a glowing avalanche of boiling gases, pumice and rocks. About 6:00 a.m. on the following morning, the rolling firestorm envelops Pompeii.

Mighty Mount Vesuvius’ 24-hour reign of terror killed all those trapped between the volcano and the sea.  The eruption buried everything in its path, sealing the town as if a layer of concrete had been poured over it. But the remains of Pompeii were also preserved in time.

The hellish demise of this vibrant Roman city is detailed in the exhibition, “One Day in Pompeii” in its world premiere at the Franklin Institute in Philadelphia on view through April 24. More than 150 artifacts from Pompeii give insights to life lived in the shadow of Europe’s largest volcano. The archeological treasures that rarely leave Italy will be on view in the Mandell Center before being presented at science centers in Los Angeles and Seattle. 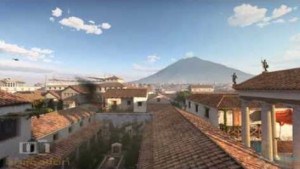 Pompeii before the eruption of Vesuvius

“It’s one of those moments in history that’s entirely unique,” said Alexandra Klingelhofer, vice president of collections for Premier Exhibitions, a leading presenter of museum quality touring exhibitions. “An entire city has been buried and its population captured in a moment in time. . . . It allows us to recreate the time, the people and their lives. You can time travel back to the height of the Roman Empire and discover the lost city of Pompeii, a unique window into a culture.”

The destruction of Pompeii and the nearby coastal town of Herculaneum is undoubtedly history’s most storied natural disaster. Buried under layers of volcanic rock and ash, the ancient Roman cities were rediscovered in the 18th century.

“One Day in Pompeii” is designed as an immersive experience with an organic journey through the ancient Roman city. Before entering via large wooden doors visitors are greeted with a brief introductory video on the history of ancient Rome and the city of Pompeii.  Transported back in time to 79 A.D., you first tour various rooms of a typical upper-class villa and then emerge into the city’s public spaces. Displays illuminate the layout of the marketplace, the public baths, and the House of Gladiators. Look for Roman-style arches and other installation details intended to recreate historic elements.

Through the use of projections, audio, video, photographic murals, and graphic reproductions of frescoes and mosaics, visitors will experience different locations that existed in the city, including the market, the temple, theater, and baths. Artifacts range from candleholders and spoons to bronze sculptures, armor and weapons, jewelry, household objects, even a bathtub. 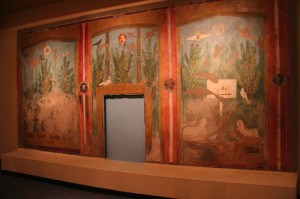 Garden frescoes of a Pompeiian villa

From garden frescoes and marble statues to helmets and shin guards of the day’s gladiators, coins and currency to religious altars and shrines—all are set in their original surroundings. Stunning mosaics and wall-size frescoes were amazingly well-preserved by the layers of volcanic ash. An anchor, found southwest of Pompeii at the mouth of the Sarno River, is missing the original wood trim but serves as a reminder that the city was an important port and hub for trade.

Early excavators didn’t much care where a particular statue or mosaic fragment had been found. Rather it was the stories that might be coaxed from them. All the artifacts are on loan from the Naples National Archaeological Museum, which excavated them from Pompeii and the nearby towns of Herculaneum and Boscoreale, also affected by the volcano.

“The exhibition gives us a broad overview of all the different walks of life who were in operation on that particular day,” said Brian Rose, a University of Pennsylvania archaeologist who served as one of the exhibition’s technical advisers. “Not only are you seeing the kinds of houses they had, but the kinds of objects and tools they used.”

This level of detail is rarely found in other archaeological digs in Italy, explained Rose.

The catastrophic strength and power of volcanoes is illustrated through an immersive CGI film experience in a simulation of the eruption of Mount Vesuvius, and its deathly impact and destruction. Most victims died instantly as the superheated air burned their lungs and contracted their muscles, leaving the bodies in a semi-curled position to be quickly buried in ash and thus preserved in detail for hundreds of years.

Hold on for the exhibition’s dramatic finale.  Some of Pompeii’s last hours are brought eerily to life by plaster casts of residents at the moment the eruption overtook them. Excavators poured plaster into  cavities left in the ash after bodies decomposed. Some of the figures are on their feet. Some are hunched up on the ground, others in groups. All are preserved in their final moments.

Much of what we know and understand about life at this time comes from the ruins of Pompeii.  Ongoing excavations at the site continue to provide an ever-evolving picture of this epic era of at the height of the Roman Empire.

Photos courtesy of the Franklin Institute