A Peek Inside Longwood’s “Orchid Extravaganza” 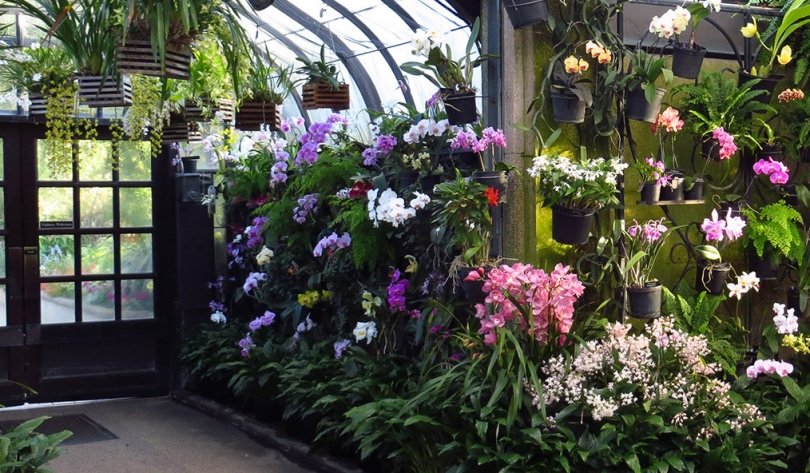 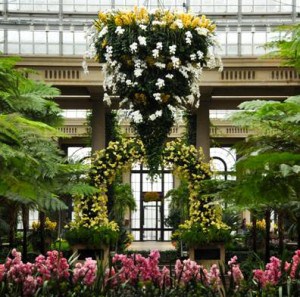 The Orchid Chandelier at Longwood Gardens

Had enough of winter’s Arctic blasts?  Need a taste of spring to cure it? This winter at Longwood Gardens, your escape is “Orchid Extravaganza”– a world filled with the beautiful, sometimes bizarre, often fragrant flowers that come in almost every color, shape, and size.

One of the largest groups of flowering plants on the planet, orchids can be found on every continent except Antarctica and in almost every conceivable habitat. Mesmerizing and seductive, some orchids live on the ground while others grow perched on trees or rocks. Vanilla and some of its allies scramble up shrubs and trees or are lianas that grow up forest trees, using its roots for support.

The delicate and graceful plants become works of art inside Longwood’s lush four-acre Conservatory, located southwest of Philadelphia in Kennett Square, Pa.  The exhibit features stunning displays of orchids in planting beds, containers and innovative arrangements throughout the exhibition that runs to March 30.

People have long held a fascination with orchids. During the grand age of plant exploration in the 19th century, people collected them with a maddening frenzy, because the exotic flowers were like nothing ever seen.  Orchids were one of the first collections to be developed by founder Pierre S. du Pont and his wife Alice, for their then home gardens at Longwood in 1922. 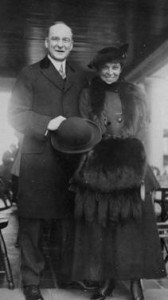 The tradition of orchids all began with a gift. In 1922, twelve Cattleya orchids were included in a gift of greenhouse plants from Mrs. Dimmick of Scranton, Pennsylvania to Mrs. Alice B. du Pont. It might have ended there, as one-time gifts sometimes do. These first orchids did not fare well, due to the grower’s limited knowledge of their needs and habits.

But Alice du Pont’s interest in orchids grew. She and her husband were among 100 charter members of the American Orchid Society (AOS), founded in 1921 and whose mission, to this day, is “to promote and support the passion for orchids through education, conservation, and research.” In 1924, Alice was elected vice president of the AOS, and she served in that position until her death in 1944, at which time Pierre took over the office.

In 1948, the collection was greatly enlarged when du Pont’s sister-in-law, Mrs. William K. du Pont, donated her well-known and respected collection of more than 2,300 orchid plants. Her orchid grower, Bruce Scott, accompanied these plants to Longwood, adding his considerable knowledge to that of the other gardeners. He would become Longwood’s head orchid grower upon the death of Louis Jacoby in 1956, and would occupy that role until his retirement in 1962. At this time period Longwood’s gardeners would have worn ties and white shirts buttoned at the wrists while they worked with plants and soil each day.

Orchids, books, knowledge—handed from one to another as gift, passed through generations as legacy. For that reason, Longwood celebrates the orchid each year in honor of the du Ponts by displaying almost 5,000 orchids blooming in the Conservatory on the walls, in hanging baskets, and forming floral arches. But why stage this show of these amazing curiosities of nature during the dead of winter? 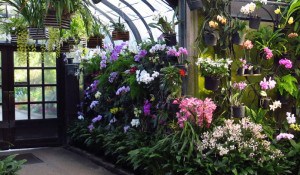 One of the Orchid Growing Houses

“The reason is simple: orchids are the rock stars of the plant kingdom,” said Paul Redman, president of Longwood Gardens.  “Well, they are at least one of the rock stars. The real reason for displaying orchids this time of year is that most orchid species are in peak flower from early January through late spring. Orchids can be found in most every climate of the world, but they are particularly bountiful in the tropics where the winter season brings rain, and with it lots of orchid flowers.”

Today, people continue to be inspired by the exotic nature of orchids because their beauty is deceivingly fragile. While it is true some orchids are finicky, many are not. The Orchid Extravaganza display features orchids like Cymbidium, Oncidium, Phalaenopsis, and Dendrobium that the novice gardener can work with and grow at home.

“If you want to be daring, I challenge you to immerse yourself into our diverse orchid collection in our Orchid House,” Redman remarked. “You will see an entire range of species, both common and rare, like no other place in the world. The orchids on display in our Orchid House are hand-picked daily from our vast collection behind the scenes.”

Many orchids are in bloom now in the warm climate growing house. Each of Longwood’s five orchid growing houses have different temperature settings to accommodate the preferences of nearly 9,000  plants. Redman says orchids actually like winter.

“The orchid room, which houses our permanent collection of orchids, really comes to life this time of year,” he noted. “Most people don’t think of winter as being a good time of year for plants to be flowering, but it is actually this time of year that orchids are in their glory.” 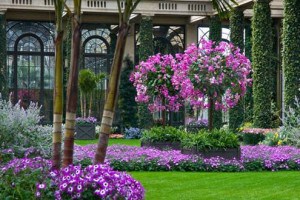 Orchids in the Main Conservatory at Longwood

Miltoniopsis (Mil-tone-ee-OP-sis) Eros ‘Kensington’ is commonly called a pansy orchid since the flowers look like large pansies while the flower’s center pattern act as runway lights to guide pollinators in for landing. While reds are the most common of orchid color, shades of white, pink, and yellow are also seen in the display throughout the year at Longwood.

Spend some time observing the spectacular orchid chandelier suspended in the Exhibition Hall designed, fabricated, and installed by the professionals of Longwood. Their sheer genius of engineering, artistry, and curation stamps Longwood Gardens one of the top horticulture centers in the world.

Come March visitors will discover a special “something blue.” It’s the one time of year you can seerare blue poppies in an inspiring display of sky blue blooms. And don’t forget to peek “Behind the Garden Gates” on special Saturdays Longwood has set aside so you can chat with today’s orchid, garden, and design experts.