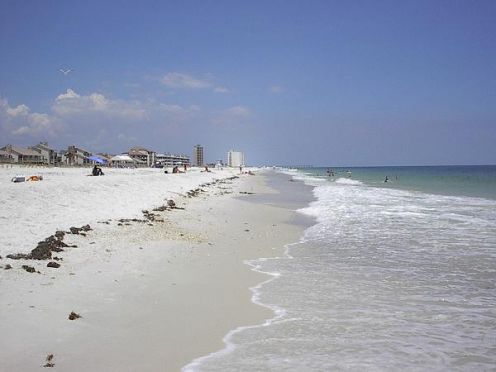 If you’re keeping score, Pensacola was the first city in America officially settled by Europeans.  Located at the western tip of Florida’s Panhandle, its rolling dunes give way to soft, sugar-white sand beaches that greeted the first Spanish explorers in 1559. 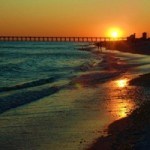 With its natural deep waters and the protection of a barrier island, the harbor emerged as a strategic military and shipping location. Indeed, Pensacola was a hotly contested seaport flying the flags of the Spanish, French, English, Americans and Confederates throughout its history.

Today, Pensacola Beach is a favorite Gulf of Mexico destination. Encompassing eight miles of the 40-mile-long Santa Rosa barrier island, Pensacola Beach is surrounded by the Santa Rosa Sound and the Gulf to the north and south.  It’s flanked on either side by the federally protected Gulf Islands National Seashore that ripples 150 miles along the coastline to Mississippi.  The Pensacola and Escambia bays stretch out into the Gulf of Mexico and offer everything from canoeing and kayaking to diving and top-flight fishing.

You’ll find 120-pound cobia running less than a mile off the beach, while the bays offer anglers flounder, speckled trout and mullet as well as snapper and grouper or you can fish deep waters for marlin or sailfish.

Back on shore, take a stroll over to the Old Pensacola Village.  The Seville Square historic district is an area of restored 19th-century buildings that now house specialty shops, restaurants, museums and galleries.  Nearby the Pensacola Victorian B & B offers four expansive rooms, antiques, and a wrap-around porch with comfy rocking chairs.  The 30,000 square-foot, two-story L&N Railway Depot, circa 1912, serves as a main lobby to the Pensacola Grand Hotel. Connected to the hotel’s modern 15-story tower, it features the original clock and ceramic tile floors in the lobby. 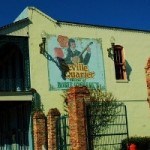 As the “Cradle of Naval Aviation,” the town is home base to the Navy’s Blue Angels, known for their precise aerial acrobatics.   At the entrance to the seven-story glass and steel atrium of the National Museum of Naval Aviation, newcomers are greeted with four A-4 Skyhawks– the Blue Angels’ aircraft– positioned in diving formation.  Each gallery tells stories of military aviation, everything from mementos and flight logs to galleries displaying aircraft circa World War I to the present.  There are more than 170 aircraft, hands-on exhibits abound, and a terrific IMAX theater presentation.  Best of all, admission is free. 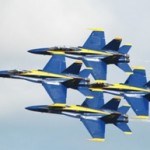 If you’ve worked up an appetite, Pensacola has a lively restaurant scene where you can sample everything from southern barbeque and fresh seafood to Cajun and island specialties.  McGuire’s Irish Pub on Gregory Street is known for its on-site brewery and patron traditions, like kissing a stuffed moosehead and stapling autographed dollar-bill “tips” (more than a thousand at last count) to the ceiling. Its steaks are certified Angus corn-fed beef, and hand cut daily. McGuire’s menu also features more than 20 hamburgers, including the $100 “Grand Burger made of filet mignon. It’s served with a side of caviar and a grand magnum of Moet champagne.

At the corner of Palafox and Zaragoza downtown, Jackson’s boasts fine dining in a beautifully restored 1860s building that overlooks the Plaza Ferdinand.  It’s the site where General Andrew Jackson accepted the transfer of Florida from Spain to the U.S. in 1821.  Try the wet-aged beef, the Sezchuan pepper tuna or peanut-crusted Florida striped bass with a bottle from Jackson’s award-winning wine selection.

For more casual eateries, stop by Dharma Blue in a quaint cottage peering out over Seville Square where tasty dishes include polenta and eggplant Napoleon, black bean burgers and molasses brined pork chops.  Atlas Oyster House prides itself uin a variety of mollusk, steamed seafood and is the sister restaurant to the popular Fish House. 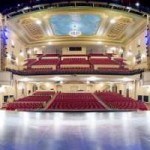 Nightlife percolates in the heart of downtown from the Emerald City dance club to the Sanger Theater that presents music acts from the Indigo Girls to Roger Whittaker.  The Seville Quarter features everything from Dixieland to Motown to its famed “dueling piano” show.  Over at the Art Bar, a Celtic music band provides the sounds as patrons polish off glasses of chardonnay and merlot while pondering the collection of paintings, sculptures, photography and glasswork that fill the walls and nearly all the rest of the establishment.

You’ll find sensational blues, country, rock and gospel music cooking at the Flora-Bama Lounge in Perdido Key 365 days a year.  The beachside bar and oyster house also serves up–  hands-down– the region’s wackiest event, the Interstate Mullet Toss. It’s a rite of spring held each April (26-28) on the beach where Florida and Alabama meet. This year the weekend bash marks its 29th edition that annually raises over $20,000 for local charities, especially youth organizations. 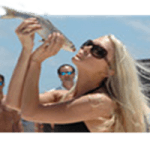 It shapes up like this:  contestants line up on the beach to pitch a one-pound mullet (it’s dead and later fed to the birds) from a 10-foot circle in Alabama across the state line into Florida.  The furthest toss wins!