“Pittsburgh Has Become The “GREEN City.”

I love Pittsburgh.  I grew up near there and lived and worked in the city after college and during the early months of married life.  While much has changed, somethings are still the same — the University of Pittsburgh’s “Cathedral of Learning” classroom tower where I did my graduate studies is still there, as is the YMCA building where I lived at Third and Wood Streets downtown (although today its a fancy condo).  When I lived there, Pittsburgh was still  “The Steel City” dominated by the industrial might of the giant American steel industry.  Smokey, gritty, and dirty. But its changed a lot.

Today, Pittsburgh is sparkling clean and, well, beautiful.  While other steel cities in America have languished, this city has successfully reinvented itself.   GRAY has now become GREEN.  Pittsburgh’s David L. Lawrence Convention Center’s is committed to environmental sustainability.  It was built green in 2003 and operates green today. It recycles, it composts, it reduces toxic emissions, it reduces energy use, it operates a gray water reclamation plant, it uses natural cool air, it grows vegetables & herbs, it uses natural resources, it purchases green, it donates unwanted supplies, and it thinks green first in everything it does. 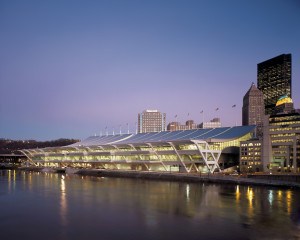 Pittsburgh Convention Center, built in 2003, is a Platinum LEED® certified facility that hosted the G-20 conference of world leaders in 2009.

The Convention Center has recently received Platinum LEED® certification for its unique design, the ability to preserve water, the use of natural air movement, the abundance of daylight, its downtown location, and its ability to recycle.

In 2011, a $9.5 million Convention Center Riverfront Plaza was opened.  The Plaza connects the Convention Center to Point State Park (where the Allegheny and Monongehala Rivers meet to form the Ohio River) and The Strip District (popular for shopping and restaurants) by way of the Three Rivers Heritage Trail, a popular hiking, running, and biking trail. 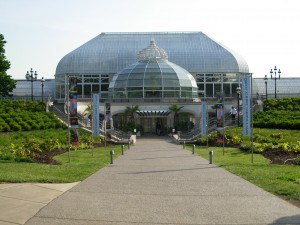 Phipps Conservatory’s new entrance building is Silver LEED® certified, and the organization is a world leader in the development of sustainable environments.

Phipps Conservatory and Botanical Gardens is listed on the National Register of Historic Places.  Founded in 1893 by steel and real-estate magnate Henry Phipps as a gift to the City to educate and entertain visitors. Currently, the facilities house elaborate gardens within the thirteen room conservatory itself and on the adjoining grounds. The entrance pavilion of the Phipps has silver-level LEED® certification.

Its new Center for Sustainable Landscapes opened in Spring 2012, and is one of the world’s first certified living buildings, a model of sustainability for architects, scientists, planners and anyone interested in living greener. Phipps’ dynamic new center for education, research and administration generates all of its own energy and capture and treat all of its own water on site, meeting or exceeding the three highest green standards: the Living Building Challenge; LEED® Platinum and SITES Certification for landscapes. 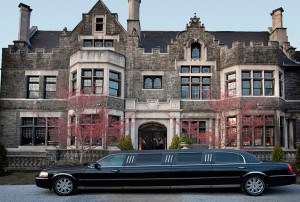 Mansions on Fifth is a boutique hotel built in 1903 as a private residence on Pittsburgh’s Millionaire’s Row. Completely restored, its now a National Historic Site and GREEN.

When visiting Pittsburgh, you’ll want to stay at Mansions on Fifth, a boutique hotel near the Phipps Conservatory.  Built in 1903, the 35 room stone mansion was part of Millionaire’s Row.  Now fully restored to its original beauty and grandeur it has all the modern amenities and conveniences of a fine hotel, and its GREEN.  Service is impeccable and dining exceptional.  Learn more at www.mansionsonfifth.com. 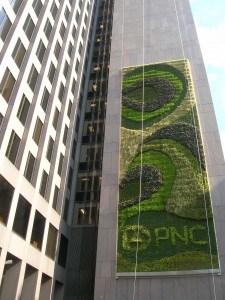 The PNC Bank Corporate Headquarters in
downtown Pittsburgh has a growing wall mural on the side of its building signifying its commitment of a sustainable environment.

The PNC Bank Corporate Headquarters in downtown, a GREEN skyscraper, has a giant mural of growing plants on an exterior wall as a reminder of its commitment to a sustainable environment.  Go GREEN, go Pittsburgh.

Plan to visit Pittsburgh and begin your planning
at  www.visitpittsburgh.com.