Home » Blog » Off to the Races

Off to the Races 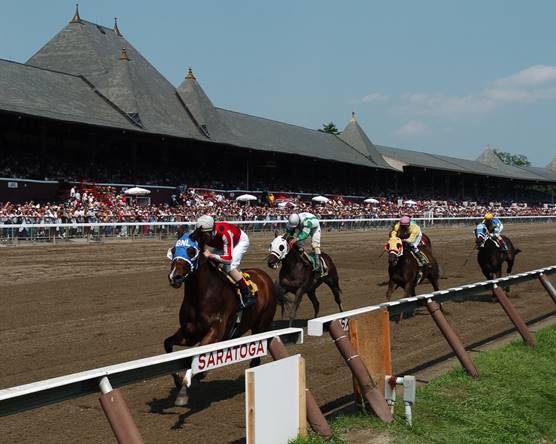 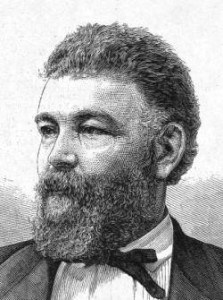 Morrissey was once the muscle for the Irish mob, a bare-knuckle boxing champion, a casino owner and a Congressman. But his greatest accomplishment was when he staged a four-day thoroughbred race meet in this little patch of horse heaven in upstate New York during the height of the Civil War.

While the Union army was requisitioning every healthy horse it could find, Morrissey somehow managed to convince several wealthy sportsmen to support racing at Saratoga. While war raged elsewhere, Morrissey rounded up 26 quality thoroughbreds to run at the old trotting grounds. The date was August 3, 1863, described as a “shimmering summer day” by an old newspaper account.

A year later Morrissey built a grand racecourse across the street from the original track and “Old Smoke” presided over it with an iron first to make sure that his endeavor would thrive.

Like the mythical Scottish village of Brigadoon, Saratoga Springs comes to life each summer for folks who follow America’s finest and fastest horses.  The village of pastel Victorian homes swells with horseplayers from July 20 through Labor Day. One of the highlights of the 151st year celebration will be a pivotal race for three-year old colts, the $1 million Travers Stakes on Aug. 23rd.

A gateway to the blue woods and green creeks of Adirondack Mountains, Saratoga has long been celebrated for the curative powers of its soothing mineral springs and the Saratoga Race Course, America’s oldest and most iconic sports venue. Known for its steeply raked roof and lazily spinning ceiling fans, the original Victorian grandstand salutes a bygone era. 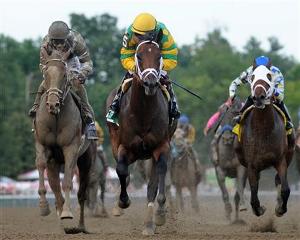 Bordering Union Avenue, the track’s stables shelter more than 1800 horses that travel with rock-star like entourages that include trainers and their assistants, grooms, a companion horse or pony and even stable pals of dogs or goats.

Shortly after sunrise, a stream of thoroughbreds stop traffic as they clip-clop across Union. One after another they thunder over the dirt track– some dueling eyeball to eyeball– their workouts punctuated by heavy breathing and labored snorts.

A tuxedoed maitre’d leads racing fans to their track side breakfast tables at an open-air restaurant beneath the grandstands red-and-white awning.  Quite a few train their binoculars on the colts and fillies that zip by, others sip champagne and Bloody Mary’s while poring over the Daily Racing Form and tip sheets mapping out the afternoon’s wagers.

Nearing one o’clock a ship’s bell signals that the first race’s horses are headed to the paddock shaded by elms and sugar maples.  Jockeys dressed in a dazzling kaleidoscope of silks pen autographs and exchange pleasantries with the crowd on the way to the paddock.  Riders and their mounts– their gleaming muscles bulging– file past, mere feet away.  You hop an escalator to the clubhouse or grandstand, place your bets and take a seat.  It’s post time.  Track announcer Tom Durkin bellows “And They’re Off,” and the day’s action begins. 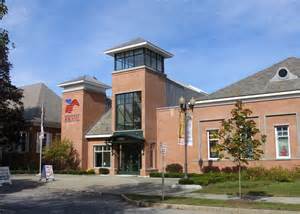 Prior to the races if you stroll across Union Avenue visitors will find racing stars of yesteryear at the National Racing Museum.  An $18 million makeover a few years back has produced another Saratoga jewel. Hundreds of plaques that celebrate Hall of Fame horses, jockeys and trainers line the walls. There is also access to equine art, artifacts, memorabilia, film, video, books and historical archives. The museum exhibits cover the entire spectrum of Thoroughbred racing, enhanced by interactive displays. Kids pull down goggles and ride a simulated racehorse.

More than one thousand buildings in Saratoga are on the National Historic Register.  Walking the Victorian neighborhoods visitors admire gothic gables, stained glass windows, gingerbread porches and charming gazebos. One of the most picturesque structures is the Saratoga Arms Inn on Broadway that has the intimate appeal of a B&B and the friendly service of a boutique hotel.  Spend some time on the gorgeous wraparound veranda. It’s great for people watching.

Set among the towering oaks and pines of the 2,300 acre Saratoga Spa State Park resides the Gideon Putman Resort. Named for the founder of Saratoga Springs, the architectural style of the 1930s structure is Georgian revival. It’s a refuge from the fevered scene in town and offers tennis, swimming, luxurious spa treatments and bicycling, hiking and nature trails.

Most summer evenings you can attend several performance venues, including theaters at Skidmore College, smaller playhouses scattered throughout the city, and most memorably, the Saratoga Performing Arts Center. Home to the New York City Ballet and the Philadelphia Orchestra, SPAC serves up a dizzying roll call of rock, country and jazz musicians. 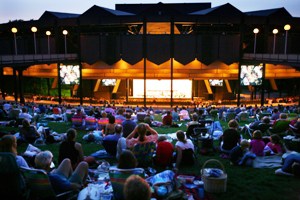 In recent years the likes of Banana Republic, The Loft and Eddie Bauer have infiltrated downtown, but there is still an array of local quaint shops and boutiques.  Don’t miss Impressions, possibly the best themed equine gift shop on the planet. Specializing in fine gifts, memorabilia and casual clothing for horse lovers, star jockeys often turn up to sign autographs.

Saratoga is a lot more than a horse town, though. Take a ride over to the Saratoga Battlefield and learn how the American rag-tag army of colonists whipped the mighty British in 1777. It was the turning point in the Revolutionary War.

Are you an art lover?  Not only are there art galleries downtown, such as the Beresford Gallery (owned by Unionville, Pa.’s Elizabeth Beer) and Gallery 100, but you’ll also find eclectic ranges of works in the local eateries and coffee shops like Uncommon Grounds to view as you enjoy a steamy beverage. 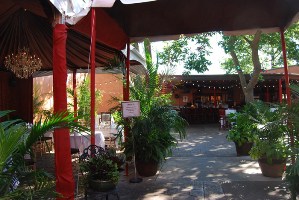 Sperry’s on Caroline Street is a thoroughbred racing season staple. Recently purchased by Saratoga’s mayor, we dined on the garden patio with its atmospherically white twinkling trees. We started with Panzanella salad with fresh mozzarella, heirloom tomatoes, sun-dried tomato foccacia, argula, basil and parmesan. For entrees we selected wasabi shrimp wrapped in smoked bacon, glazed with a thai chili sauce and served with maple glazed baby carrots and french haricots. Perfection was the baked swordfish over homemade succotash with carrot puree and fingerling potato crisps.

In 2013, the night before the feature race, the Jim Dandy Stakes, we attended a fund-raiser for the Saratoga branch of Old Friends that takes care of retired racehorses. It was a fun crowd highlighted by the appearance of superstar jockey Mike Smith and syndicate managing partner Cot Campbell, and the connections of Palace Malice, the Belmont Stakes winner. This year Old Friends celebrated their 5th annual kick-off festivities at the Saratoga Golf & Polo Club.

On Saturday the weather was a sunny delight and the company was good. After polishing off a couple of Shake Shack burgers we headed to the windows. Stayed away from the exotic wagers, won a few, hit one at a generous price, but as usual came away wondering what had happened to all those horses that I should have bet. In the $600,000 Jim Dandy, Wicked Strong took command in the stretch and stormed home the winner. 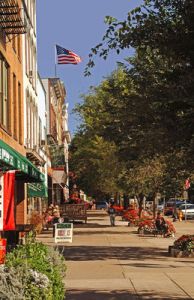 We celebrated over at Siro’s legendary bar. Catty-corner to the track, Siro’s has been party central since the 1930’s. Back then Jimmy Siro, a maître d’hôtel at the Waldorf-Astoria, bought a tiny Italian restaurant, changed the name and welcomed his big-spending Manhattan pals up for some post-race carousing. Known for its neon-blue sign out front, three years ago Siro’s was purchased in part by a pack of movie and television celebrities.

We closed our trip with a superb dinner of Weelfleet (Mass.) clams and U-10 scallops on the Gideon Putnam patio.  Cicadas in the state park chirped a mile a minute in the pleasant evening air, a fire-pit emitting a brilliant glow.  We talked about a return visit, all the while soaking in the timeless tradition of the grand hotel, a fitting tribute to the illustrious history of Saratoga.