Santa Claus Images Have Made Remarkable Changes Over the Years

By Jim Weaver
Santa Claus is one of the most popular image of the Christmas season.  We all love the jolly old man with the long white beard and bright red suit with a “belly that shakes when he laughs like a bowl full of jelly.”  But the Santa we all love and enjoy has changed a great deal over the years.  Like many of our Christmas traditions they can trace their roots to Germany. 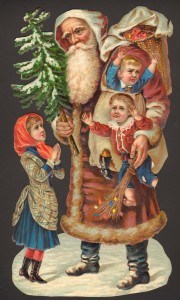 Santa Claus was originally based on Saint Nicholas a third century priest who gave all his worldly goods to help the poor, especially children.  In Germany, St. Nicholas Day is still observed on December 6.  In 1810, the New York Historical Society introduced a new image of Saint Nicholas and called him Santa Claus.  Its an interesting story that can be found at
stnicholascenter.org/pages/origin-of-santa.

The Winterthur Museum and Library near Wilmington, Delaware, holds one of the nation’s foremost collection of American decorative arts.  Its John and Carolyn Grossman Collection consists of more than a quarter million ephemera, color lithograph printed objects from the 19th and early 20th centuries.  Among the Grossman collection are many hundreds of images of Santa Claus.  They reveal how our ideas about Santa have changed over the years. 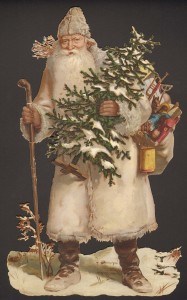 Remembering that Santa was once a saint, some early images show him wearing a mitre (a bishop’s hat) and carrying a crosier (a religious ceremonial staff).  His happy elves are often portrayed as angelic cherubs.  As time passes the religious Santa becomes more secular.  His mitre becomes a fur cap and his crosier a walking stick or cane. 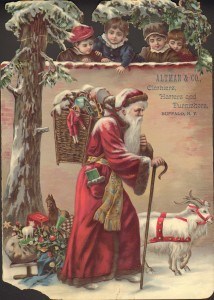 The idea that Santa Claus was an old man with a full white beard and flowing white locks seems to be a consistent feature over the years, but there was at least one bald Santa illustration. The pipe smoking Santa (both long and short stem versions) does not appear until the late 19th century.  While red has been a popular color for Santa’s costume in modern times, it was not always so, nor was the short jacket and snow pants and black boots.

Early Santa’s  are sometimes portrayed wearing full length coats or capes of white, blue, or green, some with hoods.  The Grossman Collection also has an 1867 image of Santa in a brown fur suit, including a fur hat and boots, with a small American flag and smoking a cigarette.  Another image shows him in a black silk top hat, black cape, with a formal walking stick.

While German children once placed their shoes outside the door on Christmas Eve in hopes that they would receive some goodies from Santa, the idea of hanging stockings above the fireplace eventually came into fashion.   A printed silk stocking from the Grossman Collection shows a red costumed Santa at the top and a baby Jesus in a manger at the foot. 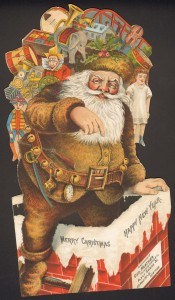 The idea that Santa had a sleigh and eight reindeer for transportation was formed by poet Clement Clark Moore in 1822 when he wrote “’Twas The Night Before Christmas.”  Before then, Santa walked, used snow skis, rode horse back, or was pulled in a small cart by a donkey or two white goats.  The giant bag of toys slung over his back was sometimes substituted by a knapsack-like basket, and toys were simply tied to his large belt. Santa climbing down the chimney to deliver toys also came from Moore’s poem, but was not a common illustration in the Grossman Collection.

The idea of using Christmas gifts as a means to control a child’s behavior comes from Germany, and it was common to see a bundle of switches tucked into Santa’s belt.  One illustration actually showed the switches being used.

In 1931, the Coca-Cola Company began placing ads in popular magazines featuring Santa Claus. The advertising campaigns attempted to show a wholesome Santa who was both realistic and symbolic, not just a man dressed as Santa.  This interpretation became the popular image known worldwide for more than 80 years. 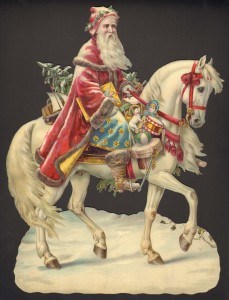 Yuletide at Winterthur (November 23, 2013 through January 5, 2014) explores how Americans have celebrated the winter social season from the 1700s to the present. Guests will journey through time as they tour the magnificently decorated former home of Henry Francis du Pont, whose lavish floral and holiday decorations attracted guests – and praise — from around the world. Winterthur is closed Thanksgiving and Christmas Day, but open New Year’s Day.

Photo Credits: All Photos Courtesy of  The Winterthur Library, The John and Carolyn Grossman Collection