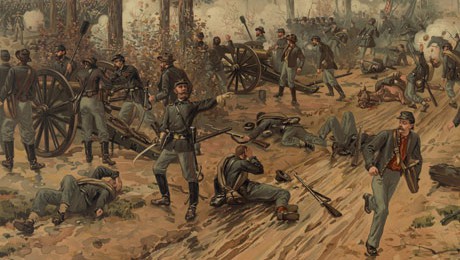 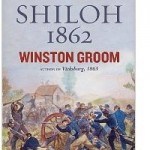 Reviewed by Will A. Davis

When it comes to writing about the history of an American Civil War battle Winston Groom seems to have perfected the recipe. The best selling author of Forest Gump has written two top notch books on the occurrences at the battles of Vicksburg, Mississippi (Vicksburg-1863 ) and most recently one of the most important early battles of the war called Shiloh -1862

On April 6 & 7, 1862 there was a battle in an area of southwestern Tennessee know as Shiloh. Shiloh was an important part of the Union plan to gain control of the Mississippi River and cut off the lifeline of goods aiding the Confederate war effort. Considered a Union victory after the battle ended it is in more ways than one described by Groom as one of the most important battles of the war. Why?

At the time the Civil War was just entering its’ second year and although the battle at Bull Run, Virginia is considered the first “major” fight of the war it was more or less that, a fight. Unseasoned troops had fought on both sides. Now a year later it seems as described by Groom that both sides had “learned how to kill” as some historians have noted. The Shiloh battle would result in over 20,000 casualties about equally divided between Union and Confederate forces.

The wonderful part of Groom’s book is that it is not a facts and figures book only. Groom addresses the multi level involvement of all the participants of the battle. From rank and file soldier to general , from the citizens trapped in the battles terror to the politics of both sides from Abraham Lincoln to Jefferson Davis.

The importance as described by Groom is that each side had a chance to annihilate the other and perhaps bring the war to an earlier conclusion and not linger on for three more brutal years finally ending in April 1865. Groom weaves the facts of the tragic mistakes of Union generals Grant and Sherman, the heroism of brigade and company commanders to hold the day for first the Union and then the Confederate forces. The rendering of the death of rebel commander General Albert Sydney Johnston and the ill fated leadership of his replacement, General Pierre Gustave Toutant Beauregard, are a gripping analysis of the what if’s and what could have been’s of this battle.

Equally important are the stories of the local citizenry and their poignant tales of fear and survival. Groom has certainly done his research in gathering together all of the elements that led to this battle as well as the battle itself and its’ aftermath. It is a book not to be missed not only for Civil war buffs but also for many who might be interested in the humanity and or insanity of any battle and Groom is a master storyteller.