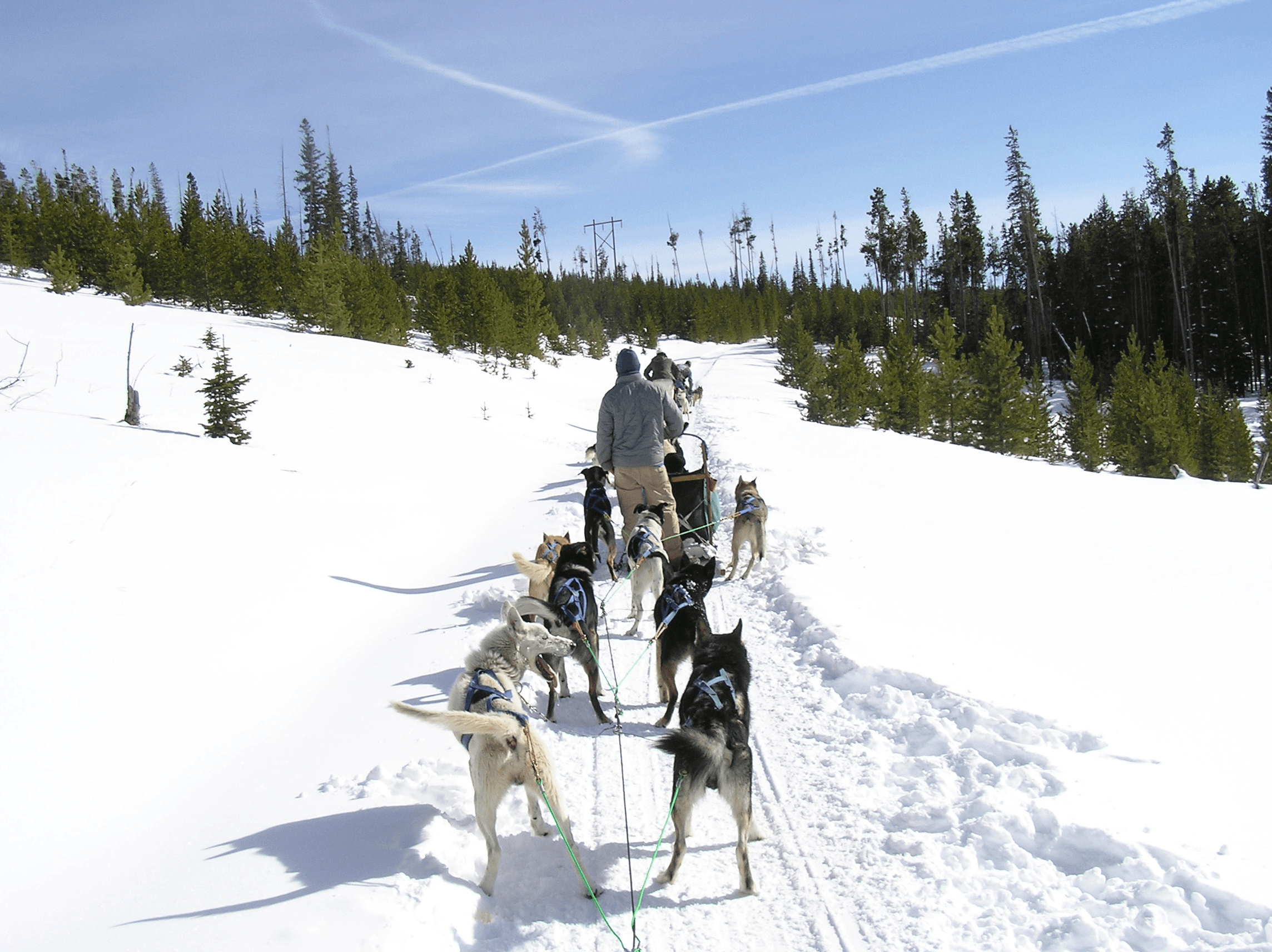 Story and photos By Bud Cole

The usual roller coaster of winter weather patterns during the winter months in Pennsylvania can be compared to the weather events experienced during a recent ski trip to Big Sky, Montana. Cold days and evening snowstorms in the mountains, an hour northwest of Yellowstone National Park, finally changed to clear skies and more moderate temperatures toward the end of the vacation week.
One day is always set aside for an activity away from the ski trails. A morning adventure with The Spirit of the North sled dog outfitter was one we won’t forget. This activity had been at the top of our list for several years, but the weather never seemed to cooperate. But this time beautiful clear blue skies and a soft covering of sparkling new snow was perfect for heading to Moonlight Basin and a totally new experience. 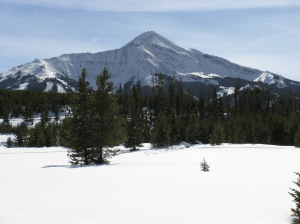 A picture perfect day for a run.

These sled dog adventures become even more exciting when you find out you have the option to drive one of  the dog teams and sleds. Pre-instructions include how to steer the sled and manage the speed of the dogs. For example to turn to the right, the musher (driver) stands and applies pressure on the right runner with the right foot while placing weight on the drag strip – located between the runners – with the left foot. The opposite procedures are required to turn to the left.
The driver steps off the runners and pressed down hard with full body weight on the brake to slow the dogs and bring them to a halt. The brake is a rod with metal teeth that digs into the snow. The drag strip looks like a rough piece of rubber tire material. No verbal dog commands are used. A metal anchor, located in a canvas bag, is stomped into the snow to hold back the team during stops along the trail.

Coincidentally, on the same day as our adventure the annual Iditarod Sled Dog Race in Alaska began. Our sled dog outfitter’s daughter, Jessie Royer, was about to participate in the Iditarod challenge as we listened to instructions on how to direct our sled and dogs through trails in the Moonlight Basin Ranch.

Our guide, Jim, stressed, “If you tip the sled do not let go. All these dogs want to do is run, so be sure to hang on to the sled.” We had eight Alaskan huskies providing the power for our trip. The slender built Alaskan huskies are primarily bred for work and have more endurance for sled racing than the stouter Siberian huskies depicted in most movies featuring sled dogs.

Our lead dog was Beethoven. The outfitter named his dog litters after specific themes. Dogs named Mozart, Bach, Brahms, Strauss and other classical composers filled positions on the teams. 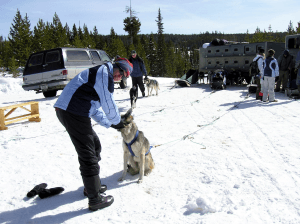 Bev Cole holds the lead dog ,Beethoven, as the others are placed on the line

Each participant has the choice of being as involved or uninvolved in the adventure as they wish. After the driving instructions (which were covered quite quickly when considering the task ahead) we helped hold the lead dog as the rest of the teams’ dogs were attached to the cables to become the sleds power source. Beethoven was attached to the front of the line first. I held him by his collar and harness while Bev held the lead dog on another team until the remaining team members were placed in their positions along the lines. Jim certainly knew his dogs, they definitely wanted to run. They yanked at their harnesses with the sole purpose of beginning the trip as soon as physically possible.

The sled and harnessed dogs were attached to what Jim called the “doggie bus” (the mobile trailer and kennel system used for transporting the dogs from the outfitters home to the trail location). This prevented them from taking off down the trail prematurely. A large metal “O” ring was the major connection between the trailer and the constantly tugging dog team. Jim instructed the drivers to pull down hard on the “O” ring when they were ready to release the sled and dogs from the bus. 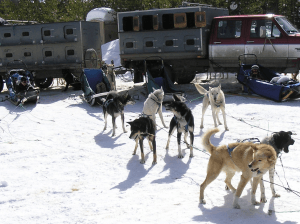 Doggie Bus with kennels in background

Bev drove our team first. And wow, did they burst forward as she gave a hardy tug on the large metal ring allowing them to sprint down the trail. I had all I could do to maintain my balance as I snapped photos from the floor of the sled. Shifting of body positions as well as proper foot placement on the runners, drag strip and brake allowed us to maneuver the sled and stay upright as the dog team raced through the picturesque valley.

Halfway through each trip the teams, mushers and passengers stop for hot chocolate and homemade cookies. The dogs want to keep running and seem disappointed when they are not running. Dogs and sleds are anchored to nearby evergreen trees until the group is ready for the return trip. 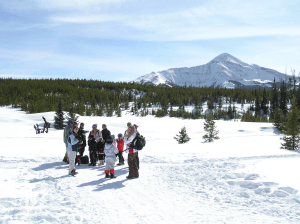 A hot chocolate break does everyone good !

Once the break was over it was my turn to snap down the “O” ring thus releasing the eager dog team on our adventure back to the doggie bus. This outdoor adventure definitely ranks at the top of our memorable outdoor experiences.

Historically, sleds and dogs were linked together by common necessity. Indigenous people of far northern Europe, Asia, Canada and Alaska used dogs for companionship, protection and hunting. Attaching the dogs to sleds was a natural progression from pet to work dog. The invention of snowmobiles and other mechanical means of transportation have lessened the importance of sled dog teams as a means of survival in these frigid lands, but the dogs and their trainers’ significance continues through local competitions. 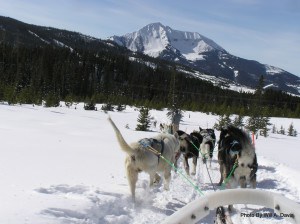 The sled dogs love to run.

The most famous sled dog competition is the Iditarod Trail Sled Dog Race. A diphtheria outbreak occurred in Nome, Alaska in 1925. Serum from the Alaska Railroad Hospital in Anchorage had to be transported to Nome to ward off a fatal epidemic. The 20 pound cylinder of serum started its journey to Nome when it was transported by train from Anchorage to Nenana. The epic excursion continued as 20 native Alaskan mushers and mail carriers used over 100 sled dogs to relay the life-saving medicine on to Nome. The mushers and dog teams transferred the serum from team to team across the 1149 miles of the Iditarod Trail. The dogs ran in relays with no dog running more than 100 miles. Kunnar Kaasen and his lead dog Balto arrived in Nome on February 2, 1925 less than six days after the journey began in Anchorage.

Today the annual Iditarod Race is run between Anchorage and Nome as a way to commemorate this critical journey and the lives that were saved. The first memorial race began on March 3, 1973. Two shorter races were held on parts of the original trail in 1967 and 1969.