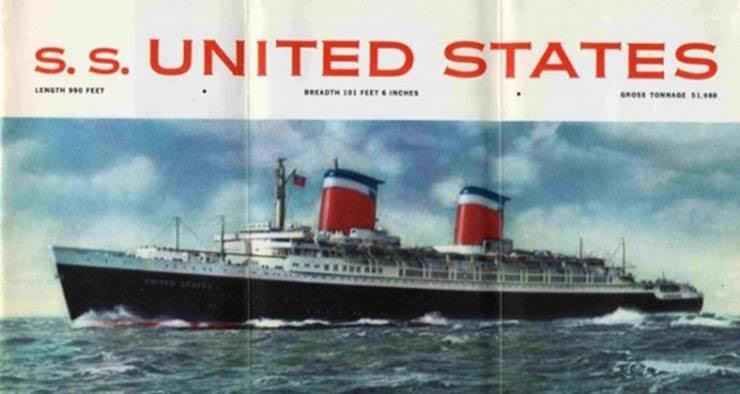 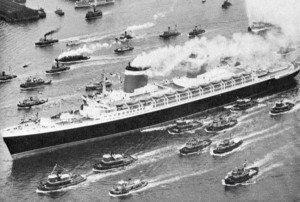 Gutted and rusted, hitched to an unused wharf in South Philadelphia for two decades, things are looking up for the once majestic SS United States. It may yet one day sail again.

In early February the Los Angeles-based Crystal Cruises luxury travel company announced plans to overhaul the ship at a cost of upwards of $800 million. The once sparkling transatlantic steamship is owned by the SS United States Conservancy that struck a deal with Crystal to save the ship. But before the SS United States can be transformed into a modern luxury cruise ship, the vessel must undergo a nine-month technical feasibility study.

During that time period Crystal Cruises has agreed to cover all costs of the $60,000 cost a month associated with preserving the ship, including the ship’s mooring on the Delaware River. The feasibility study is expected to be completed by the end of 2016.

In its glory days during the 1950s, the iconic ship– nicknamed the “Big U”– carried everyone from royalty to Hollywood stars to immigrants across the Atlantic Ocean, accompanied by three on-board orchestras. Passenger lists included Presidents Truman, Eisenhower and Kennedy as well as the Duke and Duchess of Windsor, Princess Grace of Monaco, Gary Grant, Katherine Hepburn, John Wayne, even Leonardo da Vinci’s Mona Lisa painting. Her decor was known for its sleek mid-20th century shapes and vibrant colors, courtesy of an all-female design team led by Dorothy Markwald. 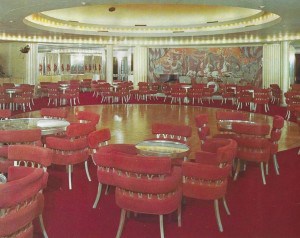 At the time, the ship was the biggest and fastest ocean liner ever built in the United States – at 990 feet, 108 feet longer than the Titanic. On its maiden voyage in 1952 from New York to Southampton, England, the powerful liner’s 268,000-horsepower engines propelled it across the Atlantic in three days, 10 hours, 42 minutes. She won the “Blue Riband” for fastest crossing of the Atlantic in both directions and while her eastbound record was finally beaten by a hydrofoil, she remains the fastest large ocean liner ever built. and it still holds the Blue Riband record for the fastest transatlantic crossing.

As owners of “America’s Flagship,” the non-profit Washington-based SS United States Conservancy fought constantly to save the vessel from destruction. The group also helped secure the just 50-year old ship’s listing on the National Register of Historic Places. However, in recent years– faced with the challenge covering the vessel’s monthly costs– the SS United States Conservancy began exploring options for the potential sale, even scrapping of the ship.

The news ignited an outpouring of public support last fall when the group launched its SOS (“Save Our Ship”) Campaign, which helped raise an additional $600,000 in funds to continue preservation efforts and negotiations with potential investors, ultimately saving it from the scrapyard.

“The prospect of revitalizing the SS United States and reestablishing her as ‘America’s Flagship’ once again is a thrilling one,” said Crystal Cruises CEO Edie Rodriguez at a press conference on Feb. 4.

It will be a very challenging undertaking, but we are determined to apply the dedication and innovation that has always been the ship’s hallmark. We are honored to work with the SS United States Conservancy and government agencies in exploring the technical feasibility study so we can ultimately embark on the journey of transforming her into a sophisticated luxury cruise liner for the modern era.”

Crystal Cruises was created in 1989. Voted “World’s Best Large Ship Cruise Line” by Travel+Leisure readers for 19 consecutive years, NYK sold the company in 2015 to Genting Hong Kong, a global hospitality and leisure company with business in over 20 countries. It is embarking on a massive brand expansion that includes the addition of the most spacious ocean-going ships ever as well as river ships, a yacht and even a luxury airplane. 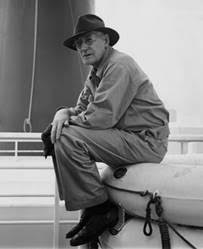 Operating the SS United States would add another marquee travel option for Genting. Launched in 1952 at Newport News Shipbuilding and Dry Dock Company, the historic ship shattered all trans-Atlantic speed records almost immediately after her christening. Upon her delivery to the United States Lines, she was the most graceful, modern, powerful and quite literally the fastest vessel in the world. Her two oversize red, white, and blue funnels projected the very essence of power and American ingenuity to the entire world.

The story of the SS United States is also the story of brilliant marine engineer and naval architect who designed and built her. Boasting a hull length longer than even the later built QE2, the ship was designed by William Francis Gibbs, who reportedly designed over 40 percent of American war ships during World War II. A salty-tongued and superstitious man, Gibbs built a ship with his massive accumulated knowledge and experience in ship design. The SS United States is his masterpiece – designed for both comfort and speed, she could be converted into a troop transport in times of war with the ability to carry 15,000 troops and a 240,000 shaft horsepower propulsion plant capable of traveling 10,000 nautical miles without refueling.

During her heyday, the ship was reported to have been capable of speeds of over 44.7 knots, or about 50 mph –(a tightly held secret throughout the Cold War) and her steam turbine propulsion system was only slightly slower than the engines on today’s nuclear-powered aircraft carriers.

The SS United States embodied the post-WW II “can-do” American spirit and with her endless publicity the ship became a beautiful and compelling national symbol. However, she sailed only for 17 years before being withdrawn from service in 1969 when transatlantic ocean travel had dwindled. The ship remained part of the U.S. Navy’s reserve fleet until 1978 when the Navy decided to sell the vessel to a private owner. The ship was stripped of its interior furnishings in 1984 when items including the china, silverware, furniture, even nautical fixtures were auctioned off. 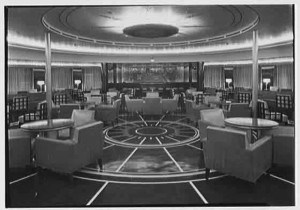 Since then, the SS United States has passed from owner to owner. In 2003 the ship ended up in the hands of Norwegian Cruise Lines, which had plans refurbish the ship and return her to service with the company’s American-flagged cruise service. But the plans fell through with the 2008 financial crisis, and the vessel was again listed for sale a year later.

The historic ship was tossed a life preserver by Crystal Cruises which signed a purchase option for the historic transatlantic steam ship with a goal of bringing the ship into compliance with the latest environmental and safety standards, and returning her to full oceangoing service. Proposed itineraries would include transatlantic voyages from New York City as well as cruises from key U. S. ports and on international voyages around the globe. Still, some critics question the condition of the ship and whether it can restored at all. The feasibility study will provide the answers.

If all goes as intended, the 60,000 gross ton SS United States will not re-emerge as the same ship but as a vastly rebuilt, modern cruise ship that accommodates a mere 800 guests. According to Rodriquez, the ship will boast 400 suites measuring approximately 350 square feet with dining, entertainment, spa and other luxury guest amenities that are true to the ship’s storied history. Features would include gold-leaf embellishments, sculptures and top of the line services and culinary experiences. Also receiving a makeover are the Promenade and Navajo Lounge, which originally boasted a series of sand art paintings depicting Navajo rituals by artist Peter Ostuni. 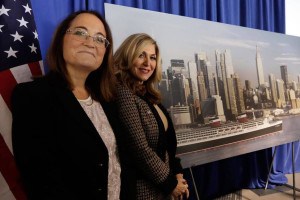 New engines and sophisticated marine technology will be installed to maintain her title as the fastest cruise vessel in the world. The ship is expected to have a 1 to 6 passenger-to-crew ratio. Rodriguez is hopeful that the ship could be taking passengers as soon as 2018.