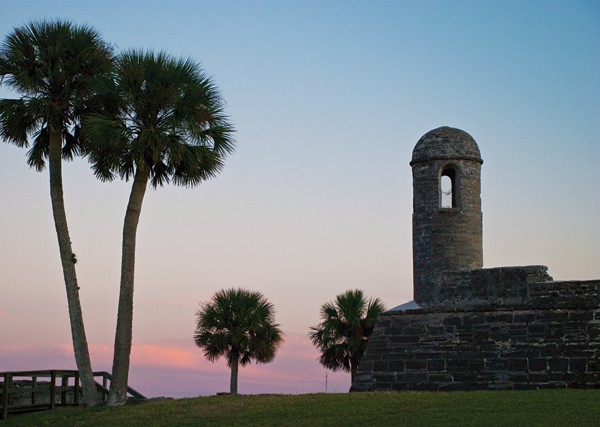 Story by Jeff and Stephanie Sylva 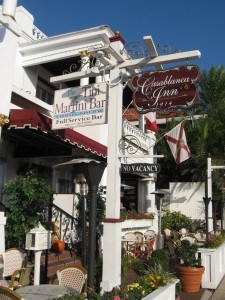 We were seated on the front veranda of the Casablanca Inn in St. Augustine, Florida, a perfect perch from which to view panoramic Matanzas Bay, the passing boats, and the many pedestrians enjoying a romantic stroll along the waterfront. We had checked in to the inn and decided that there was no better time than the present to use the $15 credit for the Inn’s Tini Martini Bar that each guest room receives each day of a stay.

The lure of “Old Florida”

The Casablanca Inn is a charming Bed & Breakfast Inn located on Avenida Menendez, the main avenue along the bay, within easy walking distance to just about all of the highlights of this delightful, historic city where many the enchanting aspects of Old Florida still exist. Built in 1914 the Casablanca Inn is a Mediterranean revival historic home and is listed on the National Register of Historic Places.

The inn has 23 unique rooms and suites, some with awesome views of Matanzas Bay. We had a very comfortable junior suite in the Coach House that included a curbside patio area where we could sit and engage with passers-by on Charlotte St. A few rooms are also privately tucked away in a tropical setting called the Secret Garden. Antique-filled common rooms provide wonderful opportunities to sit, relax and converse – or sip a favorite cocktail in the cozy bar of the Tini Martini Bar.

But it was on the delightful front veranda, where cooling bay breezes and swaying palm trees created the perfect scene, that we enjoyed our morning breakfast and early evening toast to the setting sun. 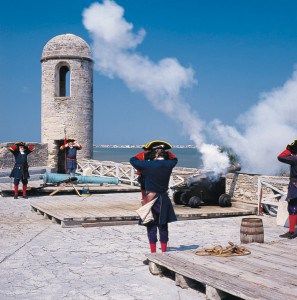 Established in 1565 by the Spanish, St. Augustine is the oldest permanent European settlement in the continental United States. It remained an integral part of Spain’s colonial presence in the New World for 235 years, particularly due to the valuable presence of Castillo de San Marcos, the impressive fortress built by the Spanish and later occupied by British, Confederate, and U.S. soldiers. The Castillo is operated by the National Park Service; and in addition to displaying a number of historic exhibits and artifacts, the fort also conducts some very entertaining live demonstrations.

The Historic District boasts more than 60 buildings built between the 16th and 19th centuries. Take a tour with Old Town Trolley with “Hop-on, Hop-Off” service to 22 stops and narration of more than 100 sights of interest in the Historic District. The tour ticket is good for three days and includes a free Beach Shuttle to Alligator Farm, the St. Augustine Lighthouse and Museum, and the beach, so it’s a great way to get around without the hassle of parking.

In addition to many historic sites, such as Ponce de Leon’s Fountain of Youth, St. Augustine has a variety of museums, such as the Lightner Museum, an outstanding collection of antiquities housed in oil tycoon Henry Flagler’s former Alcazar Hotel. Flagler’s influence is also evident in the grandeur of Flagler College, which was 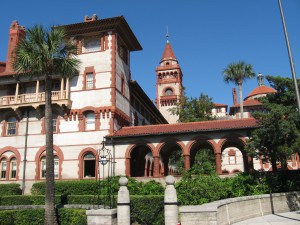 once the Hotel Ponce de Leon and now a National Historic Landmark. And spread among this array of historic sites and buildings is a wealth of trendy restaurants and hip bars and cafes. Two places we wanted to try because of their European-inspired cuisine and atmospheres were Sara’s Crepe Café, a traditional European café serving family-inspired dishes of crepes and European-styled entrees, and Bistro de Leon, a casual bistro serving exquisite traditional French home cuisine – “la cuisine de meres.”

As a tribute to her grandmother Sara and to her love of making crepes, Margarita Abramov, proprietor of Sara’s Crepe Café, fulfilled her dream of opening a restaurant in St. Augustine that would reflect her family’s passion for cooking and entertaining. Margarita, who came to America from Russia in 1978, has rekindled in Sara’s Crepe Cafe the fond childhood memories of her time in her grandmother’s kitchen. 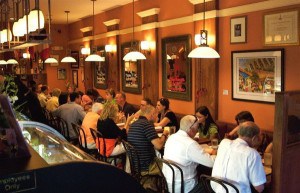 At Bistro de Leon, Chef Jean Stephane Poinard, a 5th generation Chef from Lyon, France, has re-created the best of the “French way” of dining, where the cuisine is the main attraction. The Bistro is simply appointed, much like a quaint village café in France. But the culinary experience, which is to be enjoyed in unhurried fashion, is a work of art. 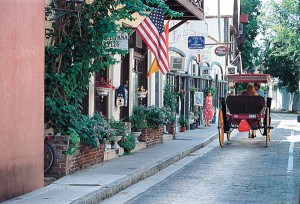 Although they may be a little touristy with T-shirt shops and some kitschy gift stores, pedestrian-only St. George St. and its side streets harbor a number of intriguing cafes, restaurants, and garden bars sporting some wonderful nightly entertainment. We spent a good many hours just strolling these small streets enjoying the “Old Florida” flavor of the Historic District.

A day at the beach

If you get your fill of strolling the quaint streets and parks of St. Augustine, you might want to spend a day with sand between your toes. Just a short drive over the Bridge of Lions takes you to Anastasia Island and St. Augustine Beach. Anastasia State Park has 1,600 acres of unspoiled beaches, tidal salt marshes, and maritime lowland with camping, swimming, picnicking, fishing, hiking, wildlife viewing and an array of watersports.  Kayaks, canoes, windsurfers, stand up paddle

boards, Hobie Cats, Sunfish, and more are available to rent from Anastasia Watersports. 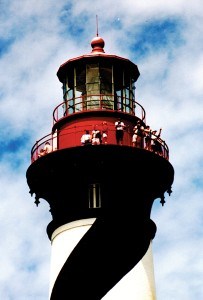 Other beautiful beaches can be found a little further south on A1A in St. Augustine Beach, or north on A1A by crossing the Vilano Causeway to Vilano Beach and Ponte Vedra.