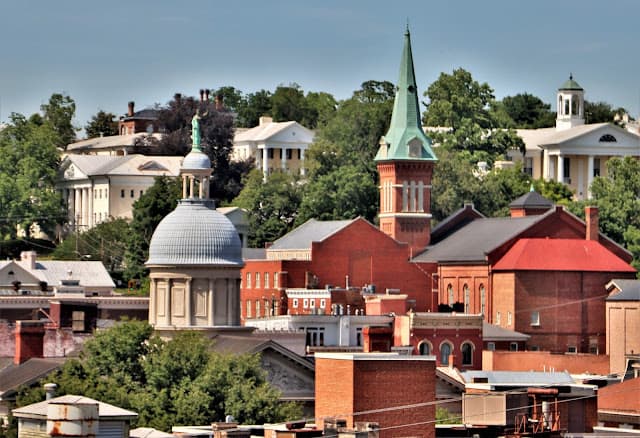 Sometimes it pays to veer away from big city allure and switch your travel plans to someplace less crowded, congested and hectic. Visiting smaller towns can have its own rewards and, if you’d like to give one a try and are within driving distance, you might want to start with Staunton, Virginia.

Located in the beautiful Shenandoah Valley and close to the Blue Ridge Mountains, Staunton (pronounced Stan-ton by the locals and those-in-the-know), is a town of a little more than 24,000 residents and has a charming, walkable cityscape, culture, history, a vibrant food and beverage scene and surprisingly interesting smaller tourist gems.

What follows is a photo essay that covers some of the many sites I visited on a three day visit. 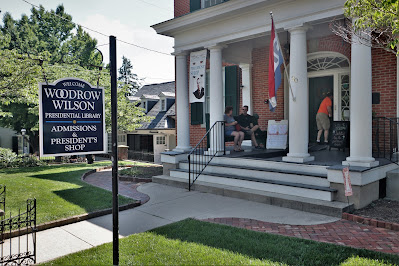 Museum highlights include his 1919 Pierce-Arrow limousine and a state-of-the art World War I trench exhibit, which captures in sound and light effects the trench experience.

The 1846 house where Wilson was born in 1856 is a short walk up the block. An authentic example of a Shenandoah Valley home during the pre-Civil War era, this National Historic Landmark is decorated with period furnishings, including Woodrow Wilson family treasures.

Staunton can boast of having the world’s only authentic reproduction of Shakespeare’s indoor theater, the Blackfriars Playhouse. After years of research, the theatre was rebuilt in 2001 at a cost of $3.7 million. The theatre is open year-round, performing both Shakespeare’s plays as well as contemporary works.

Currently onstage are Macbeth and Henry V. Group tours of the playhouse (45 minutes) are also offered year-round. The Blackfriars is located at 10 S. Market Street.

Adjacent to Blackfriars is Staunton’s grand dame hotel, Hotel 24 South, located at 24 S. Market St. Built in the Colonial Revivalist style the hotel opened in 1924 and underwent a $21.1 million restoration in 2005. The mezzanine hold the original 1924 Wurlitzer organ, the only one known to be still working.

A short drive from downtown at 1290 Richmond Road, the Frontier Culture Museum sprawls over nearly 200 acres of mostly level ground. A living history center with well informed interpreters, the museum explores the lives of people who immigrated to the Shenandoah Valley from the Old World starting in the 1600s.

Museum buildings, either original from Europe or reconstructed, include an Igbo West African Farm, a 1600s English Farm, a 1700s Irish Farm, an Irish Forge and a 1700s German Farm.

Many immigrants were farmers and rural craftsmen set in motion by changing conditions in their homelands and drawn to the American colonies by opportunities for a better life. Others came as unwilling captives to work on farms and plantations.

Regardless of how they arrived, all became Americans, and all contributed to the success of the colonies, and of the United States.

Staunton boasts many fine craftsmen and artisans. Several shops worth a visit are found clustered around the Staunton Farmers’ Market, 110 Johnson Street

The market is open from 7 a.m. to noon Saturdays from April to September.

Staunton has some sophisticated shops as well.

You can see some gorgeous glass creations.
Then catch a glass blowing demo and try your own hand at the craft.

Catch the interesting architecture on Beverly Street. Downtown Staunton has many examples of Virginia’s finest Victorian architecture, and the Beverly Historic District was listed on the National Register of Historic Places in 1981. The Umbrella Building below dates back to 1895.

Explore One of the Quaint Museums in Downtown

There are several wineries in the region.

There’s cider and beer as well.

Staunton has a vibrant food scene. Restaurants offer everything from traditional fare to more exotic meals all within walking distance. Whether you’re in the mood for something classic or crave something a bit more contemporary, your culinary palate is sure to be appeased.

Opened in 1994, Emilio’s specializes in Italian fare that traces its roots and recipes back to Sicily.

The sauces are what makes Emilio’s extra special.

Why stop at dessert?

Staunton has a wide range of ethnic eateries, specializing in foods from around the world.

You can choose from the menu, or create your own dish based on your own taste, preference, or dietary needs. Menu bowls include House Poke, Hawaiian Chicken, Salmon Sashimi and more.

101 Bev also offers bottled sake as well as some brands in cans. The personable staff add to the experience.

For a place to rest after a hard day’s touring and adventures, the Frederick House is located at 28 N. New St. in Staunton’s historic district. Comprised of 5 historic houses, the Frederick House offers 20 guest rooms unique in both size and style. Whether you are looking for a cozy, simple room for an overnight stay or a luxurious suite for a week long vacation, the inn has you covered.

The inn offers the privacy of a hotel, with the personal experience of a Bed and Breakfast. In the morning, enjoy a hot, homemade breakfast selected from the popular and highly rated set breakfast menu.

For reservations and more information, phone 540-885-4220 or www.frederickhouse.com