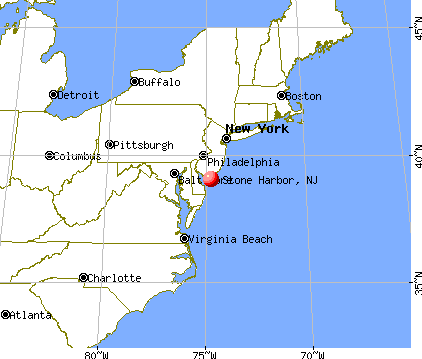 They’re perched 400 feet above the Atlantic, hanging below a large bright blue parachute. The man and woman are parasailing, soaring through the sky like a pair of shorebirds. Below, a towrope keeps the couple tethered to the speedboat racing through the coastal waters of Stone Harbor, N. J. 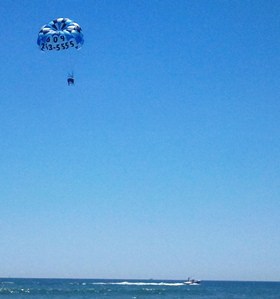 Just another day in paradise. The picturesque beach town of Stone Harbor is located on the southern end of a narrow barrier island it shares with Avalon between The Wildwoods and Ocean City. This summer marks the 100th anniversary of Stone Harbor’s incorporation.

The beach is Stone Harbor’s star attraction, and great effort is taken to preserve it. Last summer upwards of 800,000 cubic yards of sand were dredged offshore and added to the Stone Harbor beaches, the first line of defense during any coastal storm.

Beachgoers over age 12 must carry beach tags, sold in daily, weekly or seasonal increments. In part the fees help support healthy living sand systems full of trees, shrubs, and plentiful reed grass with roots that fan out beneath the dunes. Dynamic systems that grow and shrink, the dunes rise to more than 40 feet in places in Stone Harbor.

Thanks to a historically tight grip on development, Stone Harbor remains a small, quiet residential seashore town. The borough attracts a summer population of upwards of 25,000 people, but that number pales compared with other Jersey shore resorts. Its streets are lined with elegant Victorian and American Foursquare-style houses that snuggle alongside vine covered small single story cottages, many dating back to the early 1900s. Flashes of candy colors appear all over the island. 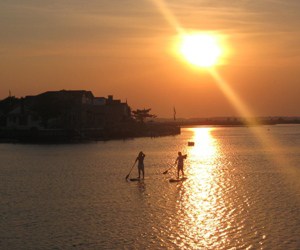 Paddleboarding at The Reeds at Shelter Haven

The Reeds at Shelter Haven opened its doors last June. A boutique hotel at the corner of 96th Street and Third Avenue, the name references the elegant Shelter Haven Hotel, which was constructed in 1912 on the same spot. Comprising 37 rooms and suites, The Reeds is a three story cedar-shake building that overlooks Shelter Haven Bay. Design touches include wrought-iron cattails, glass mosaic walls and driftwood inspired chandeliers. New amenities this season are paddleboarding and early morning yoga classes.

The Reeds offers possibly the best one-two dining punch at any South Jersey resort. The Water Star Grille takes full advantage of its generous panorama of the bay and the gorgeous sunsets. It features an outdoor kitchen, a lively wraparound bar and casual deck dining under chic orange umbrellas. Indoors at the more intimate SAX, a fresh burst of culinary energy is delivered by executive chef Tim Hamill.

Ringo Starr visited Stone Harbor in June, well sort of. Tucked across from The Reeds is Ocean Galleries with an ever-changing display of local artists’ watercolors, nationally-recognized artists’ originals, popular beach prints and high-end reproductions. The Beatles’ iconic drummer’s artwork sold for $1,800 to $8,000 with all buyers invited to a meet-and-greet reception with Starr in Atlantic City. Famed pop artist Peter Max has turned up at Ocean Galleries over the past ten summers, presenting an original show of his brightly-hued paintings in every size and style.

A short stroll up Third Avenue brings you to Springer’s Homemade Ice Cream where lines into the clapboard building sometimes stretch for a block. But few complain since the end result is the scrumptious ice cream made by hand daily. Featuring upwards of 65 varieties, they include the old standbys of vanilla and chocolate, as well as black raspberry, peanut butter cup and all the chips, including Springer chip made with coffee ice cream.

Ristorante Luciano is one of the town’s most pleasurable dining experiences. A study in brick, stone and tile, its walls are adorned with a handful of well chosen black and white photos of an earlier era and generation. Luciano is the chef, brother Joe is the front-man, and their mother still makes the pasta daily The wait staff is outfitted in classic black and white, looking every bit the part of handsome Italian servers.

We started with the evening’s special appetizer — fresh figs stuffed with gorgonzola, wrapped with prosciutto and drizzled with a balsamic reduction — deceptively simple and perfectly prepared. The dinner that followed was also spot-on with two veal dishes, the principessa with lump crab, asparagus and fontina and the champagne style with artichoke hearts and mushrooms. Don’t miss the homemade cheese gnocchi — a Stone Harbor gem. Reservations at the BYOB are a must as the 75 seats go quickly. 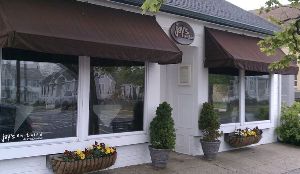 The following evening we dined with our pal Joan at Jay’s on Third. Also a BYOB, Jay’s has a lovely and thoughtful menu driven by fresh ingredients and splendid creativity. We settled on the shrimp pad thai, the Northwest halibut and the day’s special of pan seared foie gras with diver scallops and a fricasse salad. Each dish was beautifully prepared and simply presented. Bon appetite!

Stone Harbor’s Farmers Market, staged each Sunday morning in July and August, is a landmark in its own right. Freshly cut flowers, fruits, vegetables, bread, jam, berries, honey, imported cheeses, and freshly ground coffee can be found in the parking lot beneath the water tower. Locals favor Donna’s Place at 107th Street for breakfast and lunch. Taylor Swift worked there as a teen. Next door is Kenny’s Fish Market that spotlights stellar clams, oysters, shrimp, mussels, lobster clam chowder (white), seafood chowder (red), and the fresh catch of the day. They will cook your selections to take out or you can buy your favorites and cook as you prefer.

When the sun goes down the Windrift Resort Hotel is party central at 80th Street. Renovated in recent years, it boasts five distinctive bars/lounges with four live music spots. The best addition is the spectacular ocean view bar and restaurant on the second level where we joined a raucous crowd viewing the U. S.’s stirring victory in their opening World Cup match. The Windrift books some of the region’s best bands. Wednesday nights you find “Dueling Pianos” at a downstairs bar. Tuesdays are famous for “Wing Night.” Try a Beergarita or few, anytime.

One of Stone Harbor’s Lifeguard Boats

You can find wild life of a different variety at the Wetlands Institute. Birds skimming low in a setting sun to pluck dinner from a tidal creek? How about terrapins plodding through the salt marsh grasses? Situated on 6,000 acres of coastal wetlands, the Institute is a living laboratory where more than 40,000 visitors each year learn about life on this thin ribbon between land and sea.

Stone Harbor has always been an unassuming, quiet community first, and a beach resort second. For those looking for a laid-back holiday, you can’t do much better than the ocean breezes, plentiful wildlife, a bumper crop of splendid dining experiences, and a beguiling small town charm. Happy 100th, guys!