What Do Tall Ships, Frank Lloyd Wright, Lighthouses and an Unusual State Park Have in Common? Try Erie, Pa. 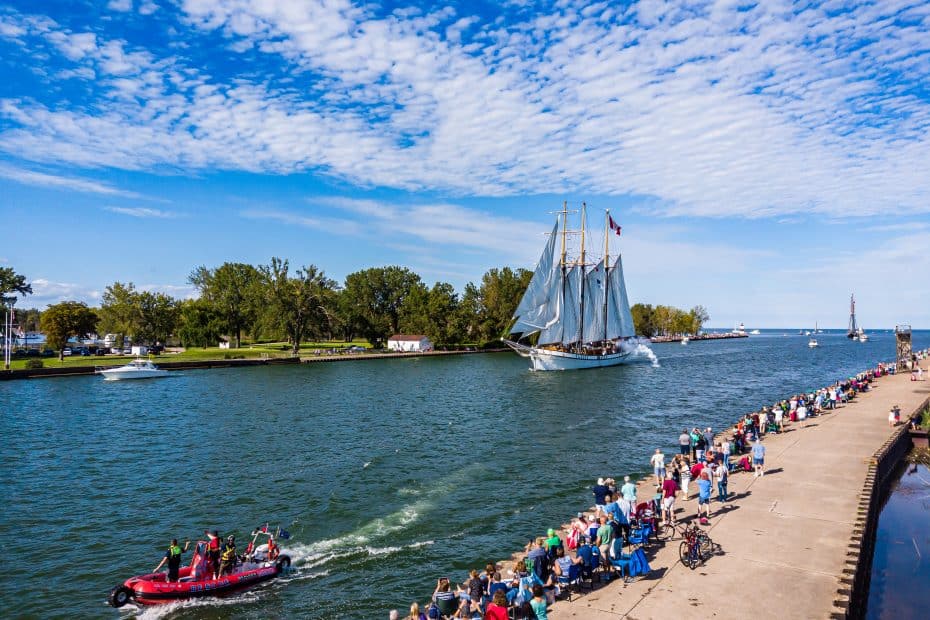 Driving along W. Sixth Street in Erie on my way to the Hagen History Center, I was amazed to see mansion after luxurious manse lining both sides of the street. It’s what the local gentry like to call historic Millionaires Row.

At the Hagen, itself, executive director Cal Pifer met me in the parking lot. After a brief rundown of the center, he opened the door to the magnificent Watson-Curtze House, built in 1891 in the Richardson Romanesque style.

Stepping into the parlor, I was awed at the room’s splendor, and especially the mantel over the fireplace, covered in gold leaf. More amazement came as we strode through the sun-filled solarium, ballroom and other rooms. Jotted down in my notes are displays like the Griswald cast iron kitchenware, the flag draped over Lincoln’s coffin when his funeral cortege stopped in Albany and Oliver Hazard Perry‘s telescope and sword, exhibited in a case in the New Exhibit Building.

As an amateur history bluff, I was delighted to stroll through the rooms of the three-story, 24-room house museum, but my main goal was to view Frank Lloyd Wright’s original San Francisco office, now relocated to its permanent home at the Hagen in Erie.

“The only other site the office had been exhibited was the Carnegie Museum of Art in Pittsburgh,” Pifer said. “There, visitors were only permitted to view the office.”

At the Hagen, people can actually step into the three separate sections, exact replicas of the architect’s office, detailed to include window coverings that duplicate what Wright would have seen outside from his office.

For a near opposite experience, I headed over to Waldameer Park, rated the 6th best-valued amusement park in the country by Consumers Digest and the tenth oldest in the nation.

I soaked in the park’s old-time charms, its Midway games, traditional foods, two world-class dark rides and wooden coasters. Waldameer’s Ravine Flyer II was voted the world’s 9th best wooden coaster and the Comet, one of only 20 remaining Coaster Classics in the US, gives riders a taste of a 45-degree hill and 1,400-feet of winding track.

If you need a place to cool off, Water World next door has more than 25 water slides and has a TripAdvisor rating of the 9th best water park in the nation.    Peninsula Drive, Erie. 814-838-3591 or www.waldameer.com.

Even before checking in at the Hampton Inn Erie Bayfront, 130 E. Front St., the city’s Bicentennial Tower lured me in by its imposing presence a few blocks away. Located at the foot of a long pier lined with at least a dozen charter fishing boats, the 200-foot-tall tower was built to commemorate the city’s 1996 bicentennial.

An elevator whisks you to the top where you can step out onto an observational platform with a 360-degree view of the surroundings. Erie proper spreads out below your feet at the south end, Presque Isle State Park is to your east, while Canada, 27 miles north, can be seen on cloudless days.

Dinner that evening at Oliver’s Rooftop Restaurant gave me another look at the city by night from the Hampton Inn’s 8th floor. The upscale yet casual restaurant opens some of its north and west facing glass windows, weather permitting, giving patrons a chance for an awesome photo shoot. 814-920-9666 or www.oliversrooftop.com.

Early the next day, my first stop was the Erie Maritime Museum, just a block away from the hotel. There, I met up with Linda Bolla, curator and historian, who claims never to have finished college but is one I’d put up against many of the history Ph.Ds. I’ve met over the years. For what seemed like the quickest hour ever, Bolla held me captive by her knowledge of Erie’s maritime history, boat building and fishing enterprises and the role Erie played during the War of 1812.

“Six of the ships that made up the American flotilla during the Battle of Put-in-Bay were made in Erie,” Bolla explained. “Under the command of Commodore Oliver Perry, the Americans were able to defeat the British and take control of the lake.”

For visitors, museum exhibits begin in the lobby of the massive building that once served as the Front Street electric generating station. Inside, the museum has a wide range of interactive displays which can be explored with or without the guidance of a docent.

Highlights include part of the hull of the US Michigan, the navy’s first iron hulled warship, and a reconstruction of the midship section of USS Lawrence with mast, spars and rigging.

The museum centerpiece is a reconstruction of the brig Niagara, an active sailing ship docked at the museum available for touring when in port.

Those who might like to experience what it’s like to sail on an 1893 ship, the Lettie G. Howard, believed to be the last surviving example of a Fredonia fishing schooner, sets sail afternoons and evenings with morning sails on weekends, daily through September. Those onboard can actually help raise and lower the sails and learn a lot about seafaring and its lore from the professional crew.

More in the way of tall ships comes to Erie from August 25 – 28 when a parade of ten ships enters Presque Isle Harbor, then docks for public touring near the Bayfront Convention Center, the foot of State Street and the Maritime Museum. During Tall Ships Erie, as the event is called, the Niagara and Lettie G. Howard will also offer sailing tours of the bay. 833-365-7245 or sailfnl.org.

You can further explore Erie’s lake side adventures by driving along some of the 13 miles of paved roads that traverse Presque Isle State Park, a 3,200-acre peninsula that arcs out into the lake. The ever-growing, ever-changing sand spit is home to 13 surf-swept public beaches and offers hiking, biking and, thanks to its 320 species of avians, ranks as the best place in the state for bird watching.

Just before the park entrance, Sara’s Diner, with its brilliant color scheme, is very popular, largely for its reputation of serving great hamburgers and made-in-Erie-Smith brand hot dogs and foot longs. I can vouch for the burgers and kielbasi sandwich, piled with sautéed onions and peppers, kraut and mustard. I must try the foot long on my next visit north.

Sara’s is also famous for its hand-squeezed lemonade and orange/vanilla twists. 25 Peninsula Dr. 814-833-1957 or www.saraandsallys.com.

Points of interest on Presque Isle include the 101-foot-tall Perry Monument, located at the east end of the peninsula near Misery Bay, and two of the city’s three lighthouses, Presque Isle Lighthouse and North Pier Light. Erie Land Light sits on a high bluff in town on aptly named Lighthouse Street.

Dedicated in 1925 to Commodore Oliver Hazard Perry, the prominent naval squadron leader during the War of 1812, the 101-foot monument on Presque Isle Bay commemorates his victory in the Battle of Lake Erie on Sept. 10, 1813. Placards surround the majestic obelisk and explain the battle and Perry’s role in it. The site also allows for some panoramic views of the city across the bay.

At 301 Peninsula Drive, the Presque Isle Lighthouse, which dates back to 1873, will celebrate it sesquicentennial in 2023. Built at a cost of $15,000, the structure‘s LED light still functions as an aid to navigation on the lake. 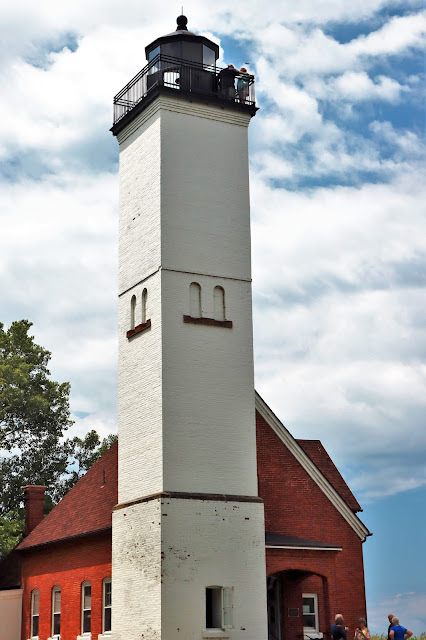 Open seven days a week, from 10 a.m. to 5 p.m. through September, visitors can tour the grounds and walk the 78 steps to the top of the 57-foot-tall red brick tower, then explore the 8-room, lighthouse keeper’s dwelling. Over the years, a total of 8 light keepers, who were paid as much as $520 a month, kept watch over this important guide to lake navigation. 814-833-3604 or www.presqueislelighthouse.org.

For a Place to Dine, Molly Brannigan’s is a lovely Irish pub located in the heart of the city. Leaving her beloved Ireland behind, legend has it that Molly brought just three things with her to Erie – a brogue, a beer and a beautiful hand-hewn bar. Also from Ireland are the restaurant’s woodwork, stained glass lamps and tables and chairs, which nicely compliment the eatery’s black and white checkered tile floor.

The menu lists many items of traditional Irish fare mixed with a nod to American standards. For appetizers, we went for a large bowl of steamed clams and the smoked salmon boxty, served on potato pancakes. Our entree picks, roasted chicken marinated in Guinness and Citrus-glazed Irish Atlantic Salmon, were as tasty as they were unique. Even after all that, I was unable to resist the dessert, a heavenly Black Bottom Creme Brulee made with Chambord.

Beverage master, Kyle Trexler, oversees the bar’s 60 to 70 Irish Whiskeys, including the pricy Bushmill’s 21. Adventurous types might like to try an Irish martini, a mix of Irish whiskey and espresso garnished with a coffee bean or two. For Irish beer lovers, Molly’s has a total of 8 on tap and 7 in bottles.