Tel Aviv-Jaffa: A City of Contrasts 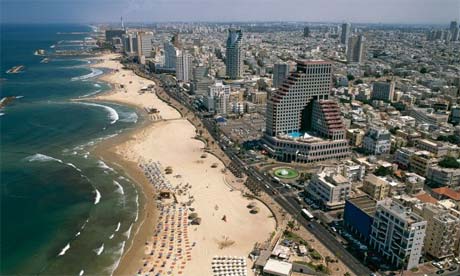 From a seaside hotel in Tel Aviv , a visitor will clearly notice a ruined nightclub on the shore where a suicide bomber had struck in June, 2001. The former building remains abandoned in a stark reminder of the second Infitada that reached into this city on theMediterranean. The names of the 21 victims–mostly teenagers– are inscribed on a stone monument nearby.

Less than a 100 yards away across from the intersection of Ha Yarkon and Herbert Samuel streets is the Hassan Bek Mosque dating from 1915, an exquisite example of Ottoman Islamic architecture in white limestone. A day later, angry Israelis attacked the mosque but it survived and is in use today byJaffa’s Muslims, according to guide Michael Turkenich.

After a lull in inbound travel from this tragedy, says a ministry of tourism representative,  Israel’s economic and cultural heart has bounced back to host visitors from around the world for its beach front, museums, eclectic dining, sight-seeing and shopping.

In fact, a friend asked me, “is it safe?” I felt safer in Tel Aviv than in some parts of theWashington,D.C.area where I make my home.

That said, Tel Aviv’s population has increased to 440,000 since my prior visit in the mid-1990s; its largely residential area known as Ramat Aviv on the classy north side has grown as well. Officially, the city is known as Tel Aviv-Jaffa (or Jafo in Hebrew) to reflect the merger of old Jaffa, reputedly 4000 years old and Tel Aviv, a mere baby founded more than 100 years ago.

Some 90 percent of Tel Aviv is Jewish while most Christians and Moslems reside inJaffa, according to a city government guide. This demographic pattern surprised me and this was my fourth visit to theHoly Land.

English is so widely spoken that I was discouraged from even learning basic expressions in Hebrew except for “shalom” or hello or greetings. In schools, English instruction is required through high school, says our guide.

Tel Aviv-Jaffaseems much larger than its population would suggest and, also to my surprise, it’s half the size ofJerusalem, the capital. For political reasons, 71 foreign embassies are based in Tel Aviv–notJerusalem-fromAlbaniato theVaticanwith consulates represented inJerusalem. “Most countries don’t recognizeJerusalemas the capital ofIsrael,” however, Turkenich reminds me.

Compared to Tel Aviv’s sleek, high-rise profile,Jaffafeels quiteMiddle Eastwith its Ottoman architecture whenTurkeycontrolled what was then known asPalestine. And no one can miss the 1906 Turkish clock tower that isJaffa’s defining landmark. The old quarter has been renovated into an arts center with narrow alleys and flea markets adding to the atmosphere. A typical tour includes the 19th century St. Peter’s Church, archeological excavations and the reconstruction of the Egyptian city gate from the time of Ramses II that contrast the old with the modern.

Despite the seemingly endless beach-front hotels, its retail shops and modern high rise buildings, Tel Aviv still preserves something of its past. The Hatachana train station between Old Jaffa and today’s Tel Aviv is now restored on 49 acres with shops and restaurants. It once operated betweenJaffaandJerusalemsome 45 miles away during the days of theOttoman Empire.

In contrast to some run-down neighborhoods elsewhere in the city and residences on top of disheveled storefronts, the Bauhaus buildings stand apart, thanks to the emigration of German-Jewish architects in the 1930s.

Tel Aviv’s narrow residential streets beg for exploration and the 75 miles of dedicated bike lanes encourage touring by pedal power. You can rent bikes along the waterfront and at other locations at designated stands. One morning I rented one near my hotel, the Dan Panorama, and rode on the beach front promenade until strong headwinds forced a return on a sheltered commercial street. The 9-mile shoreline stretches fromJaffato thePortofTel Avivin Ramat Aviv, which is full of shops, bars, night clubs and restaurants.

For the hardy Israelis, surfing in theMediterraneancontinues throughout the year, our guide explains; even in the middle of winter two kayakers were paddling on theYarkonRiver.

Not unlike other cities, retailers selling the same product cluster together. For example, there is the Florentine district of dress shops in honor of David Florentine, a Jewish Greek who bought the land in the 1920′s.

And no longer isIsraela homogeneous population that I remembered from prior visits–if it ever was. Starting in late 1984, thecountybegamairlifting thousands of Ethiopian Jews –known as Falasha–into the country. And says author Donna Rosenthal of the 2008 book, The Israelis, they are highly observant of Jewish religious customs. Despite complaints of discrimination in housing and employment, according to newspaper articles, they are integrating. I observed them with units of the Israel Defense Forces and on a children’s field trip to Independence House where David Ben-Gurion declared the creation of the Jewish state in 1948. The city is also home to migrant workers and African refugees.

As the country’s cultural center, Tel Aviv is full of museums and the city boasts of 23 including the Tel Aviv Museum of Art and its recently-opened new wing. The Museum of the Jewish People atTelAvivUniversityin the north side was on my to-see list on a prior visit but this time I headed to theNahumGutmanMuseumtucked away on a 130-year old street settled by Jews who had moved fromJaffa. Gutman is considered to be the ultimate painter of Tel Aviv scenes including a fascinating depiction of youngsters pole-vaulting on a beach, post-Independence.

Near our hotel is the Carmel Market overflowing with fresh fruit, vegetables, grocery products, cheese and olive oil. Keep in mind that kosher restaurants and carryouts that serve meat don’t serve any milk products. If you ask for coffee –maybe that black Turkish brew–at a meat-serving restaurant, bring your own Coffee-Mate. European-style coffee shops abound.

For all ofIsrael’s free-wheeling capitalist economy, few American franchises were evident. Some examples included Pizza Hut, Cinnabon, McDonald’s, KFC , and an Office Depot. Then as our guide pointed out there is “Moses Burger” and “Buddha Burger” restaurants and no, I am not making this up. Among other oddities are an orange tree growing nonchalantly and bearing fruit on a grassy strip next to a sidewalk in a residential area and so many felines! They are semi-wild but all look well fed.

In the city’s north side is a 864-acre oasis known both asYarkonParkorJoshuaGardens. This is “the greenlandofTel Aviv–ourCentral Park,” says our guide in probably a well-rehearsed remark to visiting New Yorkers. In the landscaped areas are olive trees with ancient-looking gnarled trunks.

Check out free guided walking tours at tourist information centers for art and architecture of Tel Aviv University, Tel Aviv by night, old Jaffa and Bauhaus. Apps are available for the tours, hotels and restaurants from Visit-tlv.com.

When I arrived late to pick up my rental bike  for the morning ride, I sheepishly explained to the attendant that I had too much night life the evening before. “There’s never too much nightlife in Tel Aviv,” he replies.