Ten Surprise Sites in the City of Brotherly Love 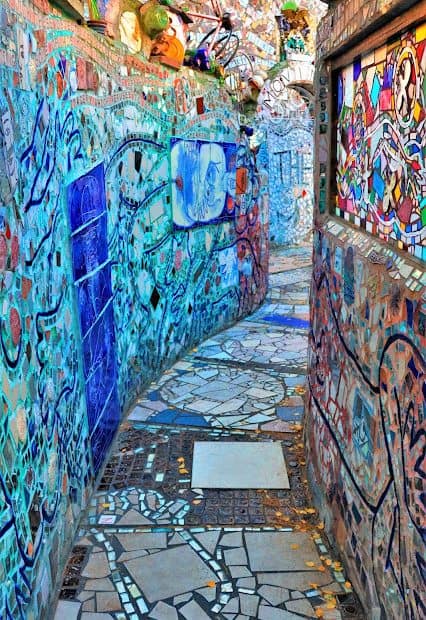 By Dave Zuchowski  All photos by Bill Rockwell

Philadelphia is noted for its wealth of historical and cultural riches. Places like Independence Hall, the Philadelphia Museum of Art and its Rocky Steps and statue, the Liberty Bell, and the Betsy Ross House are some of the city’s top must-see tourist hot spots.

But, as I discovered in an early December visit, there’s a lot more in town to see and do than its most frequented landmarks, many of the sites fascinating and just waiting to be discovered. Here’s a short list of ten surprise sites just under the radar waiting to be explored on your next visit to the birthplace of the nation.

1 Start with a bit of awesomeness by dropping into the Curtis Center, home to Curtis Publishing of Saturday Evening Post and Ladies Home Journal fame. Be dazzled in the lobby by the 15 by 49-foot 1910 Tiffany glass mural, aptly titled “The Dream Garden” at Sixth and Walnut.

With over 100,000 pieces of glass, representing 260 different colors, the Maxfield Parrish-designed mural was the largest in the nation until an even larger one was installed in a bank in Alhambra, California, in 2007. If you have a chance, stroll through the magnificent P.J. Clarke’s restaurant, just to the left of the lobby. It’s gorgeous and is full of interesting nooks and crannies filled with eye-catching artifacts.

2 The Mysterious Whispering Bench. In Philadelphia’s Fairmont Park, the bench at the base of Smith Memorial Arch has some interesting acoustical properties. To experience them, have one person sit at one end and whisper something (the most popular  is “I love you”) into the wall behind. Have a second person sit at the opposite end, and they should be able to hear what the other person is saying loud and clear.

3 Ben Franklin’s Grave. The remains of five signers of the Declaration of Independence, including Ben Franklin, rest in Christ Church Burial Grounds at the corner of 5th and Arch Streets. The two-acre site is the final resting place of 1,400 people, including some of our nation’s earliest leaders. Franklin’s grave lies right along wall by the street, and people have developed the custom of throwing pennies on the slab that covers his remains recalling his adage that “a penny saved is a penny earned.”

Guided tours of the burial grounds are available for a fee as is entrance to the cemetery.

4 Have a taste for the arcane? Then stop in for a look around the Mutter Museum, 19 S. 22nd St., where you’ll find medical curiosities like President Grover Cleveland’s tumor, taken from his jaw, parts of Albert Einstein’s brain and the death cast of Chang and Eng, the original “Siamese Twins,” whose autopsy was performed in the museum.

The museum came about when Philadelphia physician, Thomas Mutter, donated his 1,700-item personal museum of bones, plaster casts, and other pathological artifacts to the College of Physicians of Philadelphia. Since then, the collection has grown to some 20,000 items, including 139 human skulls, the skeleton of a 7-foot, 6-inch tall man and  the “Soap Woman who died of Yellow Fever and was buried in soil with certain chemical properties that turned her into soap.

5 The Wanamaker Organ. Billed as the world’s largest, fully-operational pipe organ, the Wanamaker is installed inside the 5-story Grand Court at Macy’s department store near City Hall.     Through two global pandemics, two world wars, the Great Depression and the Great Recession, the organ has resounded twice daily ever since the store opened in 1911. With all that performing under its belt, the organ is believed to have entertained the largest cumulative audience over its lengthy lifetime.

6 The Magic Gardens. Head on down to 1020 South St. to see an incredible installation of mosaics that covers almost an entire city block. Mosaic artist, Isaiah Zagar, uses cement, bicycle spokes, bottles, ceramic shards, glass, folk art pieces and more to create a colorful landscape that wanders through, over and under indoor galleries and an outdoor labyrinth of visual spectacle.

7 Edgar Allan Poe lived in Philadelphia for about six years (1838-1844) with his wife and mother-in-law, spending his last year to 18 months at a house at 234 N. 7th Street. Now a National Historic Landmark, the house is maintained by the National Park Service and is free to the public.

Outside in the yard, a large statue of a raven honors his most famous work, a poem by the same name. Inside, visitors get to walk through the original 3-story brick home as well as an adjoining house with exhibits that explore Poe and publishing, Philadelphia through Poe’s eyes, and Poe and his family. During his residence in the house, Poe wrote “The Black Cat,” which hauntingly describes the basement you’ll discover at the site.

8 The Museum of Illusions is an experiential space that focuses on how one’s eyes and brain interpret reality. With close to a dozen exhibits and 60 reality-defying experiences, the museum is a perfect spot for selfies, whether it be to snap a shot standing upside down in a café, walking through a stationary tunnel with walls of spinning lights or have your severed head resting on a platter.

Step into the Ames Room and watch how a person grows or shrinks as they walk from one corner to the next and sit in the Buechet Chair and capture on film an optical illusion and how depth perception plays with the mind.

In the Smart Playroom, try you hand at puzzles, brain teasers and other games. Handy placards near each display give a scientific explanation of illusory effects experienced. 401 Market Street.

9 The Shane Confectionery has been selling candy to Philadelphians since 1863, giving it the title to the oldest candy emporium in the U.S. Walk into the long and narrow building and you’ll encounter all sort of sweet goodness enveloped in a Victorian atmosphere.

10 As the crucial center of the original 13 colonies drive for independence, Philadelphia is perfectly fit to serve as the site of the Museum of the American Revolution. The large building holds an expansive collection of art, manuscripts and printed works from the nation’s Revolutionary Period. It also displays a range of objects gathered from and pertaining to the Revolutionary War, including British, French and American weapons used in battle and personal diaries written in camp.

Visitors will find that the galleries are organized chronologically to take them on a journey from the beginning of the conflict in the 1760s through the creation of our nation and beyond. 101 S. Third St.

For a Place to Stay, The Wyndham Philadelphia Historic District is within easy walking distance to several of the sites mentioned in the article. The Wyndham offers more than 360 beautifully appointed rooms and four spacious suites featuring plush bedding and upscale amenities, including free Wi-Fi, large flat-screen TVs, in-room coffee, spacious work desks with plug-ins, and luxury bath amenities.

Guests can enjoy the complimentary fitness center, relax at the hotel’s seasonal rooftop pool and indulge in a meal fit for a founding father at the on-site Coin’s Restaurant & Pub.  400 Arch Street Phone 215-923-8660.

Square 1682 is housed in the Kimpton Palomar Hotel at 121 S. 17th St. and features a modern American menu. Philly’s first LEED-certified green restaurant takes pride in its sustainability measures, from the in-house herb garden, to the locally-sourced produce to the energy conscious engineering of the building design. Phone 215-563-5008.

Royal Boucherie, 52 S. 2nd St., is located on a busy side street in Old Town. Long, dark, lively, cozy and romantic, the restaurant is known for its charcuterie, raw bar staples like oysters, clams, lobster and scallops, French-leaning menu and notable wine selections. Suggested dishes include the escargot and cassoulet. Phone 267-606-6313.