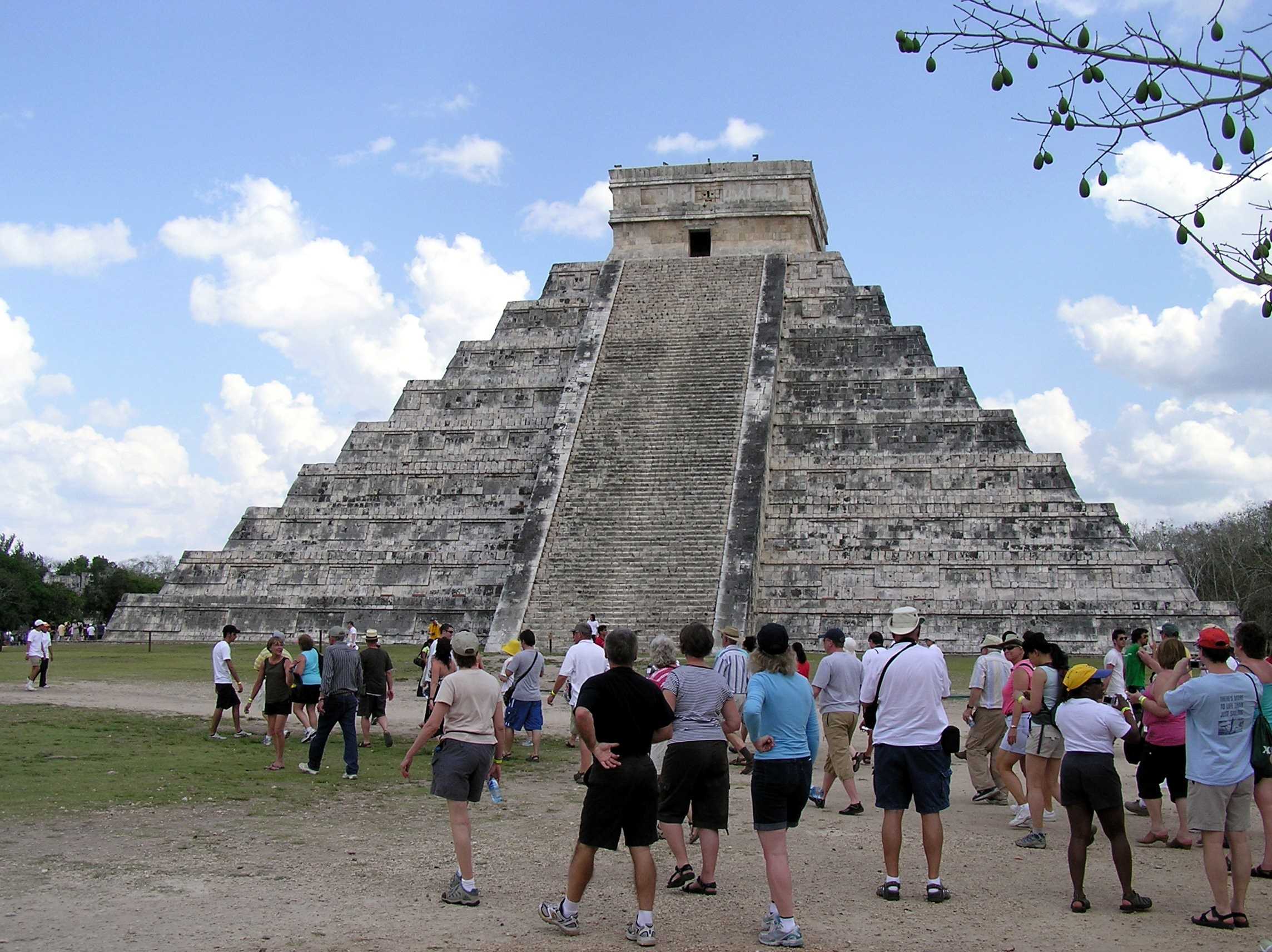 The Kukulkan Pyramid in Chichen Itza

Story and Photos by Bud Cole

If you travel to the Mexican vacation areas of Cozumel or Cancun, you will likely hear someone mention Chichen Itza or what the local English speaking people and tourists more easily call Chicken Pizza. The English translation is “at the mouth of the well of Itza.” The Itza are the Guatemalan ethnic Mayan people who speak the Itza language. Even if you have no interest in its history the trip to view the most famous and most spectacular Mayan ruins will be well worth your time.

You will be amazed at what these people were able to achieve without the advantage of modern education and technology. Chichen Itza is one of the number one archeological attractions in Mexico and the number one on the Yucatan Peninsula. An estimated 1.2 million visitors tour the city each year. It is surpassed only by the Egyptian Pyramids.

The pre-Columbian city presents an assortment of architechtural styles much like those built in Central Mexico and the northern Maya lowlands. These similarities were thought to be patterned after the central and northern lowland architecture as a result of direct migration, conquest or both. Today most experts believe the non-Mayan and mixed architectural styles are due to cultural diffusion of the different native populations.

The ruins of Chichen Itza are managed and maintained by Mexico’s National Institute of Anthropology and History. Oddly, the land under the buildings was privately owned until the state of Yucatan bought the land in March 2010. The city was the principal metropolis of the Yucatan and Mayan cultures.

Chichen Itza is divided into two major areas: Chichen Viejo (old Chichen) and Chichen Nuevo (new Chichen). Chichen Viejo, founded in about 400 AD by the Mayans was governed by priests. It is located in the south of Las Mojas and is only open to archeologists. Chichen Nuevo was established about 850 AD. It is characterized by many images of Kukulkan, the Mayan snake deity. 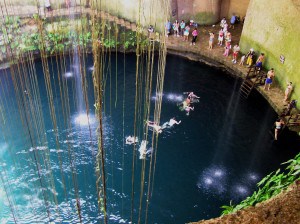 The Cenote Yaxunah near Chichen Itza. It supplied year-round fresh water for the city’s people.

Mexico’s northern peninsula is very arid with its major rivers all running underground. These underground rivers formed very large subterranean caverns and natural sinkholes, called cenotes. Two very large sinkholes are near Chichen Itza. The cenotes supplied a plentiful year round source of water, thus making the area very attractive to settlement. As with most settlements across the world, a safe readily available source of water was extremely important to the development of an area. The Mayans called the sinkholes dzonot. The dzonot were considered sacred places by the Mayas and were thought to represent entrances to the underworld. Mayan hieroglyphics define dzonot as “deep and abysmal.” 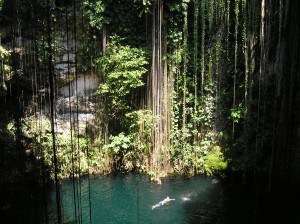 Most trips to Chichen Itza stop at Cenote Yaxunah. Visitors can walk down the series of stone stairs to the water’s edge experiencing a drop of 10 to 15 degrees Fahrenheit from top to bottom. The water is very clear. Swimming and picnicking are allowed. A refreshing dip is a real treat when compared to the dry hot climate of the surrounding area. Long, hanging tropical vines dangle from the ledges near the top and lush plants cling to the walls adding to the mystique of the enormous natural well. The government estimates the area to contain over 6000 cenotes, but only 2400 are registered. 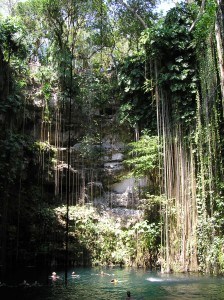 The Kukulkan Pyramid in Chichen Itza, known as “El Castillo” (the castle) is one of the new Seven Wonders of the World elected to the list along with the following six other sites on July 7, 2007, (7/7/07). It is exactly 24 meters high (almost 80 feet). It joins the Great Wall of China; Petra, Jordan; Christ Redeemer statue, Brazil; Machu Picchu, Peru; The Roman Coliseum, Italy; and the Taj Mahal, India. Visitors are no longer allowed to climb the steep steps to the upper Kukulkan Pyramid platform. 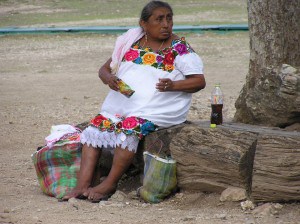 One of the native peddlers.

You enter and exit the city through the gift shop, a technique often used by tourist areas to sell souvenirs. As you exit the gift shop you soon hear the following phrase with a Spanish/Mayan accent repeated many times, “Only one dollar, only one dollar.” Local native people try to sell their wares while you walk to the buildings of Chichen Itza. Small stands line the walkway and little old ladies with sun-wrinkled skin adorned in bright colored dresses follow you until another one takes her place ever hopeful that you to buy their colorful handkerchiefs and scarves.

Soon the Kukulkan Pyramid is visible in the distance. The biggest crowd of tourist surrounds the site as a guide gives information about the size, the number of steps and its significance to the Mayan Civilization. The design is thought to relate to the Mayan Calendar. There are four flat platforms each rising 91 stone steps above the lower one. There are 365 total steps including the steps to the top; one for each day of the year. Visitors no longer permitted to hike the steps to the summit due to the wear and tear of the stone construction. 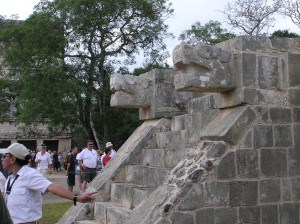 Two of the many carved serpent heads.

Twice a year on the day of the spring and fall equinoxes a shadow falls on the pyramid in the shape of a serpent. The shadow is formed by a nearby serpent carving. When the sun begins to set the shadowing serpent descends the steps joining a carved serpent head at the base of the great staircase. 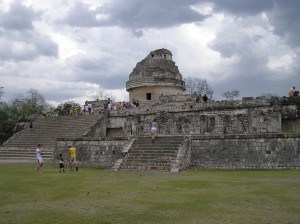 Visitors are free to roam around the city at their leisure. Another popular site where visitors can still climb to the upper flat level to get a close-up and personal look is the Observatory or el Carocal, meaning snail in Spanish. It derives its name from the interior spiral staircase. The building is topped by a 40 feet high round tower or dome. The windows in the Carocal face the cardinal (north, east, south and west) and sub-cardinal (in between the cardinal) directions. It is believed that the windows were used to track celestial bodies such as Venus, the Pleiades, the sun and the moon. The Maya’s astronomical skills were so advanced that they could predict solar eclipses. 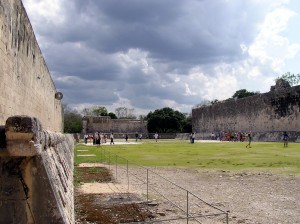 The largest ball court in the Americas. Notice the hoop like goal on the left wall.

The ball court is the largest known in the Americas. It measures 554 feet long and 231 feet wide. Players tried to kick a 12 pound ball through raised stone rings set high on the court’s walls. Each player must have played his heart out because losers were often put to death. 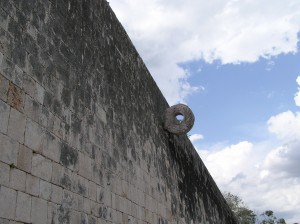 The Mayan ball players kicked a 12 pound ball through this ring or hoop to score a goal.

Be sure to remember what time you are due back at your bus or van. You don’t want to be hitchhiking back from Chichen Itza to the resort beaches.