The Arabella: Cruising a Sailors Paradise 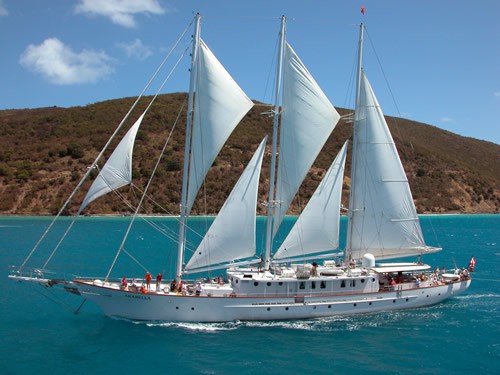 By Jeff and Stephanie Sylva

As the captain gave orders to weigh anchor, we ordered some tropical drinks and slipped into the on-deck hot tub. Cruising out of White Bay on Jost Van Dyke in the British Virgin Islands for the short jaunt to Great Harbor and our evening anchorage, we basked in the glory of sailing on our 160-foot yacht as the palm trees lining the beach began to fade into the distance. This was just one of many special moments that we experienced during our week of sailing in the Caribbean. We had booked a week aboard Classic Cruises’ 160 foot sailing yacht Arabella for a cruise of the sailors’ paradise, the British Virgin Islands. What made this cruise special was the perfect blend of luxury cruising – minus the crowds – and the intimacy of a sailing charter. If you have ever thought that a sailing charter in the Caribbean would be a wonderful way to experience the beauty of these tropical islands up close, but were not confident enough to charter your own ship, this is the perfect alternative. A sailing cruise aboard the Arabella is also a great alternative to the massive cruise ships. The cuisine rivals any meals on the cruise liners, and the relaxing atmosphere and intimacy of the ship and its ports of call are far better than the hustle and bustle of the cruise ships.

In addition to the BVI itinerary, the Arabella has winter/spring cruises to the Spanish Virgin Islands and the French West Indies of Anguilla, St. Martin, St. Barts, Nevis and St. Kitts. And new this year, the Arabella will be sailing a Turks & Caicos itinerary with stops in Grand Turk, Salt Cay, South Caicos, Middle Caicos, Caicos Cay and Providenciales. From June through September the ship sails to various spots in southern New England as well as a Maine itinerary.

All meals, except one night’s dinner when we were on our own, are included in the tariff (prices range from $1395 per person to $2395 per person depending on choice of cabin). Four of the dinners are ashore at either a world class resort like Caneel Bay on St. John or the Bitter End Yacht Club on Virgin Gorda, or at a restaurant with a lot of local flavor like Foxy’s on Jost Van Dyke or the Pirate’s Bight on Norman Island. Thursday’s dinner was a barbecue aboard ship; and like all of the breakfasts, lunches and 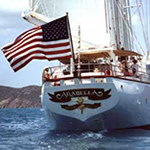 snacks prepared by the chef, the food was outstanding.

Before going ashore for dinner on our first night all the passengers and crew met for a &quotwelcome reception,” a perfect chance to meet everyone with whom we would be spending the next six glorious days. The ship can accommodate up to 40 passengers. We numbered 18, and this small number made it easy for all to become well acquainted. By the end of the week we were like one big family, finding it difficult to say goodbye.

Each morning we got under way about 8:00 AM and enjoyed a scrumptious breakfast buffet, which passengers can enjoy either in the parlor or outside in the spacious covered cockpit. There couldn’t be a more relaxing place to enjoy the morning’s last cup of coffee than on the aft deck watching the Arabella’s sails billow with wind as we sailed from island to island.

Because of the nearly-continuous winds, the close proximity of the many islands, and the well-protected waters of Sir Francis Drake Passage, the BVI’s are a Mecca for sailors. If you’re looking for a sailing cruise that will get you experience in hoisting sails and setting the jibs, the Arabella probably isn’t for you, as insurance regulations don’t allow for passengers to work on the upper deck. However, the sailing experience was just as enjoyable as sailing your own boat.

The Arabella, especially when it is under sail, presents a beautiful picture – a true classic, three-masted schooner. Yet this classic elegance shouldn’t belie the modern conveniences of this ship. Each of the 20 cabins offers a private bath and shower, individual climate control, satellite TV and telephone. It seemed that wherever we sailed, heads were turning to watch this beautiful vessel under sail. Even Jimmy Buffet’s seaplane, as it whisked the singer from his yacht one day in North Sound in Virgin Gorda, circled us a second time to get a closer view.

A typical port of call for the Arabella was a beautiful beach or a great spot for snorkeling or kayaking. Or, as some of our fellow passengers did, one could just find a comfortable place on deck or a quiet spot under a palm tree on the beach and bask in the glow of the warm Caribbean sun with a good book. Every one of our stops was at a pristine, tropical beach complete with palm trees or at a great snorkeling spot. Some of the places included the world famous Baths of Virgin Gorda, The Caves of Norman Island, or simply a small uninhabited island like Sandy’s Spit, which provided some great picture taking.

One of our favorite spots was White Bay on Jost Van Dyke. This crescent-shaped beach of white sand and palm trees is a big attraction for the sailing crowd. Nestled among the palm trees are a number of beach shack bars, cafes, and souvenir shops, the most popular of which is the original Soggy Dollar Bar (voted &quotBest Beach Bar in the Caribbean” by readers of Caribbean Travel & Life), best known for inventing the famous painkiller cocktail. The bar is a little open-sided shack with some tables and chairs in the sand and a couple of hammocks strung between palm trees. It is this simplicity together with the picturesque scenery that gives all of these beach bars and cafes such appeal. Other bars with similar motif along the beach include One World and 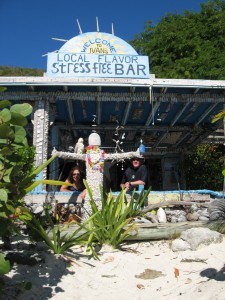 It was during the activity-filled days that we saw how accommodating the 8-person crew could be. Whether it was taking passengers in the tender to a great spot for snorkeling, outfitting the group for kayaking, or serving drinks to those warming up in the hot tub, the crew was especially attentive. There was not one passenger who couldn’t say enough about the friendliness and attentiveness of the crew.

Each night a couple of the crew manned the tender and provided transportation ashore for dinner and some of the local nightlife. One of the night spots when we were anchored at Norman Island was Willy T’s. It’s a bar on an old frigate anchored at The Bight. The plethora of skiffs tied to this floating bar was proof of its popularity among the sailing crowd. And it was a bit of a raucous crowd at that – probably in keeping with the local history of The Bight and its attraction to the pirates that once sailed these waters. Each night’s stop afforded some sort of entertainment, whether it was a local band, DJ, or island favorite Michael Beans, the Pirate Singer.

Our final night of this dream cruise of the BVI’s was spent at what has become a landmark on Jost Van Dyke and the BVI’s – Foxy’s. What was once nothing more than a bar on the beach – literally, just the bar and a refrigerator, not even a roof over it – has become a thriving restaurant serving a barbeque buffet and a busy souvenir shop. After dinner a group of us spent our last night together dancing to the reggae band at Foxy’s, a perfect way to wrap up our sailing adventure in true tropical style. Saturday morning we were under way early to get to Cruz Bay for U.S. Customs. We all looked sad as we exchanged e-mail addresses, realizing that we were headed home. The crew simply laughed at someone’s suggestion that we mutiny and take the Arabella back to the BVI’s for another week. They probably have heard that one many times before.

We know it would be hard to duplicate such an enjoyable trip as this, but a number of the passengers had sailed on the Arabella before, some as many as seven times, and said they enjoyed each and every trip. We hope to enjoy the relaxing and luxurious beauty of this classic schooner again on one of its other cruises.

* For more information on the Arabella and its cruises call 1-800-395-1343 or visit www.cruisearabella.com.
* Getting there: American Airlines has a direct flight from JFK to St. Thomas. From the airport you need to take a taxi to Red Hook Harbor, about $14 per person. A valid passport is necessary to enter the BVI’s. On the return day plan for some shopping in the duty-free zone of Charlotte Amalie. Kim, the Arabella’s dock manager, arranged for taxi driver, Maurice, to take us to town, keep our bags and pick us up and get us to the airport in time for our flight. Cost was $20 per person.
* Excursions: On the free day in North Sound, the crew can arrange for a diving trip or a trip to Anegada, a small island of beautiful beaches.

Check it out in advance: