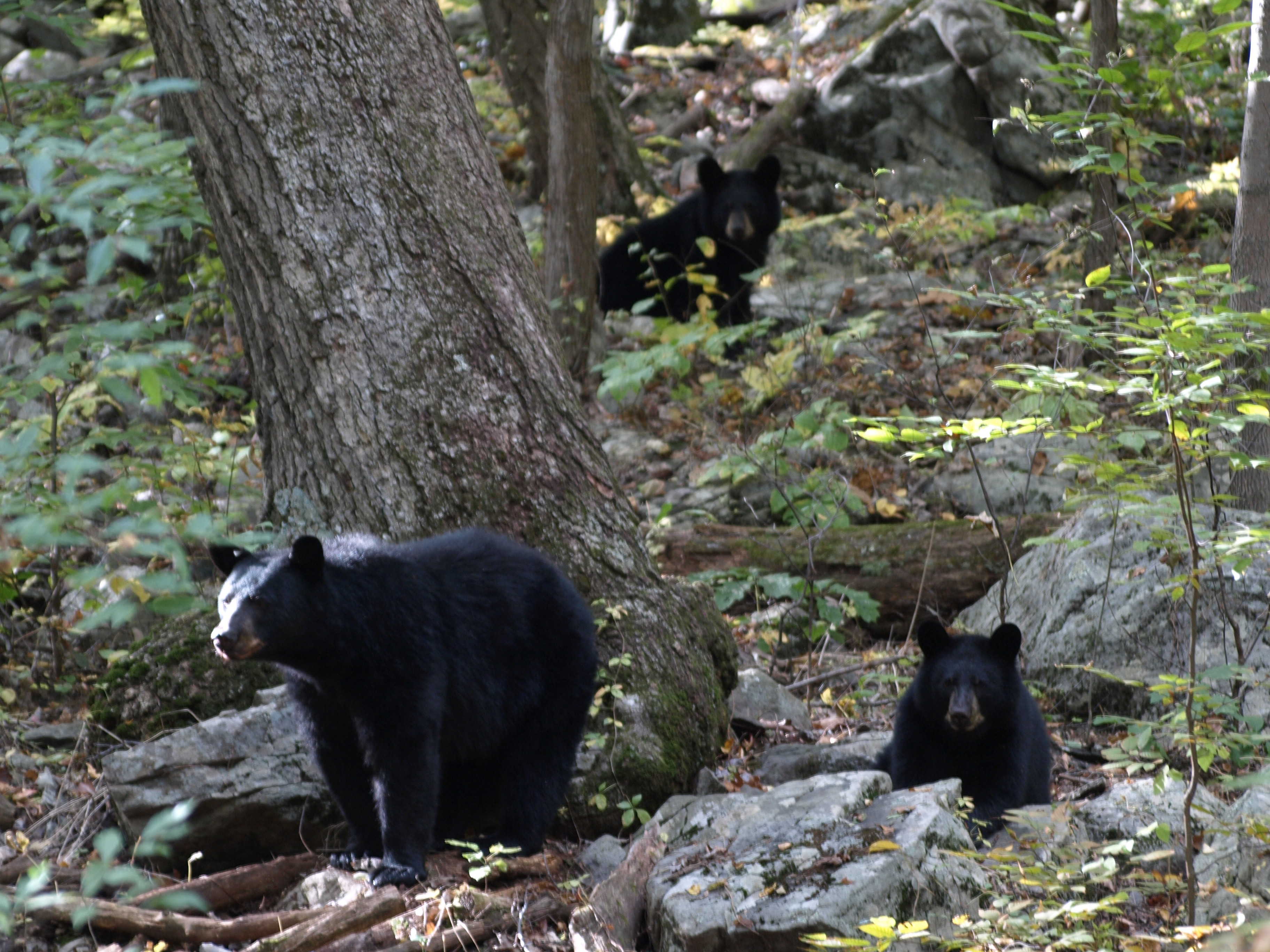 Story and photos by Bud Cole

What are your plans for March 2012? Do you remember what you did during the month of March last year? Well, every March the Pennsylvania Game Commission’s black bear biologists enter Penn’s Woods to check on the mother black bears and their cubs. Radio collars were attached to about 65 pregnant females trapped during the fall months. They were collared as part of an on going research program. The radio signals emitted from the collars enable the Commission personnel to locate the females in their dens. Most cubs are born about January fifteenth while the mother is resting in her den. Black bear litters vary from one to six cubs. The average is three cubs per litter. Note: It is as likely to find a den with three or four cubs as a den with one cub.

My wife Bev and I celebrated my March birthday observing the biologists at work in the Keystone State, more locally known as Lord’s Valley in Pike County. The previous night after finishing every last morsel of our entrees and desserts in the Sterling Inn’s, dining room in Sterling, PA we quickly assembled in the Inn’s meeting room to hear Mark Ternent, Pennsylvania Game Commission black bear biologist, report on the most up to date information on Pennsylvania’s healthy and stable black bear population.

Ternent is the director of the bear research program for Pennsylvania. We listened intently as he explained the three reasons for going to the bear dens. “Number one is to monitor reproduction, number two is to evaluate the general health of the mother and cubs and number three is to take care of radio collar maintenance,” Ternent pointed out to the mixed group of outdoor writers, spouses and interested friends. Ternent further explained that each radio collar includes a decomposable splice section which lasts about one year. In this way the collar can fall free from the bear if the radio transmitter fails. The spliced section is replaced each year so that these rather expensive radio collars will fall off when necessary, but not fall off prematurely.

We were amazed to learn that pregnant females have not eaten, drunk any liquids or excreted any wastes since entering the dens in November. It’s difficult to comprehend that these same females had given birth to and continue to nurse their cubs relying totally on the stored fat from their fall foraging.

Black bears do not lose much weight during this dormant time period while utilizing the stored fats. “The major weight loss begins in spring as the bears leave their dens and their metabolic rate increases,” Ternent said. “Black bears are omnivorous – they eat plant and animal matter. One of the major sources of food in late winter and early spring is skunk cabbage. The early growing skunk cabbage is emerging as the bears leave their dens. Bears also rely on sedges, grasses, clover, tree buds, catkins and old acorns during the spring season,” he explained.

Social insects, like ants and bees, provide protein for the bears in early summer. In the late summer bears feast on apples, corn, blueberries, elderberries, blackberries and pokeberries. This sounds like my kind of menu other than the poisonous pokeberries. Fall finds them eating hard mast crops like acorns and beechnuts. They often feed up to twenty hours a day consuming up to 20,000 calories as winter approaches. “A male bear, the boar, reaches a mature weight of about 500 pounds at nine years of age. Females, the sows, reach a mature body weight of about 250 pounds when they are 3 to 5 years old and do not usually go above that weight. Sows spend most of their adult lives either pregnant or rearing their cubs,” Ternent related. (A 35 year old sow was checked at one of the bear checking stations during last year’s bear hunting season.)

Breeding
One of the most remarkable facts garnered during the research on our Keystone State black bears is that female bears breed when they are 2 ½ years old and continue to breed every other year. This breeding age is younger than in any other state. They give birth to one or two litters before females in the western states and Canada have their first litter. This research accounts for why we have such a large black bear population Ternent pointed out.

Pennsylvania black bears mate in June and July. The peak breeding time correlates with our independence celebration on July 4th. The egg becomes dormant following fertilization. Known as delayed implantation, the fertilized egg does not implant on the uterine wall until late October or early November when it will begin to mature. This delayed implantation allows for the future black bear mother to naturally abort her pregnancy if she is in poor condition due to lack of food or other unforeseen problems. Male black bears do not help raise the young.

Newborn cubs are very underdeveloped. They are blind, toothless and covered with fine hair. The cubs weighing about 8 ounces, about the size of a soda can, are born in the den around the second week in January. “Black bear milk has the highest fat content – about 30% — of all terrestrial mammals,” Ternent said. “Cubs mature rapidly, growing from 8 ounces to over 5 pounds in 8 weeks and to approximately 80 pounds by November (11 months old.) If humans followed this same growth pattern a human baby would weigh 1400 pounds at 11 months of age,” Ternent added. Can you imagine the food bill resulting from feeding a 1400 pound infant?

The next morning found us car pooling from the Sterling Inn to the den site within a caravan of vehicles. Traveling east, the sun seemed to lead the way to the mother bear’s nursery. As we anxiously stood by waiting to hike in to the den site the biologists were busy at the den tranquilizing Momma Bear to be sure that the public participants would have a safe encounter with our state’s largest mammal.

When the mother was safely sedated to the point that she could not move we cautiously approached the den site. The den was located under the outer edge of an overhanging rock. Several branches covered the opening. The biologists had pulled her free from the den to record her vital signs and weight. Two cubs were removed from the den shortly after we arrived. The two male cubs were estimated to be about 8 weeks old. They were weighed and tagged while she was asleep. One weighed 7 pounds and the other one weighed 7.2 pounds. They had no detectable odor and showed no fear as they were handled by the biologist. The highlight of the adventure was when we were allowed to hold the cubs in our arms while the biologists continued recording data from the mother. The cubs showed no desire to try to get away. It was like holding a docile, but hairy 7 pound baby with long fingernails and pointy teeth. 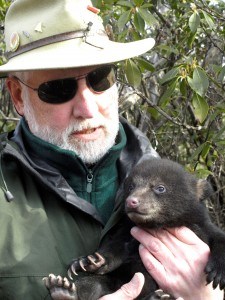 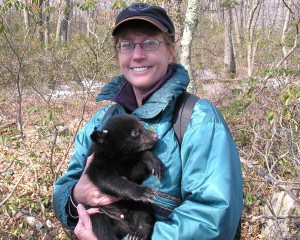 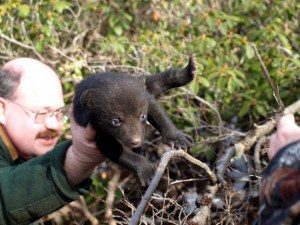 Mother and Cubs
The mother weighed 178 pounds. She was checked for weight loss and general health conditions. Her head was covered to protect her eyes from dirt and the sun. Previous data showed that this particular sow was a yearling when she was first trapped and tagged in 2001. Biologists determined that this would have been her third litter of cubs, but previous data indicated that she lost her second litter to unknown circumstances. She was carefully placed back in the den with her cubs by her side when the research was completed.

The cubs spend about 18 months with their mom. They watch and mimic her every move. This is how they learn what foods are good to eat, how to climb trees and in due course, gain the knowledge needed to become mature black bears. The mother and cubs den together in fall. They spend their second spring with mom and then disperse when Mamma Bear is ready to breed during June and July.

Bear activity, like with many other mammals, occurs at dawn and dusk along with some midday activity. Under normal circumstances there is very little nocturnal movement in areas away from humans. Nocturnal activity increases when the bears live near civilization and are disturbed by people.

Management
How is a bear population that is four times larger than twenty years ago being managed? And are there any benefits in maintaining a large population? A very positive result of a large population is found in wildlife viewing. People like to see large mammals. Bears, deer and elk are on the top of most wildlife viewers’ lists. Possibilities of seeing a bear increase if there is a larger bear population. The likelihood of harvesting a bear during the hunting season has also increased under the current Commission management plan. Success rates for bear hunters are about three percent. The length of the hunting season is adjusted in certain areas of the state where bear numbers have grown too large or have decreased in size.

Bear and Human Conflicts
One negative result of a large bear population is an increase in bear-human conflicts. Bears adjust well to living near people and quickly figure out how to obtain food from garbage cans and other food sources.

Hunting continues to be the best way to regulate and manage the bear population Ternent stressed. “Our current black bear population is estimated to be around 15,000. About 500 to 600 bears are trapped and tagged each year as a part of the ongoing research. The number of tagged bears taken during the hunting season is compared to the total number of bears tagged during the previous year. This ratio is used to estimate the overall bear population in the state.”

Changing Human Behavior
A key factor, when it comes to bear problems, is the need to change human behavior. In order to reduce conflicts with bears we must remove the attractants that invite bears to become a nuisance in the first place. Placing garbage or other food substances where the bears can easily find them is an open invitation to problems. Bears will return again and again to locations where food is easily obtained. The best way to avoid these problems is to remove all food sources such as pet foods, suet, bird seed and other temptations from outdoor locations.

You might encounter a black bear while hiking or camping in our beautiful Penn’s Woods. Bear attacks are very rare especially with how many times people and bears meet. In most cases the bear will run off. If it doesn’t run away and stands its ground, be sure to remain calm. Back away slowly and do not make eye contact – a bear may interpret eye contact as a threat. Give the bear plenty of room to escape. Do not climb a tree. Mother bears usually chase their cubs up a tree when they detect danger and she might think you are climbing a tree to harm her cubs. Wave your arms and make lots of noise if a bear decides to charge. Fight back with a stick as a last resort if you are attacked. For the most part our black bears are shy and not aggressive. 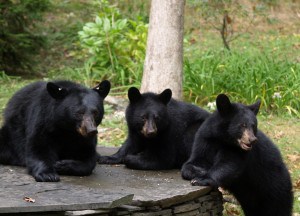 Oh, and by the way, it is illegal to feed bears in Pennsylvania!