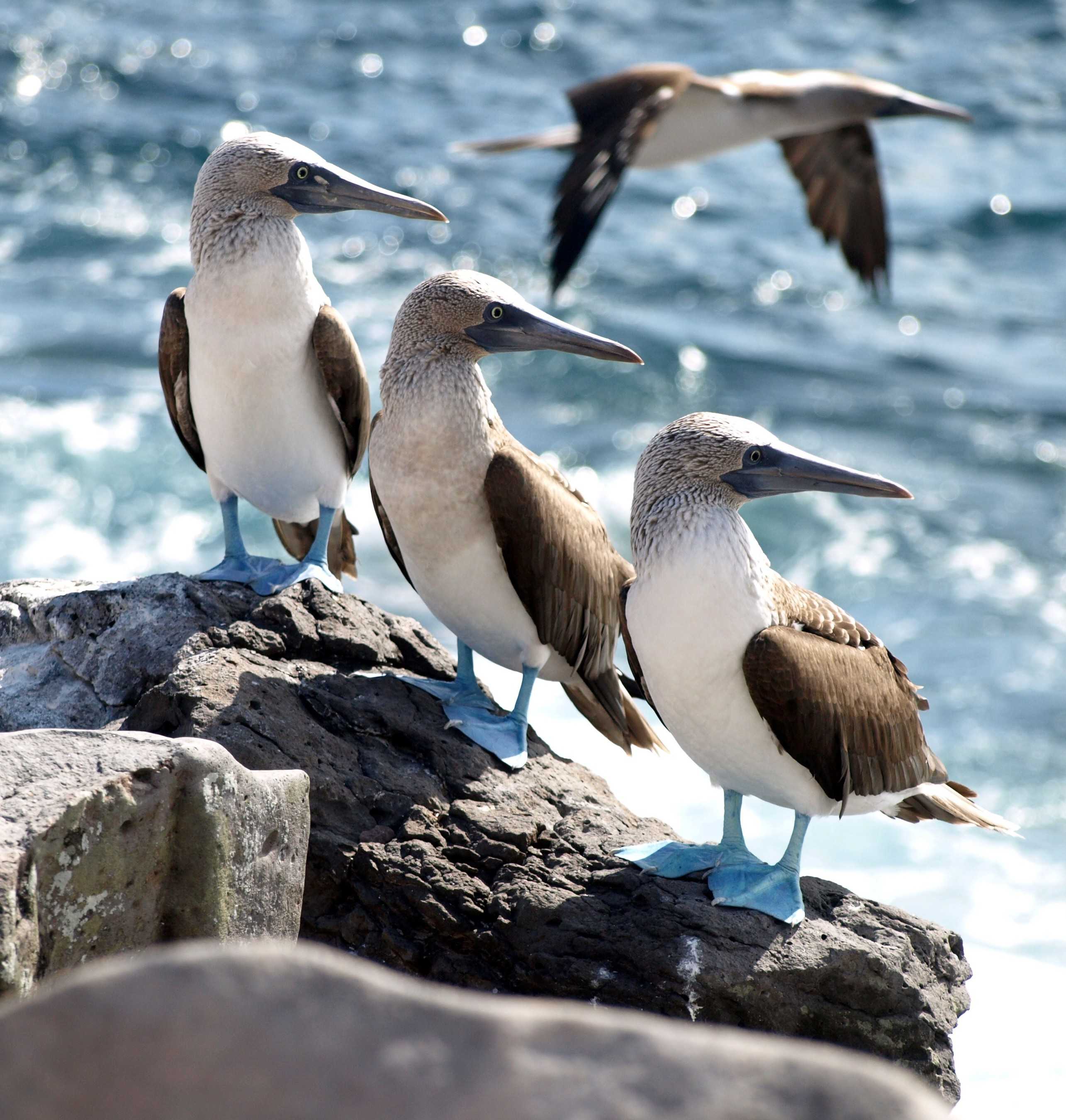 Whenever one ventures off on a travel vacation the expectations for fun and adventure run very high, but how often are the results much greater than anticipated? That is exactly what we experienced in the Galapagos Islands; a volcanically formed archipelago located six hundred miles west of Ecuador where most of the unusual flora and fauna are usually within arms reach. And many of them are endemic – the only place in the world where they are found. 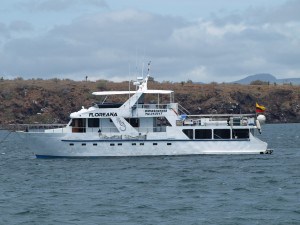 Our motor yacht, the Floreana.

My wife Bev and I spent 8 days and 7 nights in the Galapagos Islands aboard the Yacht, Floreana, a 75 foot vessel that accommodates 16 passengers, a naturalist guide and a crew of 6.Our first taste of the islands, other than Baltra where we landed, occurred two hours after our plane touched down when we motored to the rather flat arid North Seymour Island where we boarded the yacht’s two dinghies, called pongas, to explore the island. After a safe dry landing – the ponga driver nudges the bow (front) of the ponga into the rocks or docking area – we all stepped ashore.Sea lions, lying on the makeshift steps where we made our dry landing, ignored us as we stepped ashore and carefully walked past them. We followed our guide Christian along the marked hiking trail. About five minutes into the hike we spotted our first land iguana basking in the sun at the edge of the trail.

We continued down the sandy trail passing many more sea lions. Blue-footed boobies colonies were filled with strutting males going through their courting rituals. The males stick out their necks, throw out their wings and strut about lifting one leg at a time almost in slow motion.

Not far from the blue-footed booby colony we found a magnificent frigate bird colony. The males spend up to eight days inflating their throat sacs as part of their mating ritual. The inflated pouches are used to attract a mate. Many of the males were found sitting in and among the island’s white-bark bursera trees hoping to catch a female’s eye. Camera shutters were clicking at a brisk pace.

The sun was about to set as we headed back to the rocky shoreline. Sea lions were playing in the surf and marine iguanas were lying on the rough rock surfaces. A few of the marine iguanas were lying on the rocks in pairs as if they had brought a date to watch the sunset. It was not long before we witnessed our first island sunset. We returned to the Floreana for our first of many delicious meals.

Early the next morning we gathered on the deck before boarding the pongas to explore the northern section of Santa Cruz, the most populous of the islands. It is also the second largest of the islands. Due to its size and location it supports all the vegetation zones found in the archipelagoes. 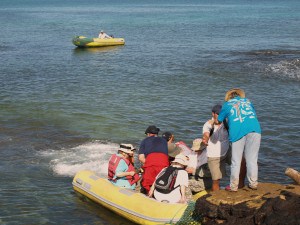 We made another dry landing where we hiked to Dragon Hill to observe a beautiful view of the bay. The flora varied from prickly pear cacti to the palo santo, or bursera – a tree with white bark. The fauna included Darwin’s finches, Galapagos mockingbirds, marine iguanas, sea lions and a colony of land iguanas which have been reintroduced to the island by the Charles Darwin Center. After looping back to the beginning of the trail we headed back to the Floreana for breakfast.Following breakfast and about 90 minutes of snorkeling we returned to the vessel for lunch. Our busy schedule of hiking, snorkeling and other island activities made it appear that the space between meals was much shorter than at home. The action packed schedule of activities stimulated our appetites. The good news was we worked off the calories shortly after consuming them. After lunch we took a ponga ride along the coast of the island observing land and marine iguanas, spotted eagle rays, golden rays, mullet and white tipped reef sharks. 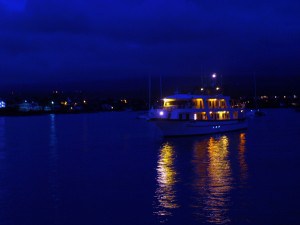 A night in the Puerto Ayora harbor.

Before we knew it we were back onboard motoring toward the southern end of the island where Puerto Ayora, a commercial and tourist center is located. We ate dinner shortly after anchoring in the harbor and watched the sun set behind the town. Immediately after dinner we boarded the pongas and were off to see the sights in Puerto Ayora. The third morning dawned without a cloud in the sky. We had arrived in the islands at the beginning of the garua, the dry season. After a hearty breakfast we toured the Charles Darwin Research Center where we learned more about the conservation techniques being practiced to protect the islands. The research station is working to restore the giant tortoises which were almost wiped out by sailors and pirates who placed them in the hulls of the ships in order to have fresh meat onboard.

We saw Lonesome George while touring the CDRC. He is the last of the giant tortoises that once inhabited Pinto Island. He lived in one of the habitat areas with other giant tortoises of different species. The oldest tortoise could be 170 years old and might have been observed by Darwin. We had lunch on the Floreana and were back on the island by 1:30 to hike in the highlands where the giant tortoises roam freely. After dinner we motored through the night to Floreana Island. 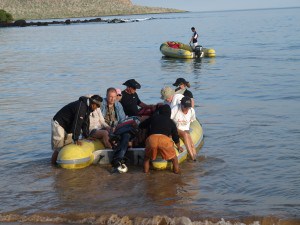 The afternoon was spent snorkeling in the clear turquoise water near Devil’s Crown where colorful starfish and sea urchins littered the sandy bottom. Later in the afternoon we had our first wet landing – the ponga engine is lifted and the stern (back) of the ponga drifts into the sandy beach where passengers disembark and wade to shore.

We explored the area around Cormorant Bay with its dense hidden mangrove-belt located behind the beach. The quiet lagoon should have been filled with Galapagos flamingoes, but they had already vacated the area following their main diet, schools of shrimp, to another location. We were treated to one lonely flamingo feeding in the lagoon on our way back to our starting point. We watched another beautiful island sunset before returning to the Floreana for dinner. 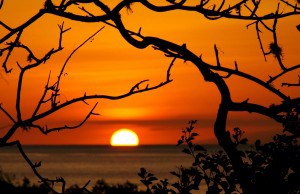 Day five produced another cloudless beautiful day and another island. Our wake up call, a soft knock on our cabin door, came at 5:10. Early mornings and late afternoons are the best times to take photos due to the lack of harsh light. We started with a ponga excursion to Gardner Bay on the eastern shore of Espanola Island. We returned to the yacht for breakfast at 8:30. Soon we were snorkeling with white-tipped reef sharks, golden rays, king angelfish, schools of yellow-tailed surgeonfish, seahorses and solitary parrotfish. Back onboard by 11:30 we ate lunch and boarded the pongas for a wet landing and a beach combing adventure. By 3:30 we were back on the Floreana motoring to San Cristobal. We had a delicious dinner onboard the Floreana in San Cristobal’s harbor followed by a briefing about the following day’s schedule.

We took a bit of a break on day six. There were no early morning excursions. We had breakfast at 7:00 and then took the pongas to the dock to visit the Galapagos National Park Interpretive Center, which opened its doors to visitors in 1998. The center visit was followed by free time in the village of San Cristobal. After lunch we navigated for about an hour across a small channel to Isla Lobos. Isla Lobos means sea-lion island and the name proved to be very true. I walked along the beach counting over 250 sea lions lying on the beach and frolicking in the surf.

Back onboard we motored past Kicker Rock. One of the crew members spotted what were soon identified as minke whales blowing water from their blow holes. Our guide, Christian, and two other crew members took one of the pongas out to try to get photos of the whales with one of our underwater cameras, but the whales headed away from us in the direction of the setting sun. We continued on motoring to Sante Fe Island while we watched another sun-filled day fade away.

We explored Sante Fe on the morning of day seven. The mid morning was spent snorkeling with the sea lions. I watched about eight sea lions dive deep into the depths of the clear water along the jagged rocky shoreline. Near the bottom the sea lions would expel a bunch of bubbles and then float to the top maneuvering in and out among the bubbles. They seemed to be having a great time. Every so often one would brush against my leg or playfully grab my swim fin.

After lunch we motored a short distance to the small islands of North and South Plaza, located a short distance east of Sante Fe. Only South Plaza Island is open to the public. North Plaza is reserved for scientific research. We climbed to the south side of South Plaza where dangerous cliffs dropped off to large rocks and rough surf. The cliff is a favorite nesting spot for the red-billed tropic birds and swallow-tailed gulls. They joined brown pelicans, frigates, blue-footed boobies and Nazca boobies gliding along the cliffs and over our heads. The flat area near the cliffs is a place where old and sick sea lions go to die. We found several skeletal remains of sea lions in an area where the waves pounded into a crevice in the cliff. Several large sea lions were lying motionless around the bones.

The eighth and final morning was spent exploring Black Turtle Cove in the pongas. We observed many green sea turtles as well as white tipped reef sharks and spotted rays. The calm waters were filled with sea lions, brown pelicans and other water birds. After about three hours of traveling around and through openings in the mangroves we headed back to the Floreana to pack our bags and motor to Baltra to fly back to Quito.

Our eight day adventure in the Galapagos Islands had come to an end. But we have many memories and about 2000 digital photos to remember our wonderful experiences. We are returning to explore the northern islands from the Floreana Yacht in the summer of 2013. Why not join us on an adventure that will prove to be beyond your greatest expectations.