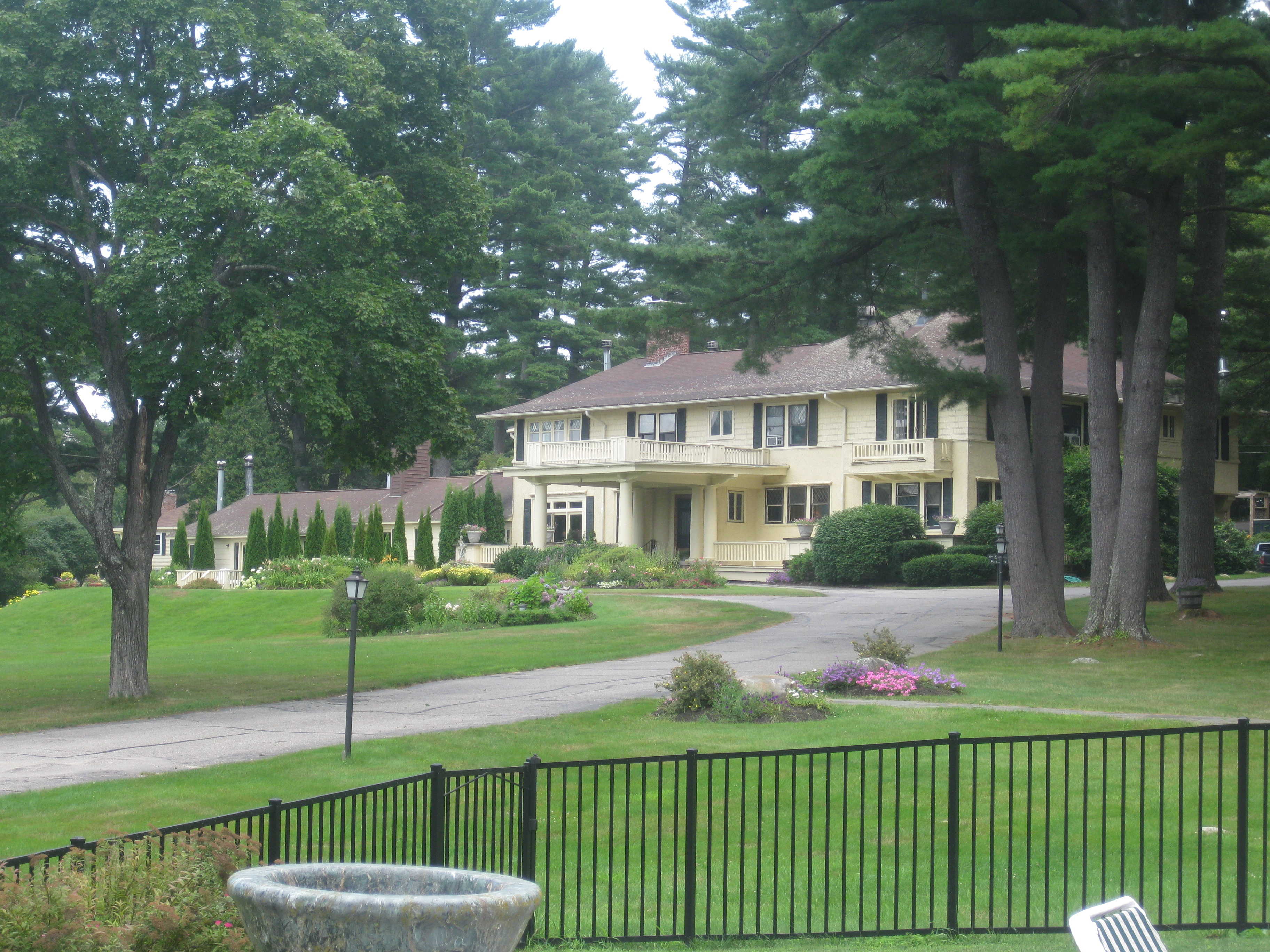 Thirty years ago “On Golden Pond” stole the hearts of American moviegoers and scored Oscars for Katharine Hepburn and Henry Fonda.  Its filmmakers told the story of family reconciliation scattered across the deep, dark blue waters of Squam Lake.

With its 273 lakes and ponds, the New Hampshire Lake region is aptly named. Visitors discover an exquisite combination of lush rolling hills, the un-obscured backdrop of the White Mountains, and most of all, pristine lakes.  Names like Squam, Pemigewasset and Winnipesaukee are reminders of the region’s past and the Native Americans who once navigated its waters.

Last summer we floated back thirty years taking a lovely pontoon boat tour around “Golden Pond.”  We heard stories of Norman and Ethel Thayer at their summer house on their beloved lake, the song of the loons and the perilous attempt to catch the big fish “Walter.”  In the early stages of our expedition, Captain Dale spied a 14-year old eagle, then a pair of shaggy eaglets nesting in a stand of towering pine trees on Potato Island. 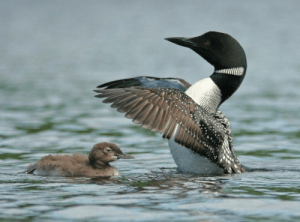 The size of a small goose, the elusive and often skittish loon’s ancestry dates back some 65 million years

These patchy islands of spring-fed Squam Lake add to the allure of its unique landscape, but it’s the quiet coves that are a perfect haven for the loons.  About the size of a large duck or perhaps a small goose, the elusive and often skittish bird’s ancestry dates back some 65 million years.  Sitting gracefully erect, head held high, in a flash the loon dips its head and silently slithers beneath the surface for another fishing venture.  Submerged for what seems an inordinate amount of time, the bird re-appears some 50 or 60 feet away, its meal already consumed. It’s safe to say that the loons occupy a special spot in the hearts of the lake’s residents.

Back in 1980 when the movie was being shot, the sleeping village of Holderness morphed into a Hollywood studio back lot.  These days, residents and newcomers are drawn not only by its physical beauty, but also by a unique community’s fervent commitment to protecting a special place.

Overlooking the lake is the circa 1890 post-and-beam Red Barn packed with everything from home and garden items to “Squam-wear,” jewelry, candles, bags, home décor and delectable array of take-out foods. Stop by for a visit and sample the homemade fudge.

An easy stroll from the Red Barn brings you to the National Science Center famed for its open meadows, beautiful gardens and marsh boardwalks that connect to interactive natural exhibits where native animals reside.  You’ll see black bears, mountain lions, river otters, bobcats and a variety of raptors, a group of birds that includes hawks, owls, eagles (and other fish-eaters), and falcons.  The center does a splendid job of advancing understanding of our ecology by exploring the region’s natural world. 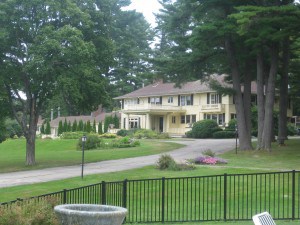 The Manor on Golden Pond

Sided in stucco and painted shingles, the Manor on Golden Pond blends gracefully into the surrounding towering pines, the gently rounded White Mountains in the distance, and the sweeping lakeside views. It was built in 1907 as a magnificent country estate by a wealthy Englishman for his debutante wife.  By the 1930s it was transformed into an art colony for photographers before later opening its doors to guests.

Take a seat at the top of Shepard’s Hill in anAdirondack chair and watch as kayakers glide effortlessly across the water.  Or play a set or two at the Manor’s superb clay tennis court, then take a dip in the oversized swimming pool.  That evening we dined at their distinctive Van Horn Dining Room where we indulged ourselves with superb lobster bisque, filet mignon, rack of lamb, and vegetables sautéed to crunchy perfection. Capped it all off with heavenly crème brulee.  Afterwards we stepped into the Three Cocks Pub just off the library.  Named for the decorative roosters that strut proudly on the copper bar and sill, you can opt for a vintage port or well-aged cognac or try one of their specialty cocktails.

A nine mile drive down twisty Route 3 brings you to the village of Meredith, tucked on the northwest corner of Lake Winnipesaukee.  Carved by glaciers from almost the dead center ofNew Hampshire, Lake Winnipesaukeeis a whopping 72 acres with 182 miles of shoreline. Nearly diamond-shaped, it’s edged with dozens of inlets, coves, bays, and dotted by more than 250 islands. As a result, the lake gives the illusion of being a chain of much smaller lakes and ponds, rather than one massive body of water. If you have deep pockets, you can rent Little Six Mile Island for $2500 per week.

Before Europeans arrived the native people had been enjoying the lake for 10,000 years. The most common interpretation of the name is “Smile of the Great Spirit.” Spend some time on the brilliant sparkling lake and you’ll understand what the Native Americans truly meant.

There is no better way to see Lake Winnipesaukee than from the deck of Mel Borrin’s classy 30-foot Latitude 43° charter.  The skipper and first mate/wife Tina have been navigating the waters for more than four decades.  They provide an intimate cruise peppered with folklore and intriguing tales of the lake and its secrets. Keep an eye peeled for “the Oldest Floating Post Office,” serving lakeside residents since 1892. 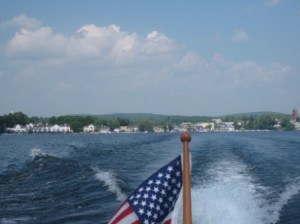 Cruise across Lake Winnipesaukee to the handsome town of Wolfeboro on its eastern shore. It lays claim to being the first-ever summer resort in the nation. In 1763 John Wentworth, nephew of a former governor, was granted land for a summer estate on LakeWentworth, a small lake connected to Winnipesaukee by a tiny river. Blue-blood families and grand hotels eventually followed him, and the village prospered with its lovely public waterfront and picturesque Main Street.

The waterfront village has attracted visitors as diverse as Kurt Vonnegut, Monaco’s Princess Grace and French president Nicholas Sarkozy. No doubt they all dined at the Wolfeboro Inn that delights in the charm and décor of an authentic 1812 country inn.

As for Meredith, it has evolved from a dilapidated linen mill town into a special village resort over the past three decades.  As redevelopment began, hidden within the complex was the original 1800s mill building and the waterfall that provided it with power. Today, it showcases four inns, seven restaurants and the quaint Mills Falls Marketplace that houses country shops and specialty outfitters. 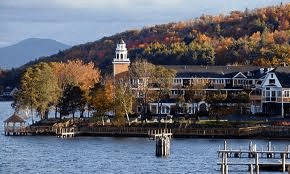 The Inn at Church Landing

The Inn at Church Landing, a 57-room Adirondack-style inn on Lake Winnipesaukee, is a special destination with its rustic décor, crackling fireplace and comfy library.  The rooms are built with extensive use of logs, rough cut and finished woods withAdirondack furnishings and handsome pressed tin-ceilings. Guests sip coffee on their balcony and watch the sunrise. At the Lakehouse Grille we enjoyed grilled tenderloin with a white truffle butter sauce and the spice rubbed grilled scallops with a nice root vegetable hash.  The adjacent lounge is a great spot to meet and swap tales with fellow guests in a cozy atmosphere.

A slower moving destination, the folks here truly appreciate and revel in the slumbering mountains and vibrant bodies of water. The Lake District is old-school.  And that’s the way they like it.