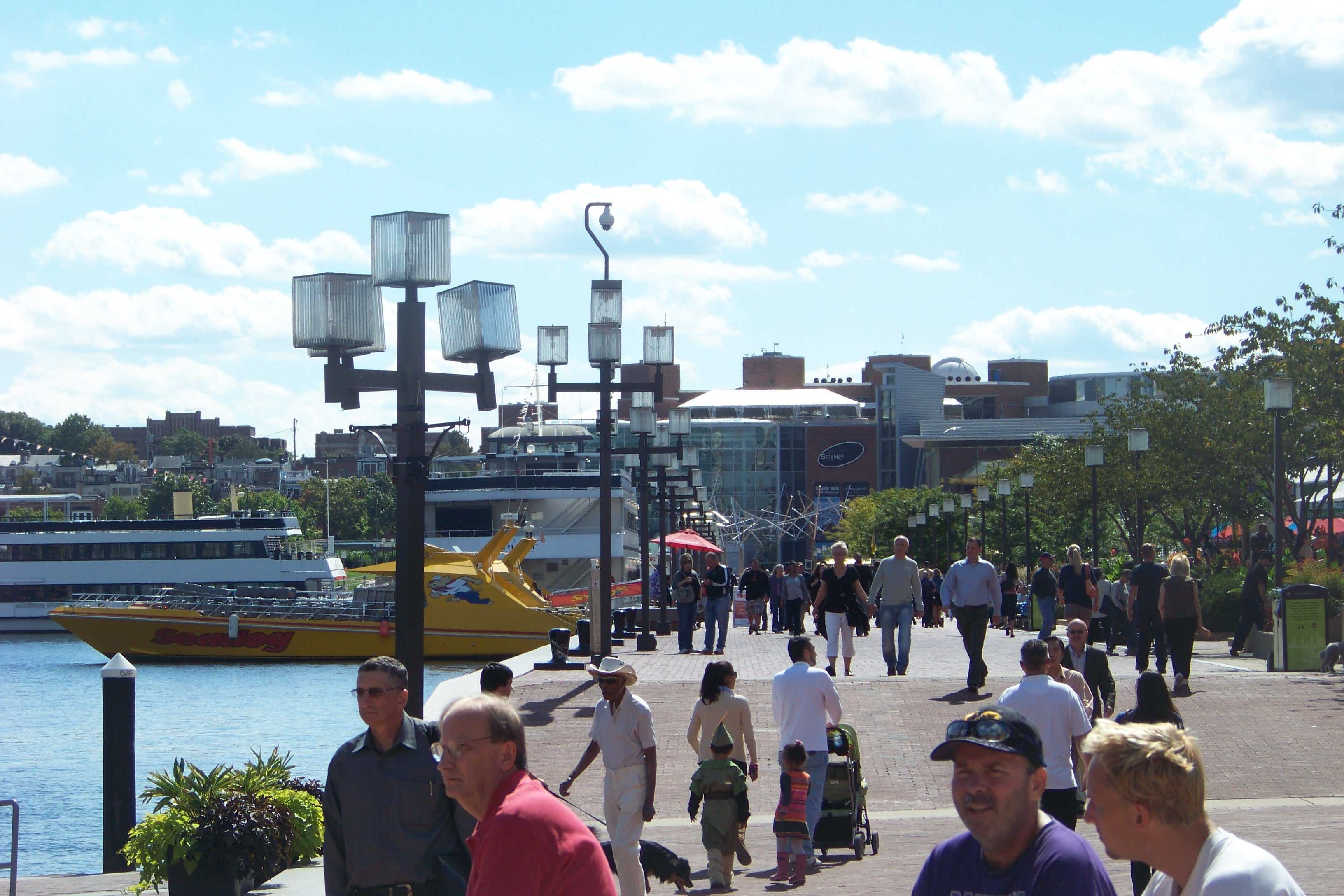 Traveling with Mary Gallagher and Will Davis, photographer.

We try to visit Baltimore once a year for at least a few days and as the years have rolled by we’ve never run out of things to do. Some sites are new, others we can go back to over and over.

Of course staying downtown near the Inner Harbor has its advantages as you can walk to many attractions and take the water taxi, and the Charm City Circulator. Baltimore also has a regular bus service and a metro although as yet, I have not used it.

This last visit we stayed at the Hampton Inn and Suites Inner Harbor. For an inner city hotel the windows were very good at keeping out the noise, the room was spacious and clean. Everything seemed fresh with the flavor of a historic property. I loved the public areas with huge marble expanses – this was once headquarters for a major insurance company – similar to staying in a bank. 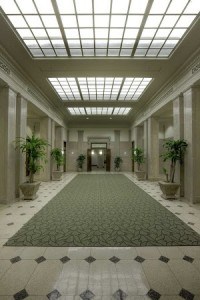 The hotel breakfast was more than adequate with eggs, omelets, waffles, fruit, yogurt and more. They have 24 hour “good” coffee in the lobby. Across the street and down about half a block for those attacks of starvation moments is a Subway shop.

We were just a few blocks from the Inner Harbor and the water taxi main base. The fleet of 12 blue-and-white boats is the oldest of its kind in the country. They offer reasonable prices ie $12 per adult for one price all-day, unlimited on-off service to more than 30 attractions and neighborhoods. Baltimore like other large urban cities is not car or parking friendly. Avoid driving your car as much as possible or come by train or plane.

If you were going to get off at every water taxi stop and walk around it isn’t possible in one day. This time we picked the Ft. McHenry and Fells Point stops to depart and walk around. Other times we’ve stopped at the Rusty Scupper and walked a block or so to Federal Hill and the American Visionary Art Museum and once the Canton neighborhood for lunch. 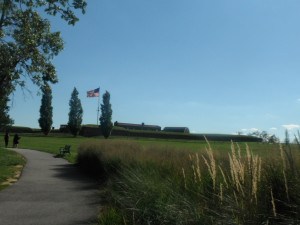 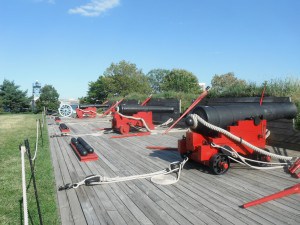 Even if you don’t get off at a stop the ride is wonderful giving you a great outing on the water providing a beautiful day with lots of waterfront sights.

Walking around the Inner Harbor itself is always entertaining with a few musicians and eclectic crowds of people. There are loads of shopping and dining options. The convention center is here with a variety of exhibits each year. The Aquarium is also walking distance. 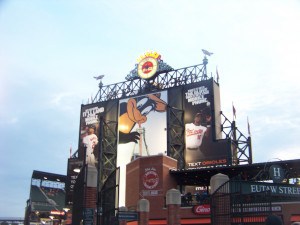 One night we went to the Orioles game at Camden Yards. It was a slightly long walk from the hotel but doable if you don’t have any knee or other mobility issues.  We missed the bus connection but a person at another stop helped us and we rode most of the way for free on the Connector.

For those who love sports, baseball at one of the top-rated ballparks in the U.S, Camden Yards can’t be beat. Oriole fans are a cult among themselves no matter their age from toddlers to seniors. The stadium is beautiful with a wonderful museum, incredible public spaces, a variety of dining and drinking options (which seem frequently the reason to attend sporting events). All the features here make it worthwhile to come early to explore and eat! Public transportation is highly preferable to trying to drive your car and park. 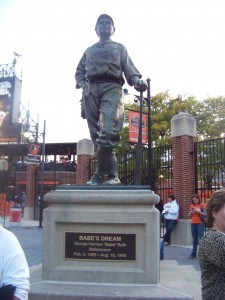 The  Babe Ruth Museum is also a block or so from Camden Yards.

One of our stops on the water taxi was Fells Point with its wonderful historic buildings, eclectic shopping and of course abundant eating opportunities. We chose a quick inexpensive option with the lunch fish special at ….. the located at the far end of the market building. 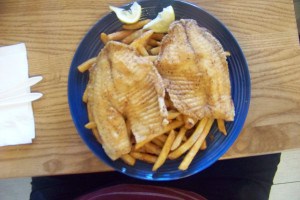 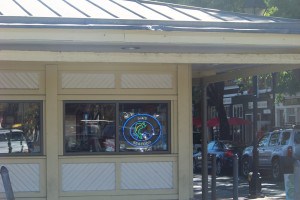 Sal’s for Fish in Fells Point. 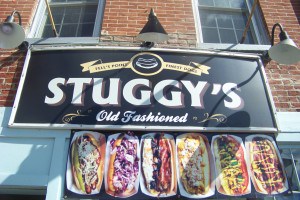 I’ve been here for the Christmas Lighted Boat parade in years past but have yet to make the Annual Fell’s Point Privateer Festival at Thames Street Park, Ann Street Pier,
Broadway Square, Broadway Pier

Usually in April, everyone loves to come for this opportunity to honor the maritime history of Fell’s Point and the patriotic privateer fleet. It’s family fun celebrating pirate sailing lore with a weekend full of activities. Best of all entry is free! 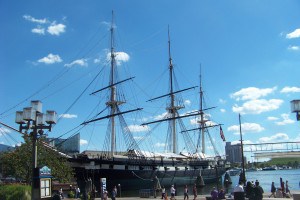 Glimpse into the history of the War of 1812, board and tour tall ships including the Pride of Baltimore II, witness a live “battle at sea” demonstration, stroll the craft & food market, participate in family activities and more throughout the weekend!

There is no better time to visit Baltimore than in 2013, as the city and State of Maryland salute the Bicentennial of the War of 1812 and “The Star-Spangled Banner,” pay tribute to Harriet Tubman and the Underground Railroad and recount the days of a city divided as part of the 150th Anniversary of the Civil War. 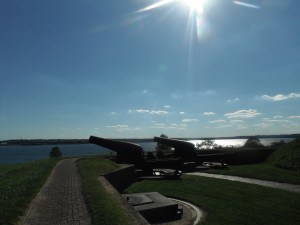 From the ramparts of Fort McHenry National Monument and Historic Shrine, to the inspirational legends at the National Great Blacks In Wax Museum, to the largest collection of Civil War locomotives ever assembled at the Baltimore & Ohio Railroad Museum, the past is present this year in Baltimore.

Various passes are offered call 1-888-251-0531 or visit the www.visitbaltimore.org site for information and to purchase your Star-Spangled Banner Pass, the Legends & Legacies Heritage Pass and the Civil War Explorer Pass.

We talked about using the water taxi to get around but a great way to see Baltimore and get to landlocked places is the Charm City Circulator and it’s free! We rode three routes just exploring the city.

The Charm City Circulator (CCC) is a fleet of 21 free shuttles that travel three routes in Baltimore City. They include: The Purple Route which runs from Penn Station to Federal Hill, the the Orange Route which runs from Hollins Market to Harbor East, the Green Route will run from City Hall to Fell’s Point to Johns Hopkins, and starting June 4, the Banner Route which connects the Inner Harbor and Fort McHenry just in time for Baltimore’s Star Spangled Sailabration.

According to their website a shuttle arrives every 10 minutes at the designated stops on each route although we did wait a bit longer in some locations. Features include:

Now although there is no narration this is a wonderful way to see the architecture and different neighborhoods of Baltimore. Plus you can hop off when something looks interesting and just catch the next one. 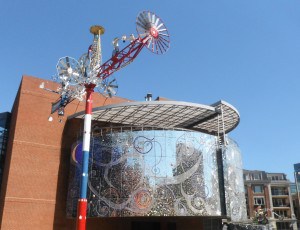 Every trip I’ve ever made to Baltimore has included a visit to the American Visionary Art Museum which is accessible by the water taxi (a short walk) or the Charm City Circulator (a long walk) or on street metered parking.

The American Visionary Art Museum has grown from a collection overflowing in the basement of founder Rebecca Hoffberger to a 1.1 acre site with two buildings and sculpture gardens of American Folk art or what some call “outsider” art. The permanent collections are fascinating and the special exhibits are extraordinary. I remember a number of years ago seeing miniature pictures sewn by prisoners with thread they had unraveled from their socks. As a travel writer I see a lot of museums every year but will never forget that exhibit. 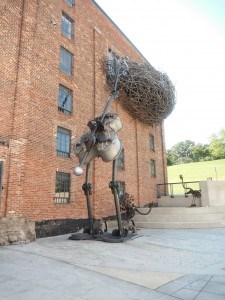 Special events at the American Visionary are truly unique and the Kinetic Sculpture Race is one of them. Totally human-powered works of art, designed to travel on land, through mud, and over deep harbor waters are constructed out of used bicycles, gears, and parts, created by lunatic geniuses who tinker. The machines can be simple, small crafts, piloted by only one brave soul, or they can be over 50 feet long, extremely well-engineered, sophisticated vehicles powered by a team of pilots.

The race is held in May (see website for this years exact date) at the American Visionary Art Museum (arrive early to take part in Opening Ceremony and Blessing of De Feet!). Other great spots to see the vehicles are the 1st checkpoint atop Federal Hill; the water entry at the Korean War Memorial Park in Canton; the uphill mud-pit in Patterson Park; the not-so-quick-sand pit in Patterson Park; and, of course, anywhere along the 15-mile route through Baltimore. 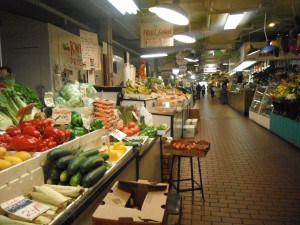 We also took a quick walk through the historic Cross Street Market on Federal Hill while exploring the neighborhood shops and restaurants. You can ride the Charm City Connector here. The top of Federal Hill is fantastic for panorama views and a photographers dream. 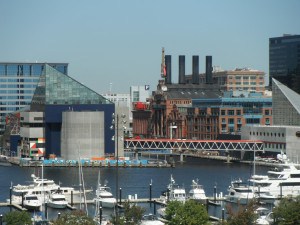 We’ll be back soon and do all these sites in greater depth as well as a visit to the outstanding Baltimore Museums and other historic neighborhoods with their festivals and outstanding attractions.

Sources for your visit to Baltimore: