Touring and Fishing the Niagara River Area and Lake Ontario 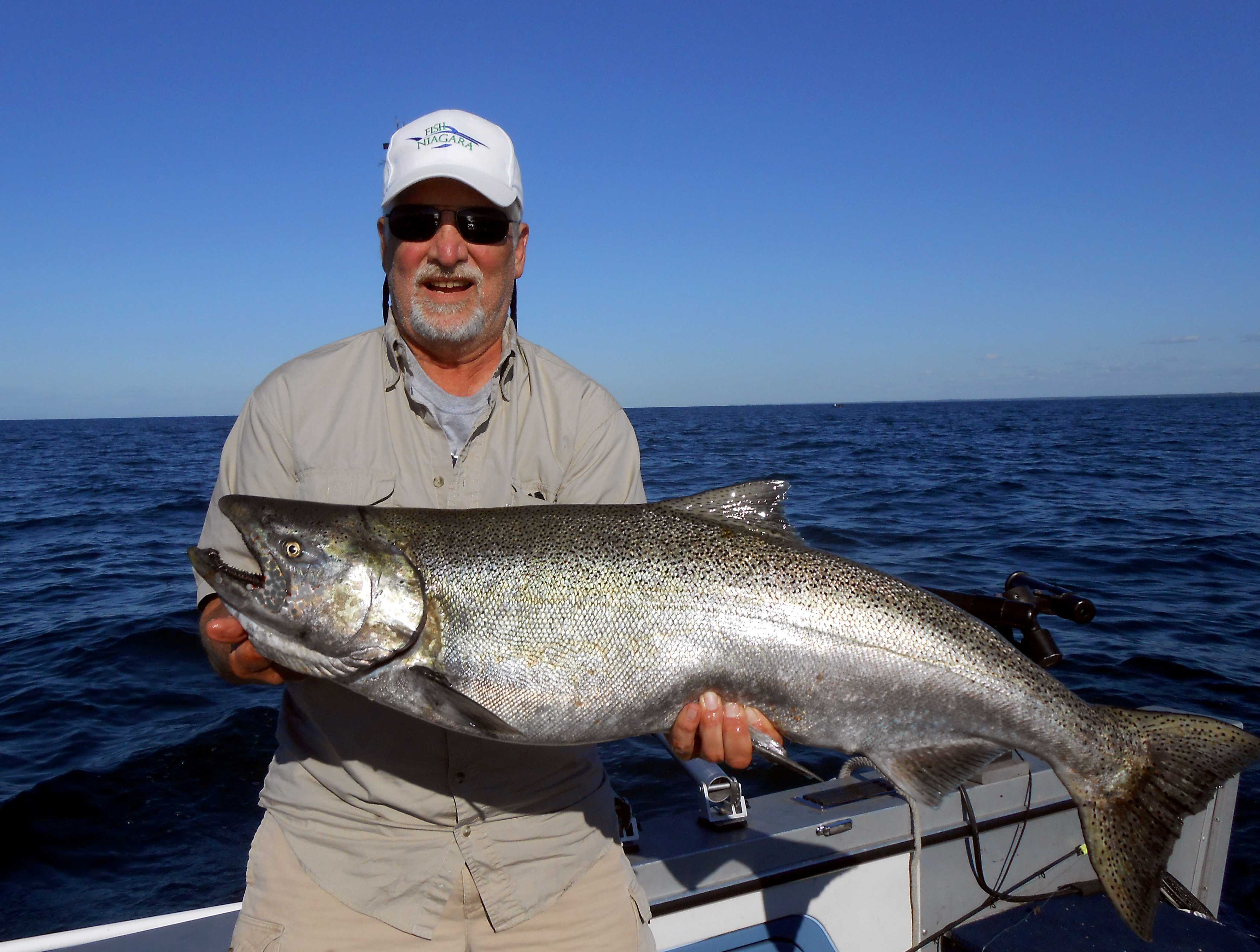 The Niagara River region of New York, which includes the Niagara River’s 22 mile course downstream from Niagara Falls to the river’s mouth by Fort Niagara, and a portion of Lake Ontario and Lake Erie, is among one of the finest fishing destinations in the world. The area provides year round fishing opportunities for many different game fish species including king salmon (chinook), steelhead (migrating rainbow trout), walleye, brown trout, lake trout, smallmouth bass, largemouth bass and a variety of panfish species. Different fish species are targeted at different times of the year.

What’s more, a trip to the Niagara area can be truly a family affair. If your family or group is not totally into fishing pursuits you can vary the fishing trip with a great variety of local touring which includes Niagara Falls, Maid of the Mist falls boat tour, Cave of the Winds, Aquarium of Niagara and Niagara Legends of Adventure Theater. All of these venues and the use of the Niagara Scenic Trolley can be combined into one 35 per cent discounted pass and purchased as the Niagara USA Discovery Pass. Contact Bill Hilts Jr., the Outdoor Sports Specialist at the Niagara Tourism and Convention Corporation, for tips on fishing guides, lodging and tours. Call Bill at 716-282-8992, Ext. 303 or go to Bill@Niagara-USA.com.

This area, the Niagara Escarpment, is protected by Lake Ontario. The lake acts as a heat basin. It moves wind toward the area when the water is warmer than the air and away from the lake when the air is cooler. The milder weather makes the area great for grape growing, thus protecting the vines from damaging frosts. There is an extensive wine trail offering various fruit and vinifera (derived from European grapes) wines. Check their website at NiagaraWineTrail.org. 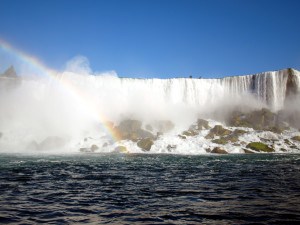 Niagara Falls from the Maid of the Mist boat tour.

My wife Bev and I stayed at the Barton Hill Hotel and Spa in Lewiston, New York during a recent fishing trip to the Niagara area. Many women are not very comfortable in the cabins or fishing motels that the men often find habitable on their fishing ventures. But the Barton Hill Hotel and Spa with its old hotel charm, in-house bar and restaurant and spa facilities is sure to summon the ladies back for additional trips. The hotel is conveniently located overlooking the Niagara River in Lewiston. Check www.bartonhill.com for more information, directions and room prices. 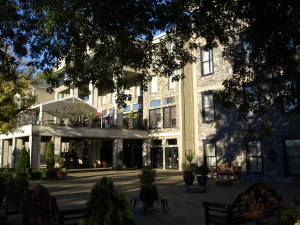 The town of Lewiston is a beautiful river village with colorful raised flower containers lining the main street. The quaint village offers many restaurants with both light fare and fine dining to suit every tourist’s tastes. There are also small mom and pop shops to browse through during a visit. The public boat ramp with ample parking and a snack bar overlooking the river are located at the end of Lewiston’s Main Street. 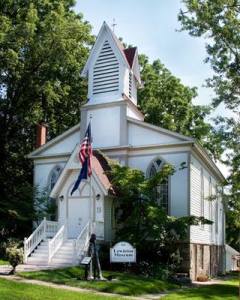 Hilts recommended that we connect with fishing guide, Captain Matt Yablonsky of Wet Net Tours, for our two day mid-week fishing adventure. We find that mid-week fishing is less crowded than the weekends and highly recommend mid-week trips, if possible. 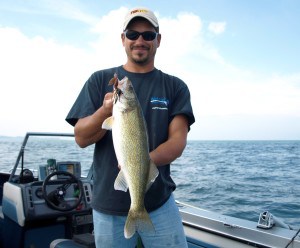 Captain/fishing guide, Matt Yablonsky holding a walleye.
We met Captain Matt in Olcott at the Newfane Marina boat launch at 6:45 on a Wednesday morning in September. Once our lunches and beverages were stored out of the way we motored out of the marina and before we knew it we were out in Lake Ontario moving in the direction of Toronto, Ontario. We pounded through the waves to approximately 10 miles from shore. The winds were a bit high creating a wave chop of two to three feet, but Captain Matt ably maneuvered his 21 feet Lund, Baron Deep V fishing boat along with the wind, thus lessening the feel of the choppy water when we started fishing. By 8:00 a.m. he had six lines trolling behind the Lund. Two were on downriggers at about 60 feet deep.

Bev had the first positive hookup around 8:10 a.m. The boat, set on auto-pilot, enabled Captain Matt to quickly review the proper reeling methods to Bev and me as she reeled in what appeared to react like a king salmon. Unfortunately, her floracarbon line crossed over one of the wire lines and the floracarbon broke before we could get our net wet. That is why it is called fishing and not catching. But Bev persevered, took the next hookup and deftly reeled in the first steelhead of her fishing career. After a few photos our lines were back in the water hoping to lure more steelhead or king salmon to the net and the cooler. 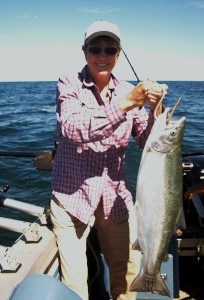 Bev and her steelhead

I reeled in a decent size steelhead around 9:30. After a few photos my steelhead joined Bev’s in the cooler. My line was back in the water as we continued trolling for more fish to hopefully fill the cooler. Bev caught her first king salmon of the day about 11:20 a.m. She followed Captain Matt’s reeling advice perfectly, despite the salmon’s determination to out swim the trolling motor, swim by the boat on our port side and return to the depths of the lake. Captain Matt quickly moved the other rods on that side of the boat out of the way so Bev could continue fighting her fish. After a few minutes we had the first king salmon onboard. After a few high fives, fist bumps and more photo opportunities the king joined the steelhead in the cooler. All three fish were destined for the grill.

The depth/fish finder was continually marking baitfish and larger fish on the screen. Like in many cases, as soon as we began a lunch break another reel began singing its “fish-on serenade.” I dropped my turkey hoagie, grabbed the rod, but lost the fish as I was reeling it in. Bev quickly followed my long range release (fish lost before it is netted) with another hookup and stealthily added another steelhead to the cooler. Bev’s largest steelhead was a bit shy of the minimum weight to be entered as the day’s largest steelhead. It had to be at least 10 pounds.

We headed back to the marina around 2:00 p.m. with four steelheads and one king salmon in the cooler. Bev caught three steelhead and one king and I had one steelhead. I told her I was going for quality not quantity and she would have to wait until the next day to see what I meant.

After a comfortable night at the Barton Hill Hotel we met Captain Matt at 6:00 a.m. the following morning (Thursday) back in Olcott. The flags at the marina were flapping in the wind like they were trying to escape their flagpole anchors. Captain Matt met with a few other fishing guides to discuss the weather conditions and forecast. The local captains all decided to abort the days fishing charters. One captain, who had trailered his boat from Erie, Pennsylvania to the Olcott area to participate in the final few days of the Lake Ontario Counties Trout and Salmon Derby decided to give it a try. The final day of the LOC was Labor Day. 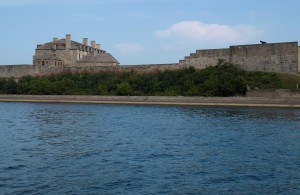 The fort as viewed from Lake Ontario.
We decided to check back later in the day and meet Captain Matt if the wind and lake conditions became favorable. In the meantime Bev and I toured Old Fort Niagara. The fort is located at the mouth of the Niagara River just minutes from the falls. It spans more than 300 years of history. Three flags fly daily above the parade grounds to symbolize the three countries that occupied the fort over the years. 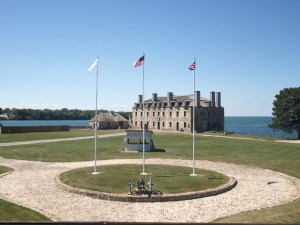 Old Fort Niagara parade grounds with the French Castle in the background.

The buildings were restored between 1926 and 1934 and the fort is currently operated by the not-for-profit Old Fort Niagara Association, Inc. in cooperation with the New York State Office of Parks, Recreation and Historic Preservation. Don’t miss visiting the fort when you visit the area.

Our view from the parade grounds indicated that Lake Ontario was beginning to calm down. The Toronto skyline, 27 miles northwest, was easily viewed with the naked eye. We called Captain Matt and decided to meet at the Youngstown Fort Niagara boat ramp and fish out of the mouth of the Niagara River. The ramp is within the Fort Niagara Park.

The difference in the lake from morning to afternoon was unmistakable, although, we had to bang our way through the chop created by the river current meeting the lake current. Once we reached our fishing area the fish finder’s screen began marking fish and bait fish all over the place. “It’s about to get exciting!” Captain Matt exclaimed as he set out the lines.

Bev caught several skippy king salmon (first year fish destined to one day fill some lucky anglers’ coolers). I caught a skippy and finally brought a king salmon to the net around 4:30 p.m. It weighed 23 pounds on Captain Matt’s digital scale; another fish a bit shy of the daily Derby winner weight. “That’s what I’m talkin’ about!” I told Bev. “I was going for quality not quantity!” Bev beat me in total fish, but I landed the biggest fish of the trip!

Bud and his King Salmon!