Home » Blog » Venturing Out Beyond the Beach Has Its Rewards.

Venturing Out Beyond the Beach Has Its Rewards. 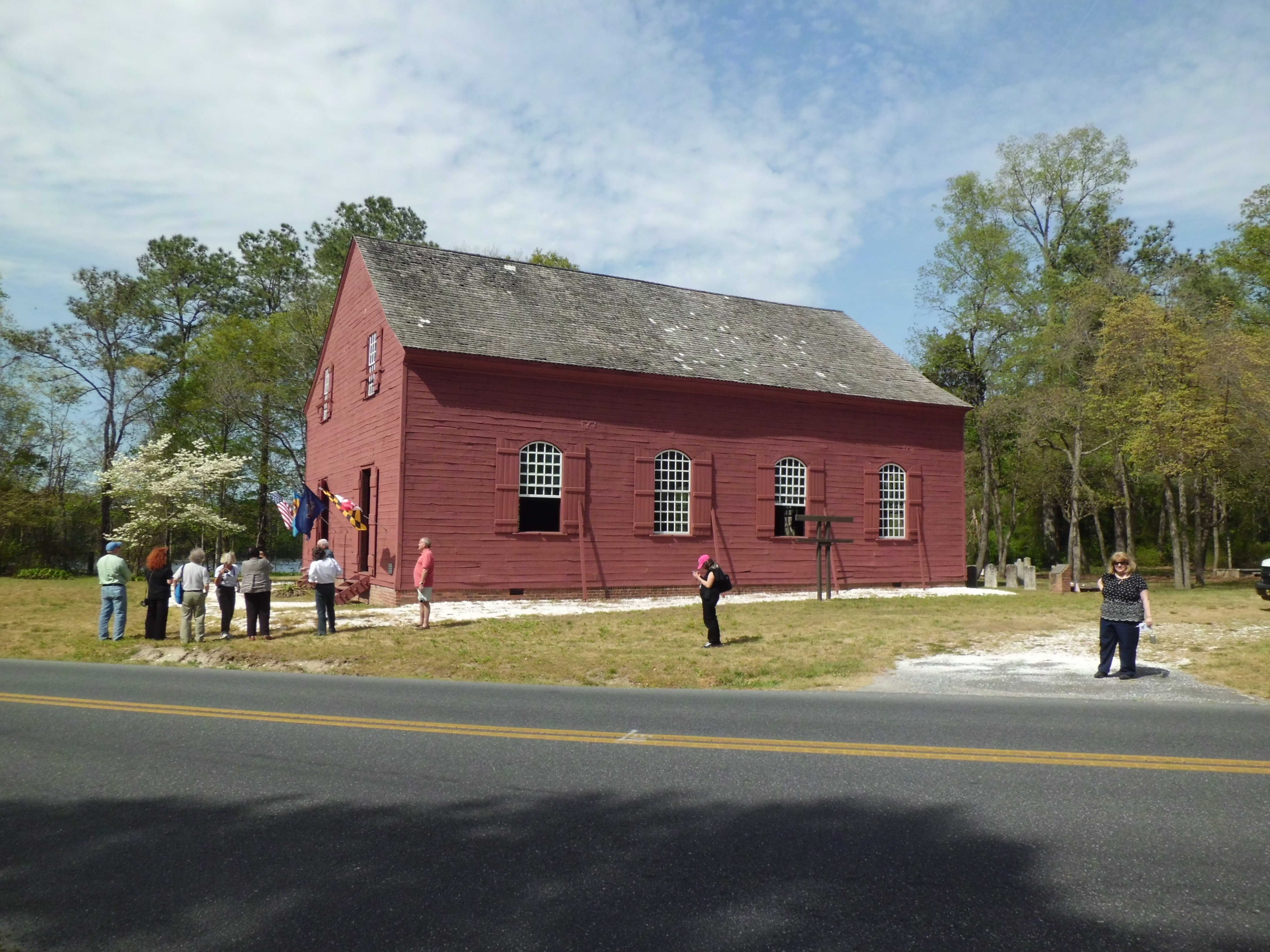 Story and photos by Arnold Berke

The glittering oceanside of Rehoboth, and its sand-and-sea sisters, is a wonderful place in which to vacation. But while you’re here, why not discover what’s beyond the beaches?
I did so recently, on a day trip to the southwest corner of Delaware.
A maven of old houses and towns and back-roads scenery, I love to ditch the main highways and detour into history. So I chose a gaggle of places around Seaford—happily, it turned out, for they offered architectural and scenic delight plus historical richness (of surprisingly southern bent).
Seaford sits on the upper Nanticoke River, a handsome little burg with an attractive downtown. Despite the name, it’s about as far from the sea as one gets in Delmarva. Yet its connection to the water—Chesapeake Bay—shaped its history. 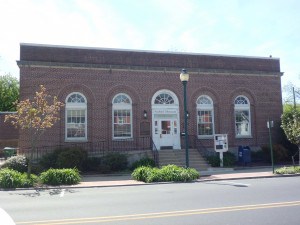 Seaford Museum
I absorbed that story in the Seaford Museum, in the imposing former post office (1935). Dreading the sort of bland repository that “history museum” implies, I was pleased when this one, opened in 2003 by the Seaford Historical Society, immersed me in the long local timeline with ingenuity and wit.
The museum casts a wide net, from Native Americans to nylon, shipbuilding to canning, chickens to the Chesapeake. The bay’s oysters, shipped up the Nanticoke, fueled Seaford’s prosperity. “We were the shopping center,” said local scholar Jim Blackwell. “They brought the raw materials up here, and took products back home.”
An in-depth exhibit portrays the river pilots, most of them African American. “They knew the river best,” said Blackwell. “When you consider the racism of the day with the responsibilities they were given, it’s a wonderful, wonderful story.” Another display tells the sorrier tale of Patty Cannon, notorious in the 1820s for kidnapping and selling blacks into slavery in the South through a sort of reverse Underground Railroad.
And the nylon link? In 1939, DuPont built the world’s first nylon plant here. “Seaford, Sussex, coming metropolis, busily prepares for future greatness,” gushed the Wilmington Sunday Morning Star.
North of town stands the Gov. Ross Mansion and Plantation, its 1859 house a delicious version of the Italianate “country villa” popularized by landscape gardener A. J. Downing. Delaware governor from 1851-1855, William Henry Harrison Ross was a popular pol who brought the railroad to Seaford, helping farmers switch from wheat and corn to more pricey crops quickly shippable to Philadelphia (along with those oysters). 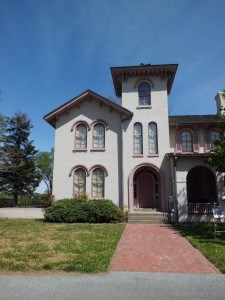 Gov. Ross Mansion
The Historical Society bought the estate in 1976 and has restored it skillfully. The house’s fully furnished period interior, with stylish main parlor, impressed me with its well-preserved woodwork. At the other end is the clapboarded original section from the 1760s. I’m easily diverted by details behind the big picture, so it was fun to eyeball “M.G. Ross” cut into a bedroom window pane by the governor’s daughter Mary—a corny house-tour staple, I know, but a treat just the same.
Adjacent is Delaware’s only surviving slave cabin. Yes, Ross kept slaves—the use of “plantation” is your tip-off—and was so strong a Confederate sympathizer (one of many hereabouts) that in 1861 he had to flee to England. The Ross saga underscores the encounter in Sussex County between contrasting cultures, north and south.
Heading downstream, I took the Woodland Ferry—which has crossed the Nanticoke with sundry craft since the 1740s—and drove through Bethel, a leafy hamlet once busy with shipbuilding. Next up was a much older, but only lately credited, chapter of Delaware history.
We all know about John Smith, of Jamestown, Virginia fame. Well, he also explored the Chesapeake and tributaries, and in 1608 laid anchor on Broad Creek off the Nanticoke, meeting peaceably with the Nanticoke Indians. The story was news to me, so it was fascinating to visit the Captain John Smith Monument in a creekside park. Recent research by Maryland, Delaware, and the National Geographic Society verified Smith’s account, leading to installation of the monument in 2007. 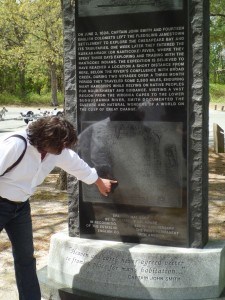 Russ McCabe explains the Captain John Smith Monument
Nanticoke descendants took part in the unveiling. “The ceremony had some kind of historical, cosmic symmetry. I still get goose bumps thinking about it,” said former Delaware state archivist Russ McCabe, explaining the tall granite stele, which shows Smith’s own map of his voyages and trumpets their significance. One sentence rings: “Smith documented the culture and natural wonders of a world on the cusp of a great change.” 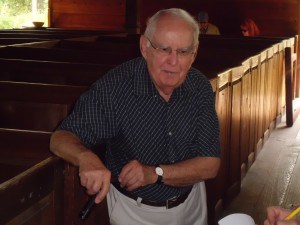 Kendal Jones describes interior of Old Christ Church
My last stop was Old Christ Church (1772), an all-wood, unpainted, unaltered “chapel of ease” (built for convenience in rural areas). Parishioner Kendal Jones described the simple single-gabled exterior, then opened a pair of husky double doors to reveal a gorgeous hall encased in heart-pine and outfitted with 43 box pews and raised pulpit with sounding board. “It was built by a ship-carpenter,” Jones said, “so the vaulting is like the bottom of a boat.” 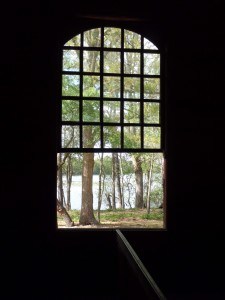 Looking through window at Old Christ Church
At one time, he said, Sundays were big. “People came by boat, pulled up here for the day, attended long several-hour services, brought their meals, did their socializing, too.”
Though unheated and unwired, the church is used on occasion. “We have a Christmas service where I tell people to wrap up like you’re going to a football game.”
It had been a long day for me, deep in Delaware, but somehow I didn’t feel tired as I headed back to the beach, my mind’s eye teeming with places from so long ago—yet here for us still.
Rehoboth homeowner Arnold Berke is the former Executive Editor and currently
a Contributing Editor at Preservation magazine of the National Trust
for Historic Preservation.