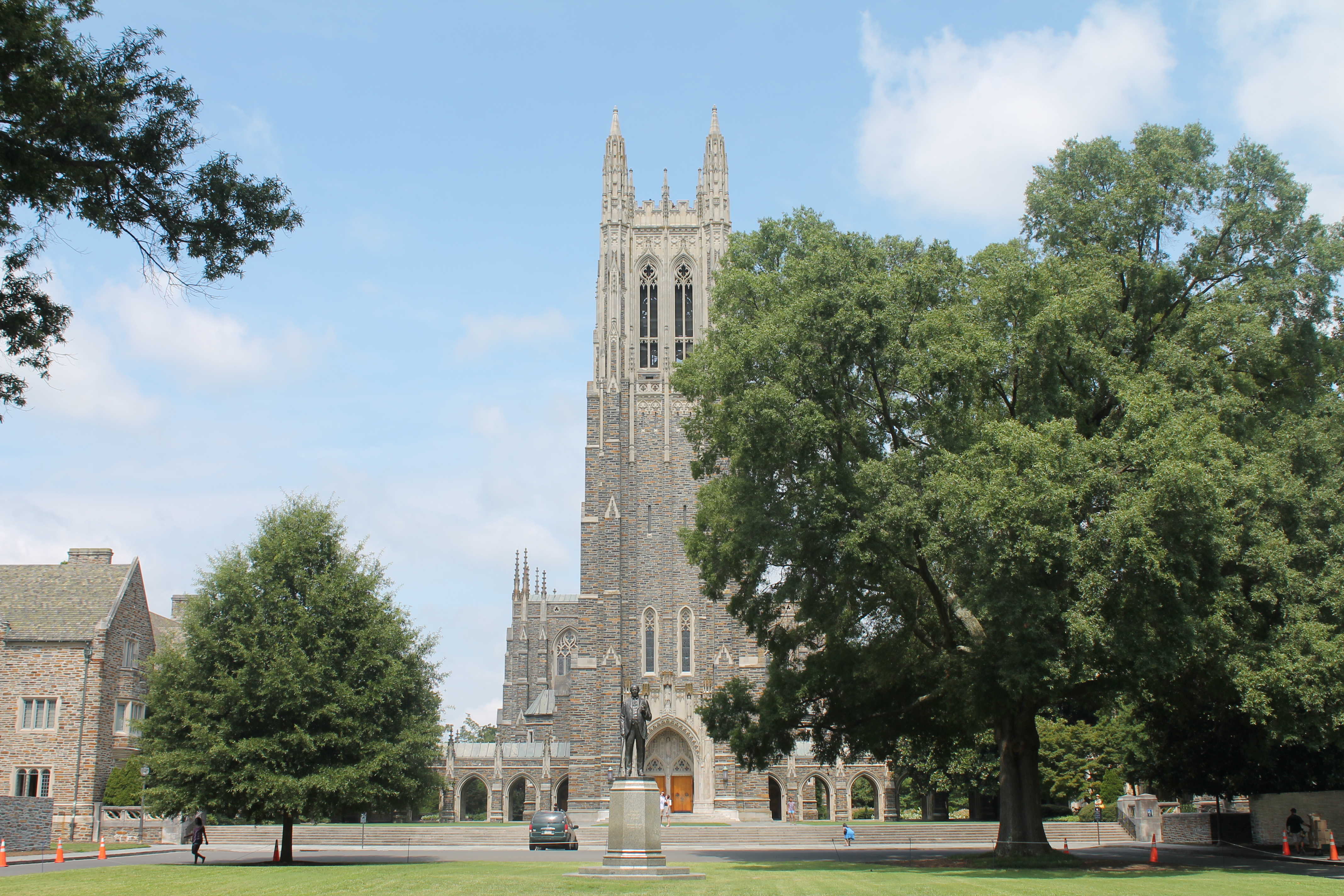 By Mary Gallagher with photos by William Davis

When we lived in eastern North Carolina I always thought that Durham had a bit of a gritty reputation but after our recent four day visit I was ready to call the movers and pick out an apartment! 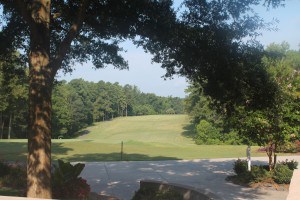 It’s very quiet with the Robert Trent Jones-designed Duke University Golf Course on one side, woods and garden views out every window. Simply park or valet your car and walk in the front door to your inviting alas temporary home. 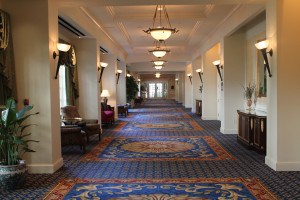 The décor is classically soothing; everyone nice and friendly – real southern hospitality and the public spaces have a gentile quality with subtly elegant furnishings, carpets and art that made us very comfortable. Historic photos of the Duke family line some of the halls and give you more information and a personal look at their great history. 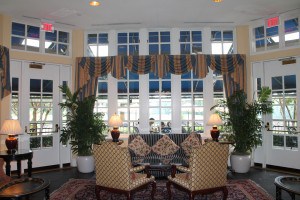 Sitting area off the lobby at Washington Duke Inn.

Our deluxe two room suite was more than adequate with a perfect bed, well placed couch and television, desk with easy computer hookup and 1 ½ baths.

Sometimes when you’re traveling meal times get skewed and you eat a lunch at 4pm and by 9 or 10 when you’re hungry again who wants to go out? The property features the award-winning Fairview Dining Room and the Bull Durham Bar but we opted to relax in pajamas and split a sandwich from the Washington Inns room service menu. The delicious house Pastrami Melt with cabbage slaw, gruyère, belgian ale mustard on griddled marble rye ($14) came very quickly with a giant order of tasty fries and a most pleasant room service waiter. In Durham everyone looks like a college student including the hotel staff. 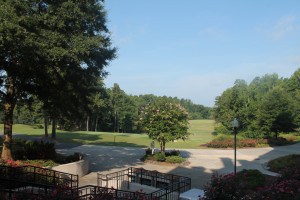 Although we didn’t golf after one very warm afternoon out we headed for the large indoor pool. With it’s adjoining outside terrace it was wonderfully relaxing to swim around or laze in the hot tub and then stretch out on a chaise overlooking the golf course.  How easy to forget real life!

In addition to being a great place to stay the Washington Duke Inn hosts many events including the 2013 Signature Chefs Auction, which is celebrating the March of Dimes’ 75th Anniversary, on November 17. More information is available at (919) 424-2156.

Duke became a named university in the twentieth century. Trinity College became Duke University in 1924, and by 1932 a new campus was constructed, with the 210-foot-high Duke Chapel at its center. Executive Vice President, Tallman Trask III, recently wrote, “Duke in fact became a great university in part because it looked like one from the start.”  Two campuses emerged – one the more urban-like place, in a Georgian red brick; the other “from the forest” designed with local stone and carved limestone details in the popular Collegiate Gothic style. 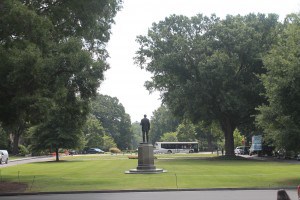 Horace Trumbauer, a Philadelphia architect, along with his chief designer, Julian F. Abele, and the Olmstead Brothers as landscape architects, designed both projects. By 1932, more than twenty buildings at a cost of 20 million dollars were in place in Durham. Now I’m not sure how many people even living in North Carolina much less elsewhere realize that this was the single largest depression era project in the United States. 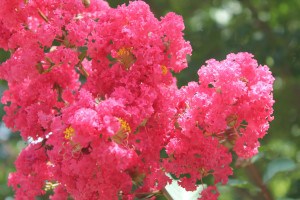 Duke today is an 8,000 acre campus, with 6,000 acres being the Duke Forest, with the Georgian East Campus and neo-Gothic West Campus on the remaining 2,000 comprised of quads, open lawns, woodlands, hollows, gardens, athletic fields, a golf course, plazas, parking lots and roads. Vast and complex, old and new, functional and beautiful, the Duke campus is a prime example of a traditional American campus landscape and is the element that physically (over 250 buildings) and visually unifies the University as a whole.

Staying at the Inn puts you right on the Duke campus which is handy for visiting their many famous sites or perhaps your favorite student. The Duke Chapel standing on the highest point at the center of West Campus was easy to find on Campus Drive, just keep your eye on the tower. Parking is quite close. Constructed from 1930 to 1935, the chapel is the only building on campus constructed with solid Duke stone walls. The Chapel has a 210 ft tower, a 50 bell carillon, 77 stained glass windows, three pipe organs and seating for 1,600 people. 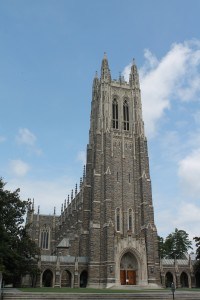 Tower of the Duke Chapel

You’ll think you’ve been transported to a European Cathedral and like every where you drive or walk on campus the grounds are beautiful. The Chapel is considered to be one of the last great examples of the Collegiate Gothic architectural style in the United States. It was first used for Commencement in 1932 and was formally dedicated on June 2, 1935. 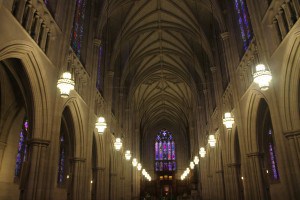 Interior at the Duke Chapel

Duke Chapel continues to be an interdenominational Christian church. All are welcome to take part in worship, learning, dialogue, and service. Although we did not participate in a service we joined a constant crowd of people coming to view the Gothic architecture and interior of the Chapel building. 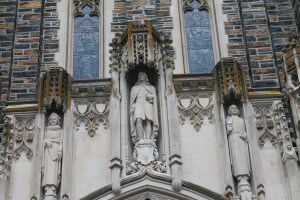 Duke Chapel has one of the largest congregations of any university church in the country. All are welcome to join in weekly worship service held each Sunday morning at 11:00 a.m.

James B. Duke wanted Duke University to not only provide a top education, but also a great campus setting with beautiful architecture and landscaping, with enough land to accommodate the potential for future expansion. The highly respected landscape architect firm Olmsted Brothers was hired to assist the architect in laying out the quadrangles, roads and pedestrian circulation system, along with the landscaping for both East Campus and West Campus.

Newer contemporary buildings are especially interesting as they combine the gothic feel of the original buildings with a modern flair.

Duke’s art collections are housed at the Nasher Museum of Art on Central Campus. The museum was designed by Rafael Viñoly and is named for Duke Alumnus and art collector Raymond Nasher. The museum opened in 2005 and contains over 13,000 works of art plus outstanding special touring exhibits.

The gift shop is interesting for mementos of your visit and the café features menus themed to blockbuster exhibits. On a heavily wooded site, it’s very light and airy inside an ideal environment for looking at art. The first time we visited, several years ago, we drove past twice after failing to peer into the woods thoroughly. It’s well worth your time and features outstanding exhibits from their own collection as well as special shows.

Another stop was the 55-acre Sarah P. Duke Gardens, established in the 1930s and hard to believe but situated between West Campus and the apartments of Central Campus. 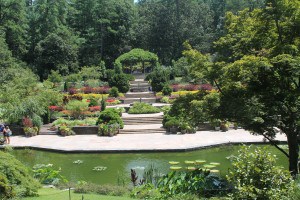 There are four major sections: the original Terraces and their surroundings; the H.L. Blomquist Garden of Native Plants, devoted to flora of the Southeastern United States; the W.L. Culberson Asiatic Arboretum, housing plants of Eastern Asia, as well as species found in Eastern Asia and Eastern North America; and the Doris Duke Center Gardens. 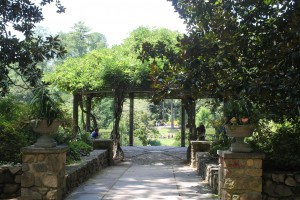 Many areas to sit and contemplate.

Bring water as there are five miles of paths throughout the gardens including hills and stairs. It was probably in the low 90’s on the day of our visit and we covered a lot of ground but certainly not all 55 acres! It’s very meditative with lots of areas to stop and reflect on the beauty of the plantings, water, wildlife and occasional sculpture. This is a great destination to let your kids run off extra steam. 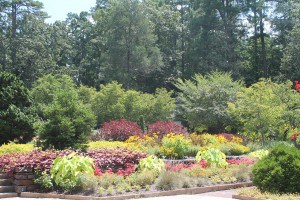 Colorful Blooms at the Gardens

Like all great gardens the vista changes with the seasons and one would never be disappointed spending time here.

The university spans over 8,600 acres on three contiguous campuses in Durham and includes the Duke Forest, established in 1931. Duke Forest consists of 7,200 acres in six divisions just west of West Campus. It’s the largest private research forest in North Carolina and one of the largest in the nation. It’s used extensively for research and includes the Aquatic Research Facility, Forest Carbon Transfer and Storage (FACTS-I) research facility, two permanent towers suitable for micrometeorological studies, and other areas designated for animal behavior and ecosystem study. More than 30 miles of trails are open to the public for hiking, cycling, and horseback riding.

Duke University is a major part of the city of Durham and well worth visiting even if you don’t have a student there or are alumni. See our other stories (coming soon) on eating out and various adventures in Durham.