Despite many visits to Sriracha, a city of 300,000 on the Bay of Bangkok, nothing prepared me for a tour of Koh Si Chang (Si Chang Island).

At Sriracha, 1.5 hours drive from the capital, we boarded a boat for the offshore island popular for its historic buildings and the former summer home of King Rama V, known as King Chulalongkorn who ruled for 42 years.

GETTING TO THE ISLAND 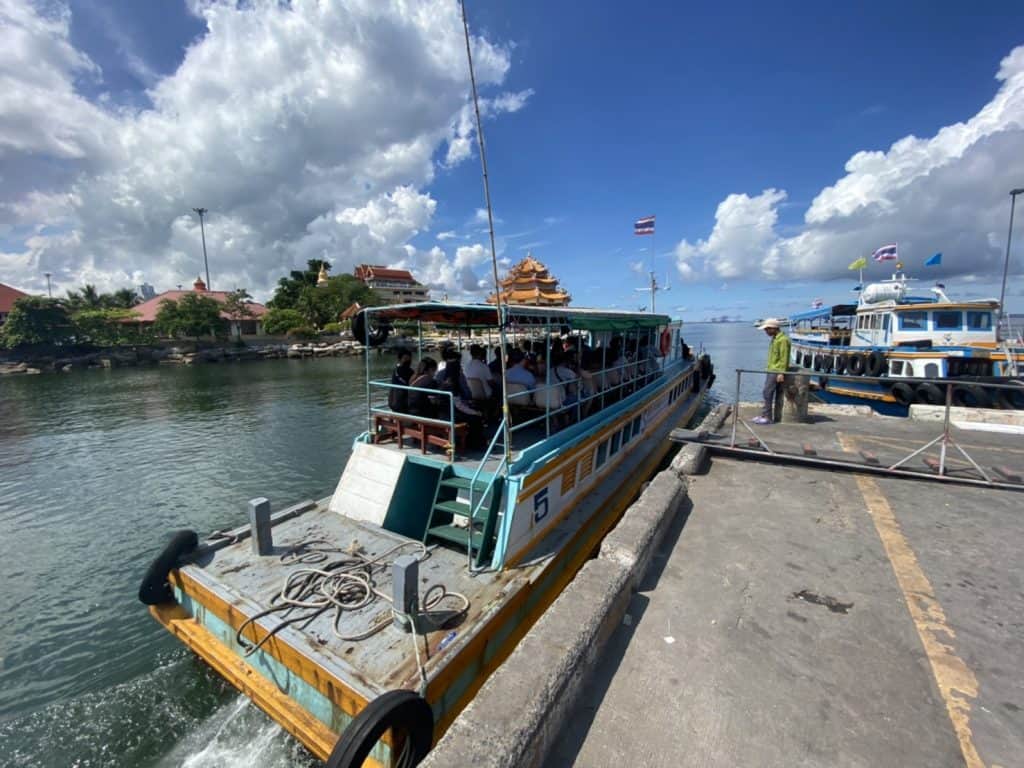 Another ferry at the dock in Si Chang.

Of course, when the island was shut down during the pandemic only local islanders could travel back and forth. Today travel has opened up slightly, but it’s still restricted to resident Thais and  foreigners. When that changes is anyone’s guess, but future visitors should put the island on their to-do list. 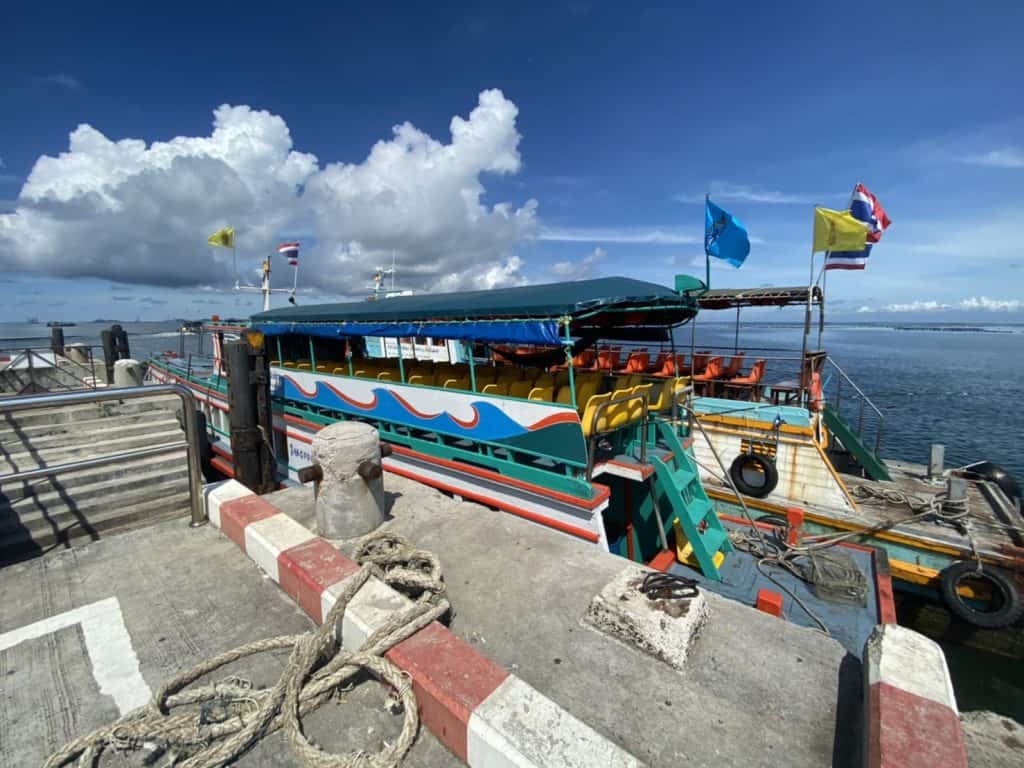 The boats to Si Chang.

Currently, there are 19 roundtrips  a day for 50 Thai baht (USD $1.50) a trip and 1,500 baht for a speed boat. At Sriracha’s dock, we left full at 10:05 AM, arriving at 10:40 AM over placid, turquoise blue waters with a brief stop at Koh Kham Yai Island.  At present, the crew will check body temperatures of passengers and require masks while they are on the boat.

I was one of the few “farang”–foreigner–on-board traveling with my Thai wife, her sister and two nieces. Nearly 487,000 visitors made the trip last year.

Welcome to Si Chang on the dock.

After disembarking, we headed to a tiny coffee shop on the dock, named Inthanin, and ordered beverages.Two foreign women were seen on the dock with a Thai as their guide. At the dock, there was no shortage of transportation for hire. For 250 baht (or about USD$75), we boarded a tuk-tuk, a motor scooter with seats for three and covered over for protection from the sun. That gave us up to five hours of travel on the island. To accommodate our five-member group, we had hired two of the local taxis.

Nearby, a small office distributed brochures describing in English the island’s 27 points of interest located in three geographic zones.

Points of interest on the Island.

During  the tour, the driver would wait while we took in the sights that included a Chinese temple high on a hill.The island is noted for its large Thai-Chinese population.

At the temple, our first stop on the tour, we entered and removed our shoes (as is customary). One of the nieces kneeled down and prayed to the “lady goddess” while incense burned nearby. A woman sitting in one of the temple buildings said she was 90 years old.

The island was quite hilly and full of shops selling all kinds of goods plus bars, restaurants, a hospital, a bank and the premier attraction, the former seasonal home of Thai King Rama V, which is known as Chudhadhuj Rajthan Palace built in 1889. It’s now a museum and  affords visitors time to explore it every day except Monday, according to the palace’s brochure. Photos of the current king, Maha Vajiralongkorn, the son of the late monarch Bhumibol Adulyadej dot the island. No royal residences now exist on the island.

The Island of Si Chang.

A tiny museum elsewhere was open while an older home had been converted into a snack shop. The former palace and its major buildings were eventually relocated in 1882. Among the existing buildings on the former palace grounds, however, visitors should see the Wooden House by the Sea, which serves as tourist office and an exhibition hall, the Phongsri Mansion, which recounts lives of important people on the island, and the Abhirom Mansion, which  exhibited small versions of buildings during King Chulalongkorn’s reign. The word mansion is not quite accurate, however, for these were relatively small structures.

We pass by the Sichang Palace Hotel and Resort, then travel over a rough road full of potholes to visit the hilltop Paree Hut Resort with its 18 thatched roof dwellings that overlook the water. Definitely, this was not a five-star property, and is frequented primarily by Thais and Koreans. Each dwelling was big enough for a double bed, a flat screen TV and a bathroom with a shower spray.

Accommodations on a hilltop at the Paree Hut Resort, Si Chang Thailand.

There were lots of steps to maneuver so wear comfortable shoes, but the mobility-challenged should look elsewhere for lodging. The mid-November 2019 price was 2900 baht or about $87 for two including breakfast. Current rates of hotels in other parts of the island  through February 2021 ranged from a low of $24 a night up to $80.

There are many restaurants around and we dined at Panoi Seafood Restaurant at a reasonable price.

The best time to visit sites is early in the morning before the heat and humidity set in or late in the afternoon.