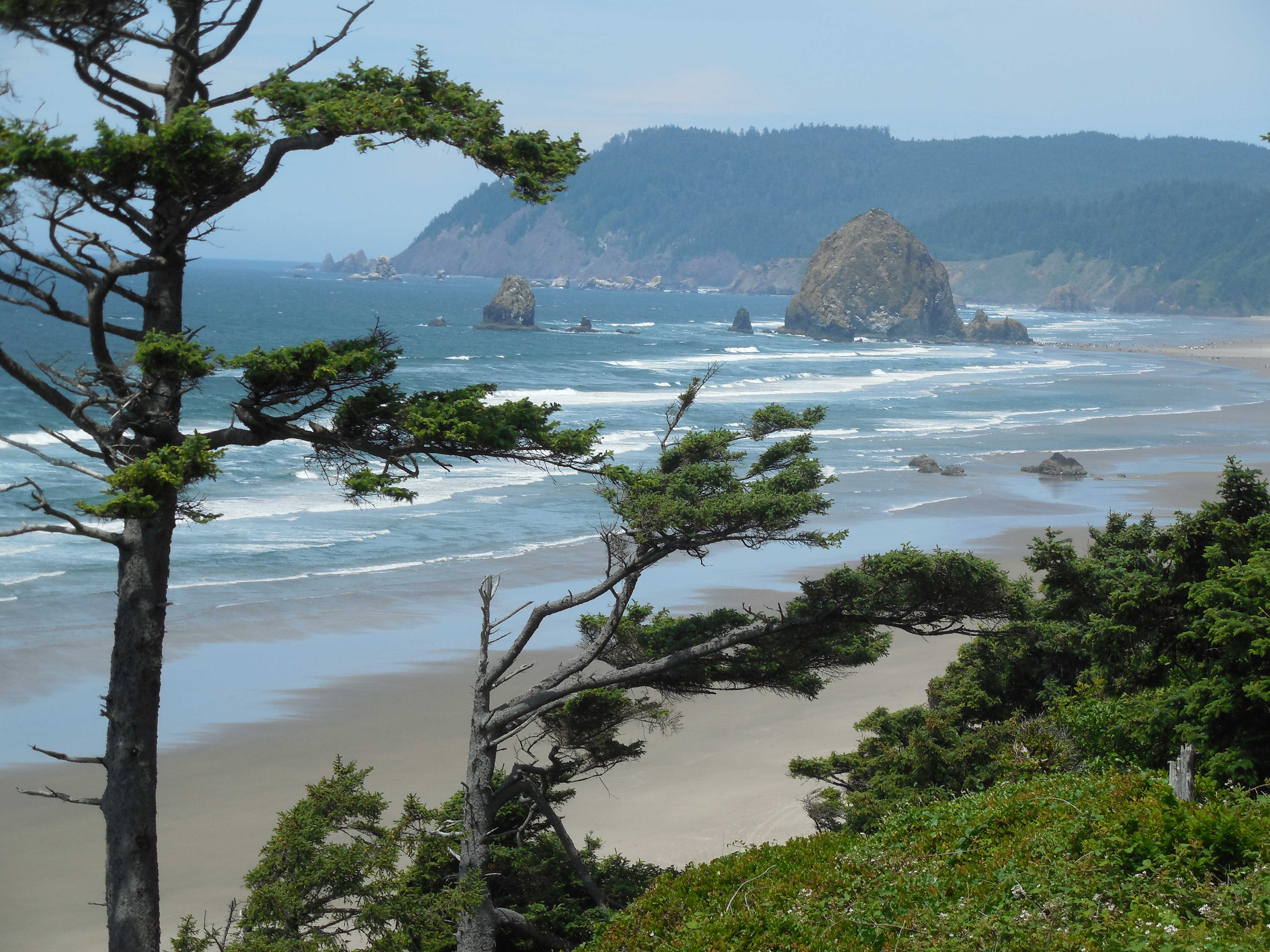 Story and Photos by Jeff and Stephanie Sylva

Where can you spend a couple of days touring outstanding wineries in one of the country’s best wine-producing valleys; sipping quality craft beers in local brewpubs; and then, in less than an hour’s drive, walking the beaches of one of the most picturesque coastlines in North America? No, we’re not talking about California (where on previous travels we have enjoyed some good wines and beautiful beaches). This is Oregon, and we think Oregon’s Willamette Valley and its rugged coast are natural treasures that would challenge what any other state may offer. 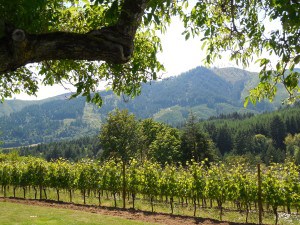 The more relaxed and casual wine region of the Willamette Valley was a welcome contrast to California’s Sonoma and Napa Valleys, which tend to be more crowded, touristy, and quite often expensive. We would suggest a visit to the Willamette Valley and some of its numerous wineries before it becomes too popular – sort of what Napa was about forty years ago.

Oregon is the 3rd largest wine producing state in the U.S., and the Willamette Valley is the state’s most productive region with 225 of the state’s 450+ wineries. The location of the Willamette Valley is ideal for wine growing, as it has the same latitude as France’s Burgundy wine region. Its cool climate makes it perfect for such varietals as Pinot Noir, Riesling, Gewurztraminer and Pinot Gris.  Pinot Noir is the Valley’s predominate wine, as nearly two-thirds of the wines from this region are of this varietal; while there is also much acclaim for the valley’s Pinot Gris and Chardonnay.

On the outskirts of Portland, literally just minutes from downtown, lies the gateway to Oregon Wine Country – Oregon’s Washington County. This region of the North Willamette Valley, known as the Tualatin Valley, is home to more than 35 wineries and tasting rooms and more than a dozen breweries. Being so close to Portland, it was an easy decision for us to visit this section of the Willamette Valley before heading out to the coast. 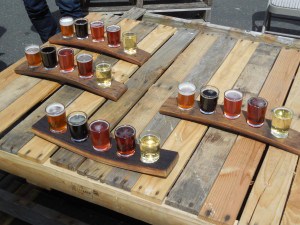 We spent two days exploring the Tualatin Valley and enjoying some of its viticultural and brewing treasures.  One afternoon we visited three craft breweries in the town of Hillsboro: Three Mugs Brewing Company, Vertigo Brewing and Ambacht Brewing. Each of these “neighborhood” breweries produce some unique craft brews and offer convivial taprooms perfect for enjoying some flavorful beer and lively conversation.

After sampling a variety of beers, we headed to downtown Hillsboro for dinner at Syun Izakaya, a family-owned, award-winning restaurant, which is housed in an old library, giving it lots of character. Syun Izakaya specializes in Japanese pub-style dishes, sushi and sashimi, and sake.  In Japan, people visit Izakaya-style restaurants to share friendship and food with family and friends.  We enjoyed ordering a variety of dishes to share – we were told this is the Izakaya style! 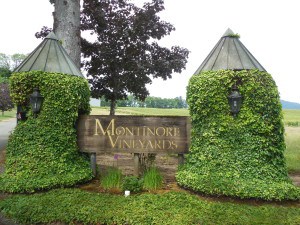 The next day we headed to the town of Forest Grove and visited two wineries there – Montinore Estate and David Hill Vineyards and Winery. Montinore Estate, a family-owned vineyard and winery, is among the top 25 producers of Oregon wine. With sweeping views of the coastal range, David Hill Vineyards is one of the most picturesque wine venues in Willamette Valley – a perfect spot to enjoy a picnic lunch and some delicious wine in an awesome setting.

We stopped for a late lunch at 1910 Main: An American Bistro, which specializes in classic American comfort food. Committed to supporting local growers, 1910 Main uses locally grown ingredients in its dishes and serves locally produced beer, wine and spirits.

We then continued to Sake One, the first American owned and operated brewer of craft sake in America. We tasted a 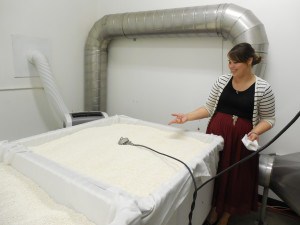 Rice preparation at the Sake One Kura

flight of sake and took a tour of the kura, the traditional brewery, to see how sake is made. We loved sampling some of the unique and delicious Sake flavors such as Asian Pear, Coconut Lemongrass and Plum. The final stop on our tasting tour was the Patton Valley Vineyards in nearby Gaston, where we tasted yet more samplings of some of the Valley’s fine Pinot Noirs.

That evening we stayed at McMenamins Grand Lodge in Forest Grove.  The McMenamins collection, operating since 1983, consists of 65 brewpubs, breweries, music venues, historic hotels and theater pubs located in Oregon and Washington. The Grand Lodge is a 70-room, European-style hotel, originally built in 1912 as a Masonic rest home. It includes a full-service spa, a soaking pool, disc golf, a restaurant, several lounges and bars, and is pet-friendly.

While having a drink at Pat’s Corner, where there is outdoor seating on the lawn, we enjoyed listening to live music as we watched the disc golfers engaging in this new sport craze.  We then headed to the front porch of the Ironwork Grill and enjoyed a delicious dinner as the sun was setting.

There are numerous options for outdoor recreation in the Tualatin Valley, so don’t restrict yourself to just the famous libations of the region. Scenic tour routes, nature walks, hiking, bird watching, kayaking/canoeing and biking are popular activities.  The Banks-Vernonia State Trail offers cycling and hiking opportunities on the car-less, 21-mile linear rails-to-trails path, winding through forest and natural, open-air spaces.  The trail also serves as the car-free portion of the 50-mile Tualatin Valley Scenic Bikeway, the first designated scenic bikeway in the Greater Portland region.  It helped us to work off a day of wine and sake tasting by walking part of this beautiful trail at the end of the day. 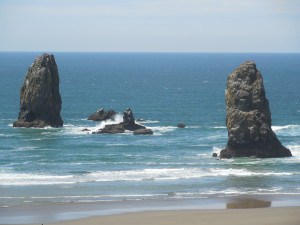 The Needles at Cannon Beach

After a couple days of experiencing the Tualatin Valley, we headed out to one of Oregon’s “Seven Wonders,” the Oregon Coast, which was an easy ride, as it is only 70 miles west of Portland.  We chose to stay in Cannon Beach since we had seen so many beautiful pictures of Haystack Rock and the Needles, formed millions of years ago by lava flows.  Haystack Rock is one of Oregon’s most recognizable landmarks with its colorful tidepools and diverse bird life.  We spent all morning watching Tufted Puffins nesting on the Rock and searching for starfish in the tidepools.  We were surprised to learn that Haystack Rock is part of the National Wildlife Refuge and is a state protected marine environment.

Cannon Beach was named by National Geographic Magazine as “one of the world’s 100 most beautiful places” in their June 2013 issue.  After experiencing its charming village, dramatic rock formations, beautiful beach and breathtaking sunsets, we can certainly agree.

Be sure to visit Ecola State Park, located at the north end of Cannon Beach.  We were mesmerized by the views from 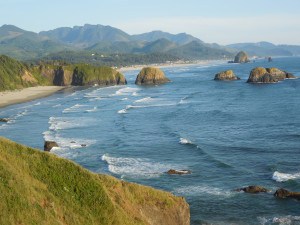 Ecola Point of the numerous rock formations and the historic Tillamook Rock Lighthouse situated on a lone rock in the Pacific.  The park’s Indian Beach is a popular location for surfers and was recently featured in the movie Twilight.  Paved walking trails and hiking trails lead you to these outstanding viewpoints and beaches.

We enjoyed some outstanding accommodations at the oceanfront Surfsand Resort while in Cannon Beach. The resort staff was friendly, courteous and extremely helpful, giving us lots of tips about what to see and do in Cannon Beach.

The “fun extras” provided by the Surfsand made our stay especially enjoyable. Saltwater taffy is always available at the front desk, homemade cookies come out every afternoon, and microwave popcorn is provided to enjoy while you watch complimentary DVD’s in your room. We signed out complimentary bikes to ride on the beach and into town. Sand toys are available for kids and planned kids’ activities occur throughout the year. Ice cream socials are held once a week, and on Sundays there is a Weenie Roast on the beach, followed by a bonfire with all the fixings for s’mores. 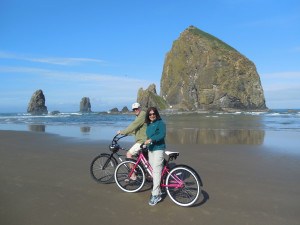 We were happy that our stay included a Sunday so we could enjoy this event. As we sat by the bonfire heating our s’mores, a glorious sunset added a perfect touch to a wonderful day. We enjoyed another perfect moment sipping a glass of wine (Pinot Noir, of course) on our deck while admiring the moonlit view of Haystack Rock.

We spent several days at Cannon Beach exploring, biking on the beach, browsing the shops in the village and loving the vistas.  However, there are numerous other beach towns to experience such as Astoria, the oldest permanent U.S. Settlement west of the Rockies; Depoe Bay, popular for whale watching; Newport, home to the Oregon Coast Aquarium; Florence, known for its sand dunes and Sea Lion Caves; and Seaside, known for its family fun.  Maybe next time – we simply ran out of time on this trip!