What’s More American Than A Bowl of Campbell’s Tomato Soup? 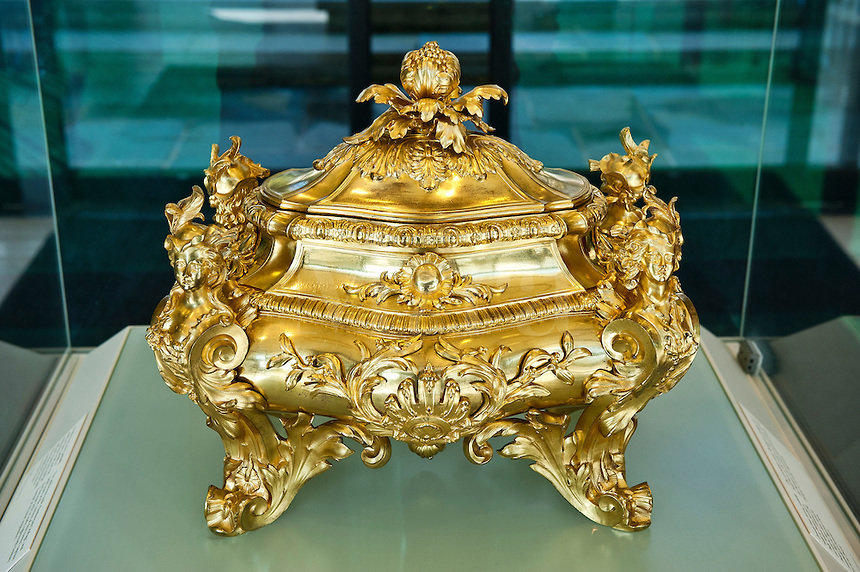 Winterthur, the former country estate of  Henry Francis du Pont near Wilmington, Delaware, now a renowned museum and garden, is home to the nation’s premiere collection of American decorative arts.  It is also where you’ll find one of the world’s finest collections of soup tureens, the Campbell Collection.

In 1966, John T. Dorrance Jr., chairman of the Campbell Soup Company, and W. B. Murphy, company president, begin collecting soup tureens to display at its corporate headquarters in Camden, New Jersey. The collection soon grew to include a wide range of tureens and soup-related objects made in Europe, Asia, and America. The dates range from 1720 to modern times.

During the early 1990s, it was decided that the Campbell Collection would benefit from relocation to a museum with greater curatorial, conservation, and educational facilities, and the transfer to Winterthur became a reality. The glass-walled Dorrance Gallery was created to house the works, and Winterthur curators have published an important, well-illustrated book on the collection.

Evidence of the existence of soup can be found as far back as 6,000 BC. The word soup comes from French “soupe” and from German “sop”, to soak up soup or stew with bread.  The first American cooking pamphlet dedicated to soup recipes was written in 1882 by Emma Ewing “Soups and Soup Making.”  Commercial soup became popular with the invention of canning in the 19th century.  John T. Dorrance, Sr. invented condensed soup in 1897.  Today, Campbell’s Tomato, Cream of Mushroom, and Chicken Noodle Soup are three of the most popular soups in America.

Many soups in past generations were in fact complete dishes in themselves and contained, apart from the broth and vegetable garnish, a wide variety of meat, poultry, game and fish.  Only the liquid part of these dishes, however,  retained the name of soup.

One of the best sources of soup recipes from the past is Colonial Williamsburg, Virginia.  Gazpacho, Cream of Peanut Soup, Corn Chowder, and Tidewater Chili, and Carolina Fish Muddle are among the soups enjoyed by our American ancestors.

The Campbell Collection contains several exquisite mental tureens both silver and gilt brass. However, most are of ceramic including both porcelain and earthenware.  In some cases, the design indicated what the contents — a tureen in the shape of a chicken might be for chicken soup.  However, many of these tureens have been made purely as decorate objects. 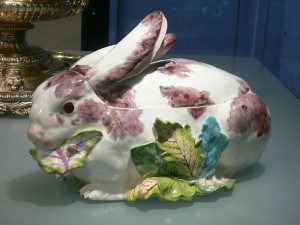 On March 11, 1755, the Chelsea (London) auction catalogue offered “a fine porcelain tureen in the shape of a rabbit as big as life, in a fine oval dish.”  Two tureens in the Campbell Collection conform to that description, although they no longer have oval dishes or stands.

Figures of rabbits and hares were popular ceramic ornaments, but tureens in the form of life-size rabbits appear to be peculiar to the Chelsea factory.

The most contemporary tureen in the collection is by clay artist Bill Stewart of New York City.

The earthenware piece is painted in brightly colored glazes and was made for a 1976 exhibition of contemporary soup tureens organized by the Campbell Museum. It seems unlikely this whimsical piece (with a clown sitting on the back of a pig standing on an alligator) was ever intended to be used as a tureen. 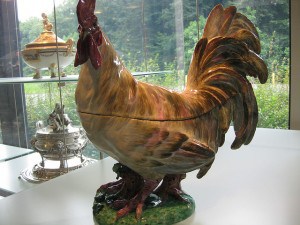 A tin-glazed earthenware tureen in the shape of a turkey (circa 1755) is by Paul-Antoine Hannong of Strasbourg, France. Turkey tureens of a different model with more detailed painting are also recorded as the work of Hannong.  Large Soup tureens in naturalistic forms such as animals and vegetables were a fashion expression of rococo taste in eighteenth-century Europe. They were first made by German factories, particularly the Hochst factory, from where the fashion spread to Strasbourg and then to the whole of France.

While its maker is unknown, a spectacular gilt brass tureen is probably from France (circa 1730) is a promanent item in the collection. Its most pronounced features are its scrolled legs with human busts, two male and two female.

It is difficult to imagine it was ever used to serve soup.

The painted decoration on another tureen is usually attributed to Aesop’s Fables, however, in this case the subjects seem to be inspired by published illustrated fables of the time rather than the fables themselves.  From the Chelsea Porcelain Factory, London, England (circa 1754), it is made of soft-paste porcelain.

A tin-glazed earthenware tureen (circa 1750), modeled with eagle’s head handles and a naturalistic rose knob, is the most commonly seen form from the Strasbourg factory in France, and is represented in many major museum collections. 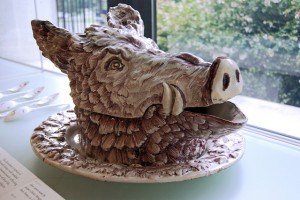 Possibly my favorite tureen in the Campbell  Collection is a large Boar’s Head.  The tin-glazed earthenware from Denmark (circa 1770).  Problems associated with creating large molded pieces of this kind include instability of the ceramic body at high temperatures during the firing process. That condition left this poor beast warped and with a slightly lopsided grin.